Disclaimer: I’d like to start off this piece with a clear and concise statement regarding my stance on the current situation. I do not — and will not — openly take a stance on the issues discussed herein. Therefore, this was not written with an agenda or motive to argue one side or the other. Everything here is merely stated to explore why Joss Whedon “quit” Twitter, since there are many theories currently and no one knows which is right.

If you decide to join the discussion, please refrain from flaming, insulting others and writing volatile remarks. We encourage you to talk about these issues further, and would love to hear your thoughts on the matter, and even your stance, just please keep it friendly and courteous. Thank you for understanding these guidelines. Comments that violate these terms will be promptly removed.

Joss Whedon decided to “quit” Twitter once again. You may remember he did the same back in 2013, but back then he likened it to a second “job” and said that it was taking up too much of his time. Obviously, he since returned to the platform — likely to market for some of his high-profile projects like Avengers.

His final Tweet went out earlier today (May 5, 2015), and in it Whedon thanked his loyal fans before signing off.

Whedon didn’t say anything about why, so we’re left with nothing but speculation. However, we’re going to explore some reasons why he might have finally decided to delete his account.

The most obvious reason is that Whedon has been getting a lot of vitriol and hate for the way Black Widow is portrayed in Avengers: Age of Ultron. Now, I’m not going to say how I feel one way or the other — like I promised above I’m staying out of this argument. However, I will say that it’s reprehensible people are sending death threats, threats of violence and hurting others over this.

I mean, some of this stuff is sickening, regardless of what you stand for. Take a look. 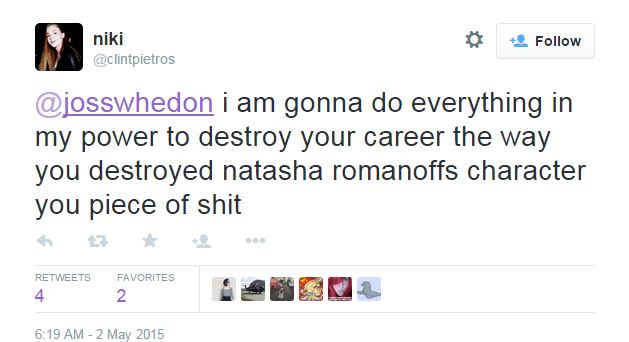 For a moment, take Whedon’s name out of those tweets and imagine yours in its place. How would you feel if these people were doing this to you. If you took part in this attack on Whedon’s character (or even one of the people shown above), imagine how you would feel if someone did this to a person you cared deeply for, let alone yourself.

It’s not hard to see why Whedon may have felt the need to leave Twitter.

Did Anyone Defend Him?

Fellow Marvel director James Gunn also came out in defense of Whedon. His response is particularly relevant, given his close working relationship with Whedon. If anyone know what was going on in his life to get him to leave Twitter so suddenly, Gunn is a likely candidate.

There are certainly other possibilities for why Whedon may have left Twitter though. While this certainly looks bad, as Whedon is catching a lot of flack, it might be nothing more than background noise. Seriously, there are millions going to see this movie and talking about it on social media. Not all of those people are busy attacking others.

An alternate theory is that Whedon simply felt that using Twitter was taking up too much of his time. A point that Whedon made in an interview a few years back is that becomes “like a drug.”

During an interview with Entertainment Weekly, Whedon explained that it was too much and that’s why he quit before (back in 2013), that may be why he quit now too. Age of Ultron was a tremendous success during it’s opening weekend clearing $191 million, so there’s no need for him to market anymore.

I joined [Twitter] six months ago to specifically try to drive business to Much Ado because I figured Much Ado needs all the help it can get. The moment I joined, oh my God, what a responsibility, this is enormous work—very fun, but it really started to take up a huge amount of my head space. I’m making a movie, I got a responsibility, this job doesn’t pay very well. It’s a fascinating medium, it’s a fascinating social phenomenon. People are like, “It’s like a drug.” Yeah, and it’s like a job. It’s just another art form. Until I have a script I truly believe in or a tweet that’s really remarkable, I can just walk away and get back to the storytelling I need to do.

It’s clear from that statement that Whedon doesn’t want to devote the time necessary to maintain an active Twitter profile, but also that he doesn’t feel there’s enough return for his investment. I can definitely understand where he’s coming from with that perspective.

Did Whedon Feel Too Restricted?

Ignoring all the death threats and vitriol for a moment — which can certainly make you feel constricted — Whedon recently Tweeted that Marvel didn’t want him to address any controversial topics. It’s unclear what the studio set for restrictions, but they likely didn’t want Whedon bringing the studio bad press and so they included something in his contract.

It’s possible that Whedon may feel passionate about a lot of these issues, yet cannot say anything due to a nondisclosure agreement of some kind. After all, it was Whedon who recently criticized a Jurassic World clip for being too misogynistic.

Whedon may not have been able to argue his stance on the matter, and worse yet he probably couldn’t defend himself — not without suffering consequences from a potential agreement with Marvel, anyway.

Feeling too restricted by all of the outside players, this may have led Whedon to delete his Twitter if only to prevent a situation where he’d get himself in hot water with Marvel studios. I can definitely understand that move. If this is the reason why, he’s removing himself from the equation and eliminating the possibility that he might say something controversial through Twitter altogether.

Is Joss Whedon in Line to Direct Star Wars IX?

by Ryan Matsunaga on May 7, 2015
Joss Whedon is undeniably one of the biggest names in filmmaking right now. He managed to do the impossible with The Avengers in 2012, and in the ensuing years, has masterminded Marvel’s connected vision on its way to become the most successful [...]

Actually, Joss Whedon Quit Twitter to Get Some Work Done

by Overmind on May 6, 2015
Yesterday, we discussed a few reasons why Joss Whedon may have quit Twitter, for the second time. We explored some possibilities, one of which had to do with the fact that Twitter is distracting, and Whedon said as much in the past. It turns out, [...]

Spider-Man Was Almost in Avengers: Age of Ultron

by Overmind on May 6, 2015
Before Avengers: Age of Ultron hit theaters, fans believed that Spider-Man would be joining the group. Now that the movie is out, we know that’s not the case. If it were up to Joss Whedon, he might have been.
POPULAR
Try a different filter
Featured
The Definitive Chronological Viewing Order For The Marvel Cinematic Universe
by Ryan Matsunaga
MCU
READ STORY
Copyright © 2018 Overmental, All Rights Reserved.
Villainy | www.Villainy.media