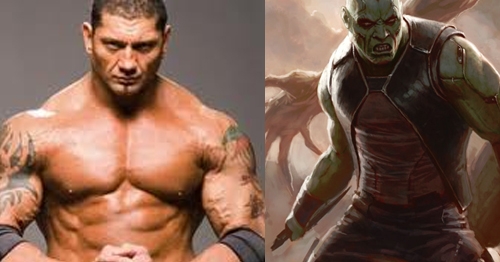 The long, long road to a complete Guardians of the Galaxy cast continues, with the second bit of official news. Dave Bautista, former pro wrestler and current mixed martial arts fighter, has officially signed on to play Drax the Destroyer.

Previous rumors pinned Jason Momoa as Drax, but after a few weeks of contract negotiations, it looks like Marvel has moved on. THR reports that the deal is closed, and describes the character as:

“a human resurrected as a green warrior with the sole purpose of killing Thanos (the villain in the final-scene tease of Avengers). His powers include flight, super-strength and energy blasts.”

Chris Pratt was previously cast as the film’s lead, Star-Lord. We’re still waiting on casting news for Groot, Gamora, and the voice of Rocket Raccoon. Guardians of the Galaxy is currently set for a August 1, 2014 release date.

And Our First Guardians of the Galaxy Vol. 2 Casting Is…

by Ryan Matsunaga on October 29, 2015
We still have a ways to go before seeing the next Guardians of the Galaxy, but the casting process has already begun on a number of important roles.

by Andy Gordon on September 14, 2015
Steven Spielberg has made his first Ready Player One casting decision.