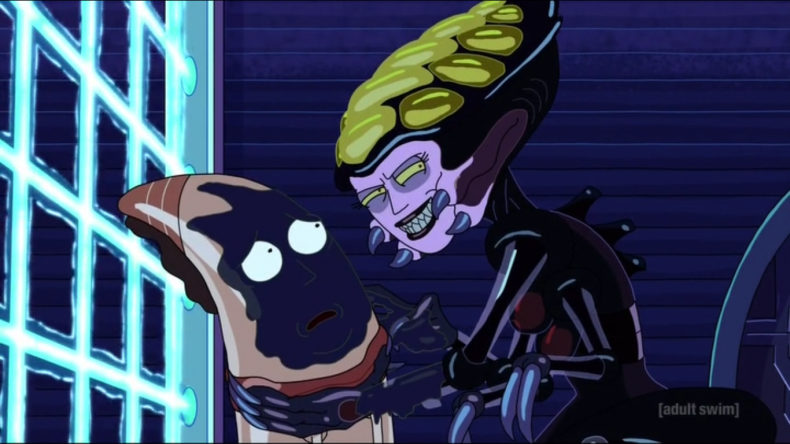 On last night’s episode of Rick and Morty, “Big Trouble in Little Sanchez,” Rick’s consciousness is trapped in an angst-ridden teenage brain, and Beth and Jerry’s marriage counseling goes the way of Jurassic World.

The unique joy of Rick and Morty isn’t just the gloriously freewheeling sci-fi premise, it’s that the comedy feels like a stand-up routine adapted for a sitcom–and I’m not talking about dime-a-dozen Family Guy one-line cheapshots, but full-formed routines complete with setup, punchline, and expansion. Unlike other absurdist Adult Swim productions that cater to the nocturnal brain, Rick and Morty takes its cues from the mundane, and that foundation gives it a relatability that translates into real wit and bite. Of course from there, brain-swap hijinx and alien insect queens take over, but damn, that foundation…

A failing marriage doesn’t sound like the most interesting scenario in a series that claims interdimensionality and intergalactic locales as its stomping ground, but writer Alex Rubens manages to cut deep into that well-trod material and pull out a shtick that’s truly genius.

Sick of Beth and Jerry’s constant bickering, Rick drops them off at the most well-renowned marriage counseling program in the universe, located on the planet Nuptia IV. Through the power of futuristic science, the counselors are able to turn Jerry and Beth’s mental perceptions of each other into living, breathing creatures.

That’s a scenario worth a dinner conversation: “If we pulled your idea of your significant other out of your mind, what would it look like?” Jerry’s ‘mythologue’ of Beth is a black-shelled queen bitch modeled after the xenomorphs from Alien, but that pales in comparison to Jerry’s mythologue, a sniveling slug-like creature who responds to aggression with an obedient bend-over. Absolutely. Brilliant. And once again, I love that you can almost trace the joke’s birth back to the original conversation in the writers’ room, or on the phone, or in line for coffee–it’s got an organic complexity that’s a step above.

The whole point of this is that the couples are able to externalize their perceptions of each other, see how far the idea falls from the reality, and use that as a basis for change. But where the mythologues are supposed to tear each other to pieces, Jerry and Beth’s relationship somehow transcends simple self-destructive behavior into something oxymoronically sustainable, sort of like if you got hit by a car and are pinned up against a wall, and the only thing keeping your guts together is the car. Consequently, mythologue-Beth dominates mythologue-Jerry, and they cooperate, break free of the facility, and wreak havoc. Eventually, Beth is confronted with Jerry’s titanically powerful and cunning perception of herself, and Jerry has to deal with knowing that his wife thinks he’s a wormlike buttslave.

From there, the writers ride the gimmick even further towards its logical conclusion; mythologue-Beth kidnaps Beth and forces her to create an army of mythologue-Jerries, but she’s foiled by Jerry, who’s newly emboldened after confronting the disgusting display that is mythologue-Jerry. It’s great fun to watch Beth’s perception-clones of Jerry change shape according to his actions, from worm, to idealized He-Man, to swollen-head Jerry. The scene concludes when Jerry puts the cloning-device on the head of idealized He-Man Jerry, whose perception of Beth must logically be idealized Goddess-Beth. Well-played, writers.

It may seem tiring to have Jerry and Beth’s marriage constantly dangle by a thread episode-to-episode, but the writers have pulled some brilliant gags and insights from the scenario, as in “Rixty Minutes,” when Beth and Jerry glimpse their successful alternate-reality timelines wherein they never hooked up, and realize that there would’ve always been a gap that only the other could fill. Rick and Morty is fabulous for knowing when to double-down on meaning and moral, and when to cut them short (as opposed to say, the latter half of Bob’s Burgers season 5); hence, “Big Trouble in Little Sanchez” is a beautiful rallying cry for atypical relationships, while also delivering painfully clever gags.

But we haven’t even gotten to the episode’s namesake yet–the episode’s subplot sees Rick’s mind transferred into the body and mind of a teenager’s, at first in order to rid the school of a vampire, then later, simply to d*ck around. The plot initially revolves around the visual gag of Tiny Rick (which the writers realize, and capitalize upon), but morphs into a meditation on adolescence. After being trapped in the young mind of Tiny Rick (who becomes the most popular kid in school), all of Rick’s adult cynicism is sequestered into the brain’s subconscious, and Rick’s consciousness is submerged beneath Tiny Rick’s perpetually partying personality, only to be revealed through angsty art and an absolutely jaw-dropping parody of 90’s Caucasian acoustic alternative tunes, delivered, of course, by Tiny Rick in an impromptu performance at a house party. You will never listen to “Closing Time” without laughing, ever again.

The crowning joke of the subplot (maybe the episode) is when Summer and Morty use the existential woe of an Elliott Smith track to get Tiny Rick to confront the crushing reality lurking in his subconscious, bringing him to his senses long enough to get him back into his original elderly body.

Rick and Morty Will Be Back for a Third Season

by Andy Gordon on October 12, 2015
Given how Rick and Morty Season 2 ended, we’re all very, very glad to hear that it’ll be back for at least one more season.

The Weird, Wonderful Worlds of Rick and Morty

by Ryan Matsunaga on October 8, 2015
Rick and Morty (and Summer and Beth and Jerry) sure do visit some interesting places.

Rick and Morty’s “Get Schwifty”: Eurovision in Space