The Annotated Adventure Time: The Tarotic Journey in “Stakes” Pts. I & II 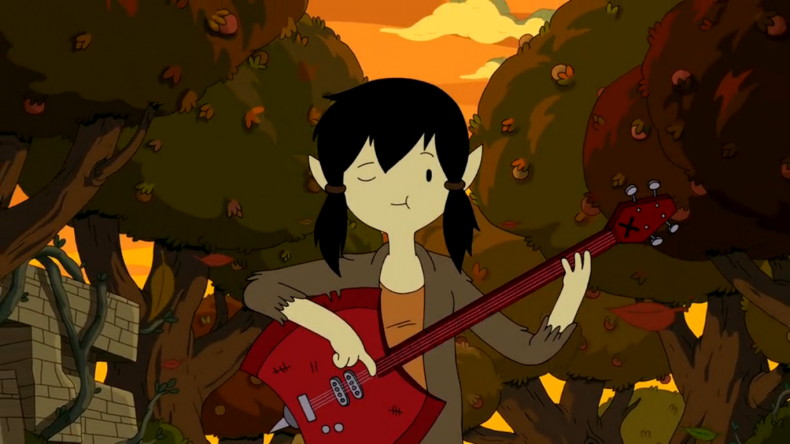 On Adventure Time’s “Marceline the Vampire Queen” and “Everything Stays,” Marceline remembers her childhood as Princess Bubblegum attempts to cure her vampirism, But the process has unintended consequences, and Marceline soon faces a threat from her past.

The Marceline-centric “Stakes” miniseries continues the series’ trend of characters aging into later life stages and contending with the relevant issues; Princess Bubblegum is already in the midst of a midlife crisis, struggling to find purpose after her ousting from the Candy Kingdom, and at the end of the previous season, Finn’s made his peace with the unordered universe and is transitioning into his mid-teens with a healthy embrace of uncertainty. In that vein, Marceline’s the obvious progression as a character who’s been stuck in her teens for thousands of years.

As she tells Princess Bubblegum, that’s the impetus behind her decision to cure her vampirism and become mortal: millenia trapped in an angsty transitional period is no way to spend a lifetime. In the context of the series’ focus on the importance of childhood, it’s interesting that Marceline is basically making a conscious decision to end her childhood and move on. She’s been shielded this entire time from not only the threat of death, aging, and adult life in general, but also the healing process that comes from that aging. As she puts it, she’s been a messed-up child for far too long. 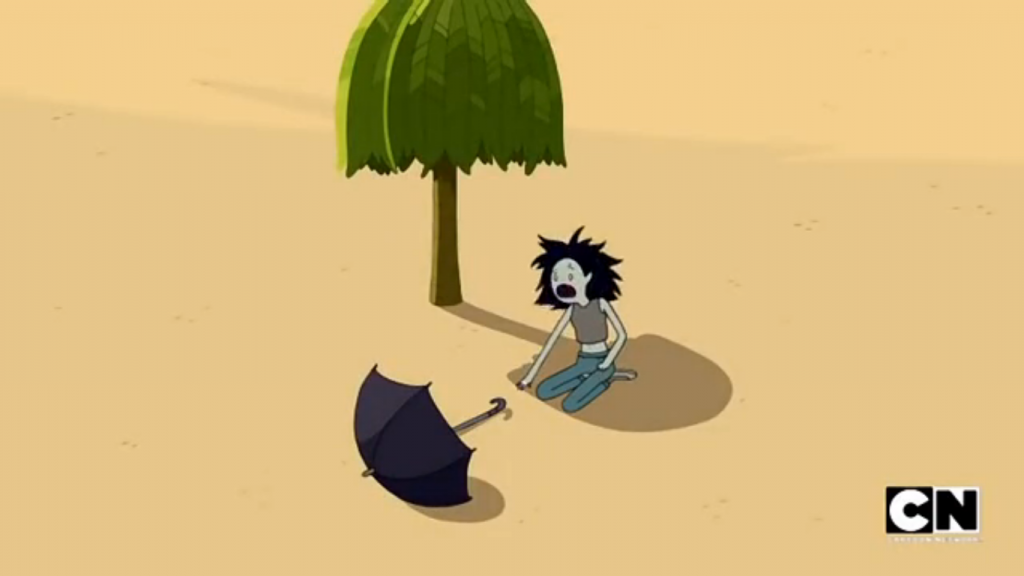 Princess Bubblegum goes ahead with her experimental cure, unsure of the side-effects but eager as always to test her theories and new science equipment. It’s nice to see that after all the turbulence in her character arc, she’s retained her lust for progress and experimentation, almost to the point of her usual coldness, but she veers from it in the end, reassuring Marceline throughout the procedure. Bubblegum is again in the mothering role, telling Marceline just what to expect from a mortal life in an attempt to assuage her fears, in an oblique version of the puberty talk.

That same night, Marceline dreams of feeding upon a cow, something she normally never does as she eats the color red instead of blood like a typical vampire. Disgusted with herself, she discards her fangs, and afterwards falls into pieces, which form five shadowy figures assailing her. In the morning, the nearby villages find their livestock exsanguinated, leaving Marceline as the obvious culprit. As this and the next episode will show, Marceline’s fearsome aura and the distrust it initially inspires in others highlights her unnatural lifespan and the unhealthiness of her Peter Pan syndrome, her refusal to grow up and face her insecurities.

While investigating the livestock attacks with Marceline, Finn and Jake catch the culprit in the act and track it back to a lair full of delirious, pallid, and desiccated-looking farm animals. Jake faints, and Finn follows the creature back to where they left Marceline to rest, but instead finds her tied to a windmill facing the rising sun, as the local villagers seek to destroy her Wicker Man-style. 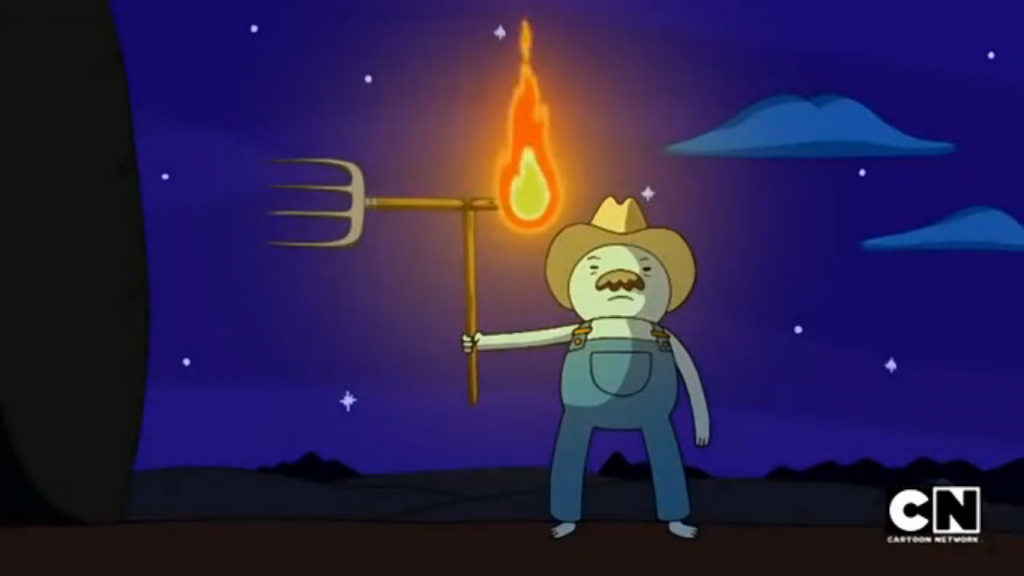 Before what looks to be an imminent death, she remembers her childhood with her mother, how she used to have terrible dreams where nothing was recognizable, and her mother’s song reminded her that all change is frightening at first but will reveal blessings in time. Unfortunately, the message of acceptance is lost upon the twice-orphaned Marceline, who remembers also the day Simon Petrikov left her in the snow in order to shield her from the increasing madness brought on by the Ice Crown’s influence. Before he left, Simon comments on how one day Marceline might be his savior, and perhaps it was that sentiment, combined with the loss of both parental figures, that anchored Marceline so firmly into a pattern of defense, of shielding.

Jake awakens in the creature’s lair in time to spy five shadowy figures eerily jamming away in the dark of the forest, whom we learn to be vampires vanquished by Marceline in her distant past, but who’d been freed by the curative procedure. After Simon’s departure, it seems Marceline spent her days eliminating vampires from the pre-Ooo landscape and consuming their souls and vampiric abilities, in order to protect fledgling human tribes that just so happen to wear animal hats (!) to protect their necks from vampire bites.

It’s likely at this point that this is the same human tribe from which Finn descended, given his own bear hat. It remains to be seen how Martin’s story still fits into their history, especially as the tribe fled the continent in fear of attacks from vampires, “hungry-lookin’ rainbows” (anyone else remember that Rainicorns used to eat humans?), and some unnamed natural disaster that was to befall the land. 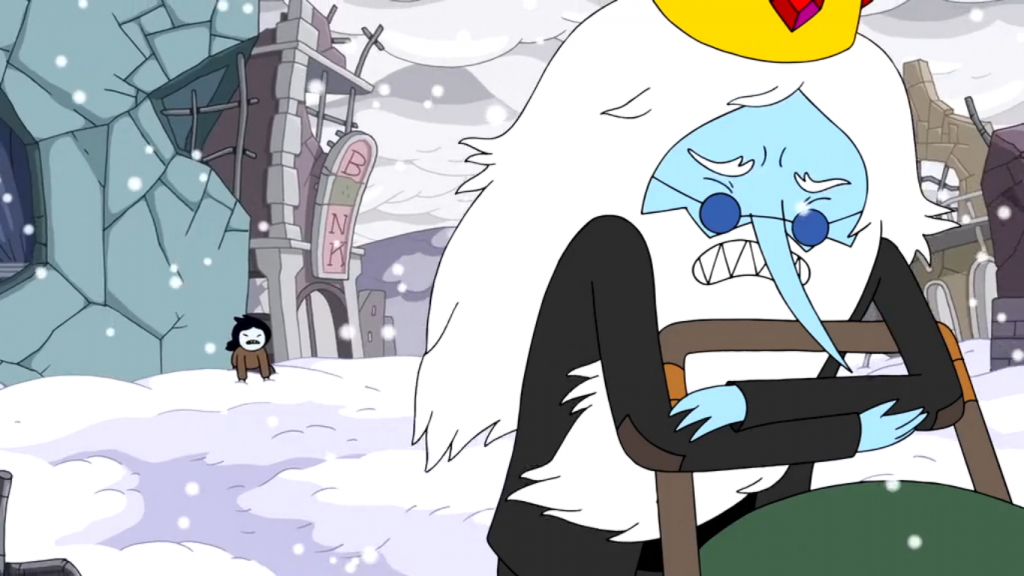 Marceline’s fear of change is apparent in the parallel between the human survivors and Simon Petrikov, the latter who was lost to her in a tragic metamorphosis brought on by the Crown, and the former who live in fear of being bitten and transformed by roving vampires. She’s a reminder of that precise moment when we all realize that not only do people die, but our parents will one day pass as well. Marceline thus hopes to save the human tribe the way she couldn’t save Simon, and the consequences come to mark her forever.

In the past, Marceline had vanquished The Fool, Sister Moon, the Hierophant, and the Queen and King, five arch-vampire personalities named after the first six trumps of the Tarot’s Major Arcana, which is the 22-card series that you most often see crop up in pop culture. The meaning of the Major Arcana is open to interpretation, but one of the most popular is that the Major Arcana tells the stages of human psychological development, starting with the hapless Fool (the child), and progressing into the High Priestess and the Hierophant (the male and female imparters of worldly knowledge), and the Empress and Emperor (the ruling parental figures that must be transcended to enter into later life stages). The one card missing from this series is the Magician, and unless a sixth vampire is revealed, this is presumably Marceline, which is fitting, as you can see the Magician personality as the figure progressing through the stages of the Major Arcana in search of his or her more complete self. 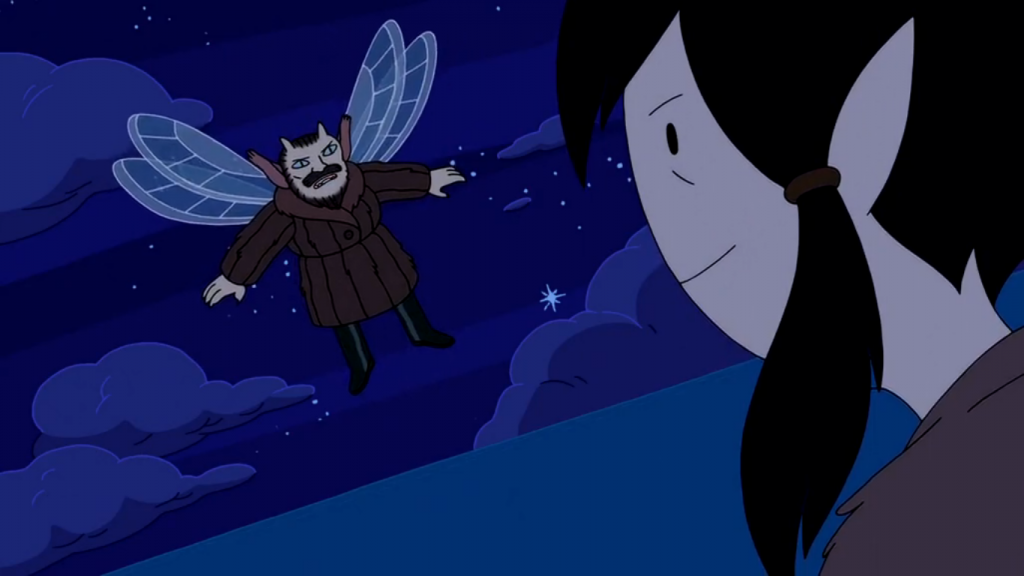 In light of the tarot’s meaning, Marceline’s journey is that of all adolescents who are moving past the tutelage of their parents, past the societal laws held by priest and priestess (which seems arcane to us now but made perfect sense in older religious societies), and into the later formative stages of life. Until now, Marceline’s development has been held in cessation; but in the present moment, as the rising sun falls on her face and she finds herself unscathed, that may be about to change.