TV
0
previous article
Confirmed: Next Wolverine Movie is Hugh Jackman's Final as the Character
next article
The Annotated Adventure Time: How to Talk to Kids About Doomsday in "Graybles 1000+"

The Wachowski’s Sense8 Trailer Debuts, What Do We Know So Far? 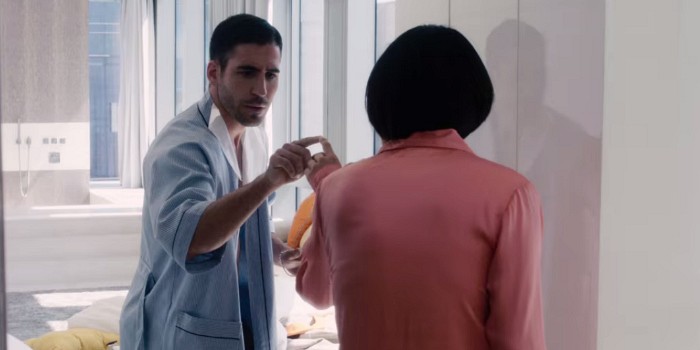 While the Wachowski’s Jupiter Ascending didn’t perform that well critically or financially, their next project, the Netflix original series Sense8, is showing far more promise. But how much do we really know about the series? We’re here to take a look at the trailer and figure out what we can.

So, what’s the series about?

Based on the trailer, it’s about eight strangers who suddenly find themselves mentally and emotionally connected through technology. How they were implanted with such technology, we aren’t sure… but Naveen Andrews’s character seems to be in on the secret.

J. Michael Straczynski of Babylon 5 fame, as well as Andy and Lana Wachowski, so expect to see their trademark styles all over the show.

Who are these eight characters?

They are referred to as “Sensates” and have access to each other’s knowledge, abilities, and emotions whether they like it or not. According to the original press release, “The series follows eight characters around the world, who in the aftermath of a tragic death, find themselves linked to each other mentally and emotionally. They can not only see and talk to each other as though they were in the same place, they have access to each other’s deepest secrets. Not only must they figure out what happened and why and what it means for the future of humanity, they must do so while being hunted by an organization out to capture, kill, or vivisect them.”

The character breakdown is thus:

Will: a Chicago cop.

Capheus: a bus driver in Nairobi.

Kala: a pharmacist in Mumbai

Nomi: a trans woman living in San Francisco as a blogger.

So the show’s about them finding each other?

Actually, according to the show runners their characters won’t physically meet in the first season. Though, because of their connection they will be interacting with each other in various indirect ways.

Someone seems to be hunting them…

Yup, the stereotypical shady organization (maybe they’re an offshoot from the guys on Orphan Black) is trying to capture or kill them… which will probably end up forcing our characters to rely more on their newfound connection. When will these villains ever learn to just leave people alone?

Nope. Each episode will follow one character and tell their story, though obviously they will be interacting with each other through their special connection. There seems to be about 12 episodes in the first season, which means some people will get two episodes.

When will the show premiere?

June 5th, so it’s right around the corner. Get ready to binge watch that weekend!

Aaron Edwards is a Los Angeles based screenwriter and filmmaker. On one faithful night when he was five, he sneaked out of his room and watched Aliens on cable. Soon after, he fell in love with storytelling and has been a big ol' nerd ever since. You can follow him on twitter @aaronmedward
You might also like
NetflixTVTV News

by Ryan Matsunaga on February 20, 2018
On this page, we’ll be counting down to the premiere of Jessica Jones‘ second season, keeping track of all of the new trailers, announcements, and news.

The Daredevil Season 2 Trailer is Here!

by Andy Gordon on February 15, 2016
The full-length trailer for Netflix’s Dardevil Season 2 has arrived, and it’s not playing coy about the new guy in Hell’s Kitchen.