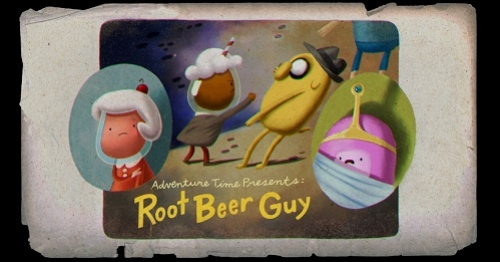 On last Monday’s episode of Adventure Time, “Root Beer Guy,” your average-joe candy citizen witnesses Finn and Jake kidnapping Princess Bubblegum, but when the local Banana authorities refuse to listen, he must handle the case on his own. It’s the eponymous time again!

“Root Beer Guy” is another loving ode to the detective noir genre, first explored in “BMO Noire.” The episode captures the essence of what makes the story archetype fun and engaging: in the midst of mundane, inner-city life, there are signs that things aren’t as they seem–an irreconcilable event (theMacGuffin, if you will) hints at a deeper, underlying truth, and as the protagonist unravels this event, he discovers a submerged aspect of himself as well. The episode is piquant for its reversal of point of view (life as the common candy man, coexisting with heroes like Finn and Jake), surreal thanks to its effective MacGuffin (F&J: heroes by day, shadowy thugs by night), and hilarious for its Banana guards. 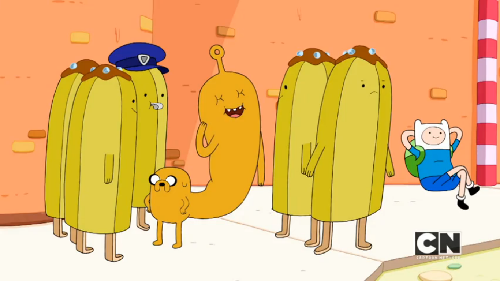 Root Beer Guy is our classic everyman, dissatisfied with the confines of his urban environment but quite lost as to the solution. Even the Candy Kingdom has its humdrum occupations, and RBG has the worst of them: telemarketing. When he’s not in his workplace cubicle, surrounded by coworkers and their incessant talk of how to ‘get ahead,’ he leads a reserved homelife with his wife Cherry Cream Soda. As caring and patient as she is, Root Beer Guy seem always to be dreaming elsewhere, as when he forsakes their marriage bed at night for the kitchen and typewriter, where he’s been writing the detective novel of his dreams. For ten years. 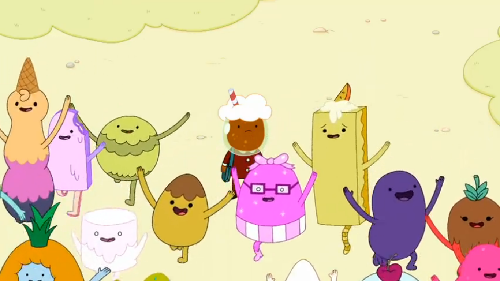 Welp, the magic of Adventure Time is that you get to watch dreary narratives like this, but in the trappings of a 7-year-old’s playtime reverie. I had this exact exchange with my girlfriend:

She wasn’t off the mark though – RBG’s existential funk is well-portrayed, from the airplane that flies over his workplace, free as he’ll never be, to the fantastic voicework of Jack Pendarvis, who lends a distinctly small quality to the character of Root Beer Guy. We get the impression of a little vanilla-flavored man with the hopeless dream of being a tiramisu-flavored hero.

But back to that airplane – the episode does some world-building in imagining the Candy Kingdom, or at least portions of it, as a concrete honeycomb suited to the noir theme. We have subway systems, business and residential districts, and paved roads outside of the Kingdom lined with telephone poles. If the trend is consistent, the Candy Kingdom is being pushed further and further down the ambitious path that Princess Bubblegum has imagined for it, as discussed in last week’s article. 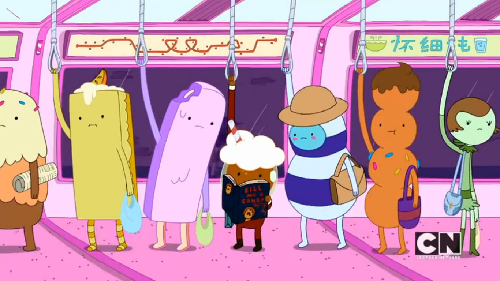 In fact, it’s interesting that in going with this noir theme, the Candy Kingdom is seen in light of the corresponding era: it feels like post-WWII America, a period commonly remembered as idyllic and simpler times, before a jaded cynicism towards politics and social issues embedded itself into the mainstream consciousness. And if the series continues with the hints from last week’s episode, “James,” this is the Candy Kingdom right before it begins its colonialist ventures. How creepy is that? I don’t know if it’s intentional, but the writers seem to be setting the Kingdom up for a fall from grace, possibly aligning with the return of slime-James and his slime horde, and with him, all the spectral associations with modern, apocalypse-obssessed (zombies, nuclear armageddon) culture.

Root Beer Guy’s world is turned completely upside down when he witnesses Finn and Jake stuffing a struggling Princess Bubblegum into a trunk, and we’re with his delirium every step of the way: suddenly we’re in a place of uncertainty, where the duo that rescued Peppermint Butler from the ogre is the same that carried away PB in a truck-shaped Jake. The two are completely defamiliarized, and are as we have never seen them: alien, conniving, threatening, and with some deliciously devious smarm-talk from Jake. 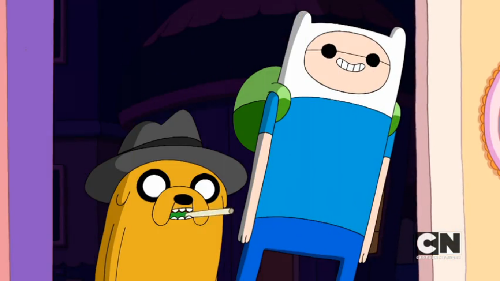 With some dedicated sleuthing, Root Beer Guy tracks Finn and Jake to Lake Butterscotch thanks to a matchbook left at the scene of the crime (more noir love <3). He phones the Banana Guards, telling them that he himself has abducted PB and that if they wee-woo their way in time they still might catch him. Once Finn and Jake are apprehended, we get the big reveal: Princess Bubblegum staged the kidnapping to test the sleuthing skills of the Banana Guards, and finds them severely lacking. It’s adorable to see the amount of trust she has in her candy children (and just outright puzzling in the case of Cinnamon Bun), but as she loses faith in the candy-topped fruit-sentries of the Candy Kingdom, she gains a new, competent Banana Guard captain in Root Beer Guy. Way to go budday. 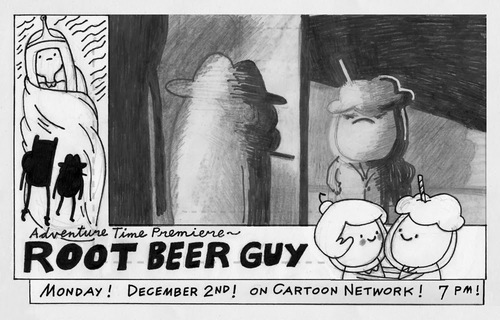