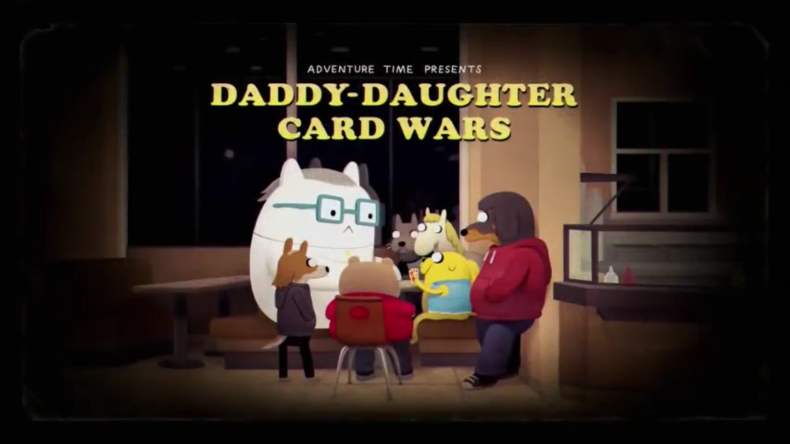 In Adventure Time‘s “Daddy-Daughter Card Wars,” Jake enters one final tournament of Card Wars to bury the regrets and baggage of his 20s, with some help from his occult-minded daughter, Charlie. It’s the eponymous time again.

There’s been an awful lot of mention of the tarot in Adventure Time over the more recent seasons; the biggest example would obviously be the “Stakes” mini-arc, in which the major trumps of the tarot represent stages of teenage psychological development. The tarot reappeared again in Thursday’s episode, “Daddy-Daughter Card Wars,” to provide a fascinating parallel with a completely different card game: Card Wars, Adventure Time‘s loving, hilarious parody of Magic: the Gathering, and similar nerdy cardboard pursuits. Where the tarot is thought to be a tool for self-contemplation, Card Wars is the complete opposite: a game that’s benign at best, but egotistical and destructively obsessive at its worse. Unsurprisingly, Jake is the latter case, and Card Wars becomes a symbol of Jake’s inability to process past failures. “Daddy-Daughter Card Wars” sees Jake trying to put his past regrets to rest, but he can’t quite get there without the help of his similarly card-obsessed daughter, Charlie. 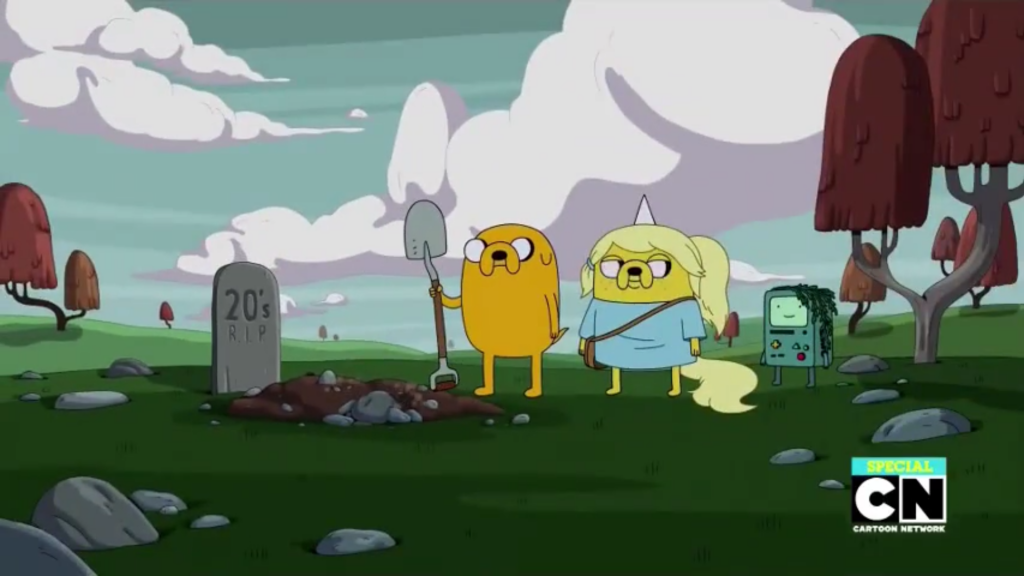 The writers’ portrayals of Jake’s children have been brilliant thus far: I loved Kim Kil Whan as the responsible, businesslike, anti-Jake, TV as the maladjusted basement nerd, and Charlie continues the trend. While sailing with her father and BMO, Charlie exudes this fascinating detachment from it all: she toys with BMO by pretending to tell fortunes with her tarot deck, and amuses herself by calling Jake ‘papa,’ treating traditional familial labels like a game of pretend. But the best moment comes when Jake begs her to be his Card Wars tournament partner, to which she responds by asking for a single one of his bones. It’s not that Jake can’t just peel back his own skin and painlessly remove a finger-bone (which he can, and does, with his shapeshift powers)–it’s Charlie’s ominous delivery that gave me chills. Meanwhile, BMO would rather jump overboard than play Card Wars with Jake.

See, Jake is not the most graceful of Card Wars players, especially when he loses. The original “Card Wars” episode was all about letting sore losers have their fun–it isn’t worth spoiling another’s tiny ego-game just to fulfill your own ego–better to let small fish have their small fry. “Daddy-Daughter Card Wars” expands on the meaning of Card Wars, and reveals that Jake used to be really, really into the game in his 20s, when he, along with his then-girlfriend Moniker, were the King and Queen of the local gameshop. Until Jake lost to his buddy Grand Prix, and flew into a rage that deformed his shapeshifting face into a goblinesque caricature. Jake recalls the flashback to Charlie with the overwhelming sound of the ocean waves in the background, that gradually swells to drown out all other noise. To lose in Card Wars, for Jake, is to be trapped at the bottom of this sea, with the overwhelming pressure to win blocking out every other sensation. 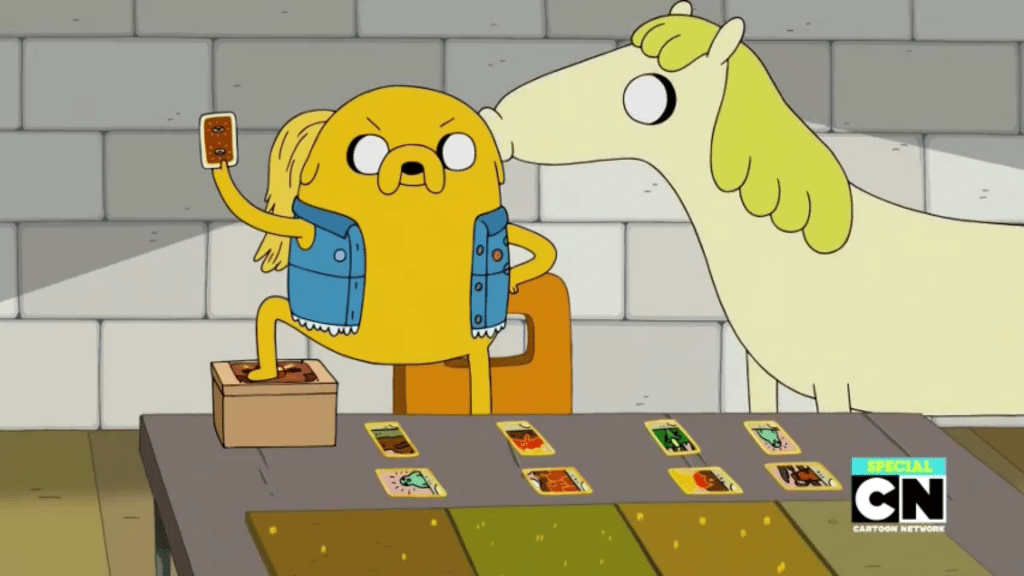 And so, Jake is spiriting Charlie off to an oil derrick in the middle of the sea, to win his last Card Wars tournament and put his 20s regrets to rest. Inside, Jake introduces her to all sorts of wacky players (I love Mr. Outrageous). They also come face-to-awkward-face with Grand Prix and Moniker, who hooked up sometime after Jake’s past defeat, adding further insult to past injury. Charlie notes Moniker’s anime-like saucer eyes, identical to Lady Rainicorn’s, and correctly surmises that she’s Jake’s ex and that he ‘definitely has a type’.

After team Dignified’s (Jake + Charlie) first victory, in which Charlie shows off her prodigious card skill (and Jake shows off his ability to be a panicky wad), Charlie abandons ship, pointing out that she’d only agreed to a single game of Card Wars. She uses her shapeshifting abilities, along with her incorporeal rainicorn abilities, to traverse the length of Ooo to ancient Egypt, where her pyramid lair lies. Jake is left despairing, and uses a shapeshift-clone of Charlie to remain in the tournament. But being in his own mind, and playing with only himself as a teammate, is the last thing that he needs at that moment. 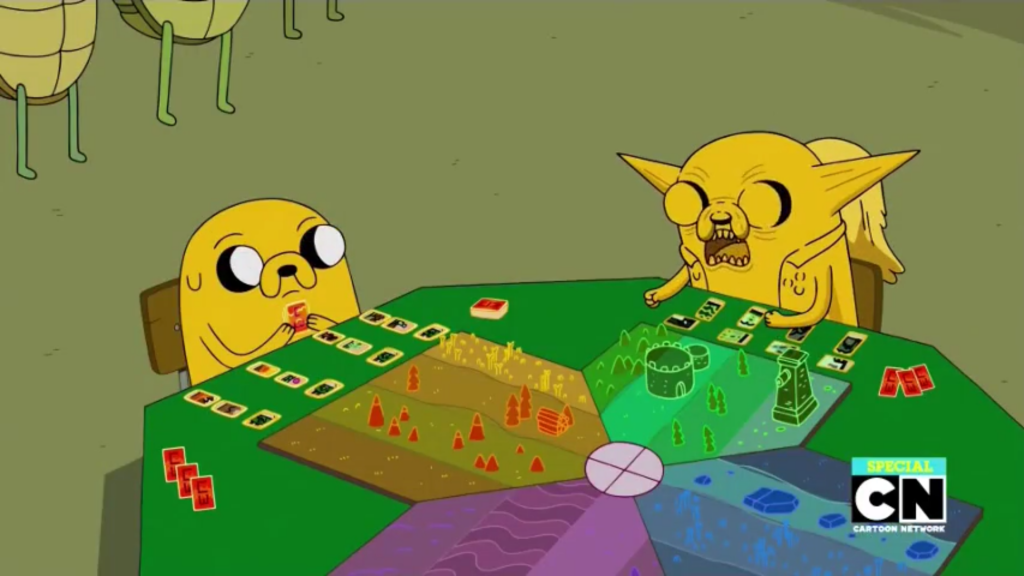 In her pyramid, Charlie performs a ‘super-boosted personal tarot reading’ using a lock of Lady’s hair and the bone from Jake’s finger, as magical catalysts. She’s using these visions to gain insight into her future, in order to improve her present state of mind, and at this point the similarities and differences between tarot and Card Wars becomes clear in “Daddy-Daughter Card Wars”. Where tarot is an ancient game arguably revolving around free association and contemplation (reacting to a drawn card, then meditating on your own reaction), Card Wars and its ilk are modern-day bastardizations. While they both involve imagination, the former uses imagination as a vehicle for self-development, while the latter is for entertainment and ego-building experiences of victory. Card Wars is the wheel of karma on which Jake is trapped, a constant game of stick-and-carrot, where the pursuit of an illusory goal (what, Card Wars dominance?) has stunted his personal growth to an alarming degree.

Over the course of her personal reading, Charlie comes face to face with visions of her future self: her pregnant 30s, lost and uncertain of her own desires; her 40s, fearfully caring for a child; her midlife crisis after her child departs; and the continuing cycles of fear and uncertainty. These decades culminate at last in a ripe, contented wisdom in her 90s, which Charlie is overjoyed to see. Thus armed with the knowledge (or at least, the impression) that all of this suffering will come to mean something in the end, Charlie is no longer afraid of suffering (compare to Jake), and unites with her 90-year-old self, becoming an enlightened child. But in the process, she also saw visions of Jake trapped in a pointless quandry (choking on too much sandwich…), which morphs into visions of her own conflicted 20s. Perhaps realizing that Jake’s fate could have easily been her own (and that he’d thrown her a literal bone), she regrets abandoning him during the tournament. And so, in “Daddy-Daughter Card Wars”, the child, empowered with knowledge of her twilight years, returns to save the father, trapped pathetically in his burgeoning adult years. 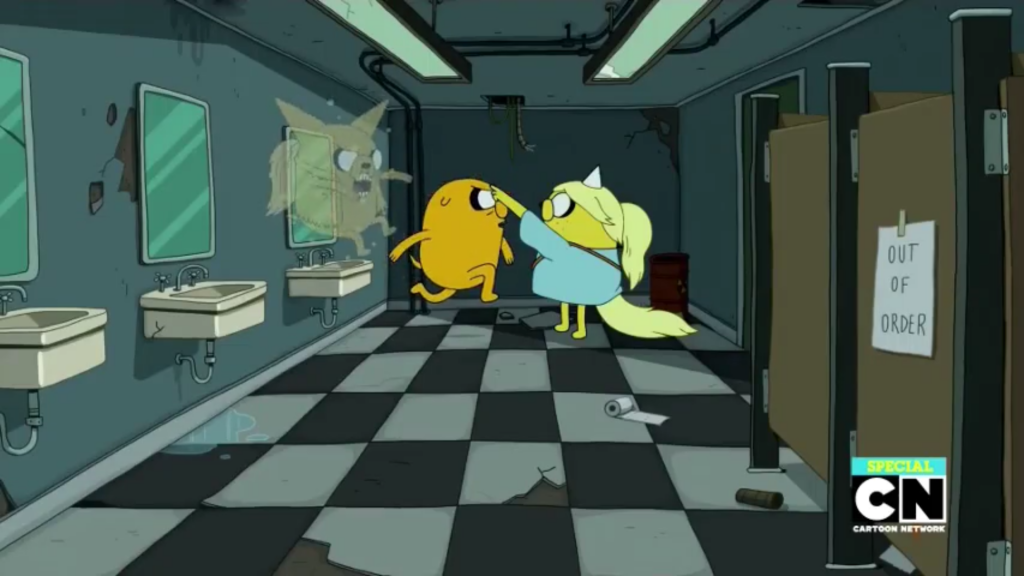 Charlie returns to find Jake in the bathroom, grappling with the goblin of his 20s regrets, which she easily banishes with blessings of “Be cool!” They both return, carefree as can be, to the Card Wars finals with Grand Prix and Moniker. Which they eventually lose, but this time, Jake has the grace to say “good game.”

“Daddy-Daughter Card Wars” continues the series’ thoughtful explorations of early-to-mid adulthood, having moved firmly out of childhood after Finn’s in-show adolescence. The idea that Adventure Time is continuing to age and evolve along with its audience gives every indication that it’ll remain unpredictable, and poignantly relevant. I’m just a bit sad to see Card Wars go…