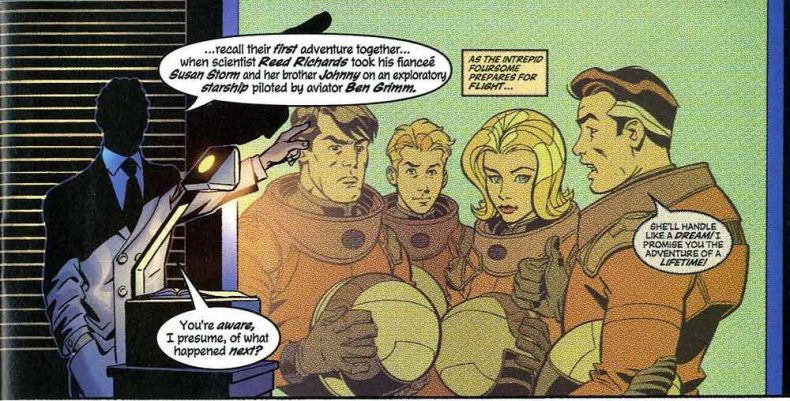 The 2015 Fantastic Four movie is…not doing great. Yeah, let’s go with that. But that doesn’t mean that people should give up on Marvel’s First Family. In that spirit, Funny Books is holding an emergency review of the best entry point for new FF readers, Fantastic Four #489, the beginning of Mark Waid’s legendary run on the Fantastic Four.

Here’s the Fantastic Four in a nutshell. Four explorers are exposed to cosmic radiation and given fantastic powers that they use for the betterment of mankind. Easy. They were the first Marvel property, ever. Marvel Comics like to reposition its origin to the 1940’s with Captain America, but all true comic fans know that the Marvel Age didn’t start until 1961, when Stan Lee’s wife told him “F#$k it, if you’re ganna quit comics, might as well quit in style” (I’m paraphrasing, but that’s mostly what she said). Thus the Fantastic Four, a team that didn’t want their powers and kinda hated one another. The title would go on to introduce such Marvel mainstays as: Namor the Sub-Mariner, The Inhumans, Doctor Doom, Galactus, The Silver Surfer, and The Black Panther.

Now know why the Fantastic Four are important, but why are they great?

Well, look no further than Mark Waid’s Fantastic Four #489, the start of arguably one of the greatest runs on the FF (up there with Lee/Kirby and John Byrne).

The premise of the story is that a Public Relations firms has just been hired by the Fantastic Four, and sends one of their own to research the team. Right away, Waid explains the origin story and highlights the key characteristics of the Fantastic Four: 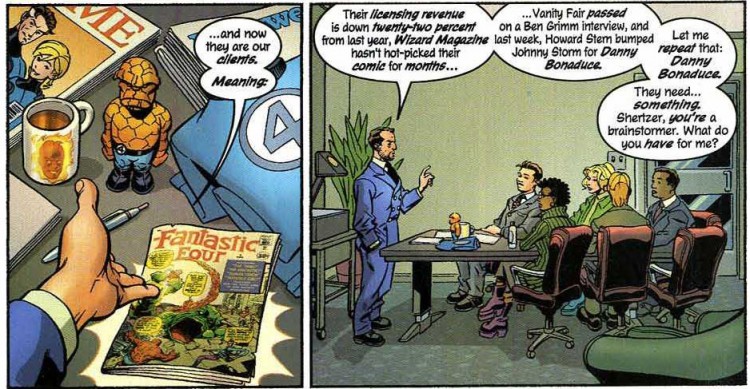 He also highlights another characteristic the team has, they’re not that popular. Even in 2002, it was evident that the FF were just shy of true stardom.

Waid then introduces us to the team proper, and or course, they are bickering about nothing. We get a snapshot of the team’s interpersonal dynamics: 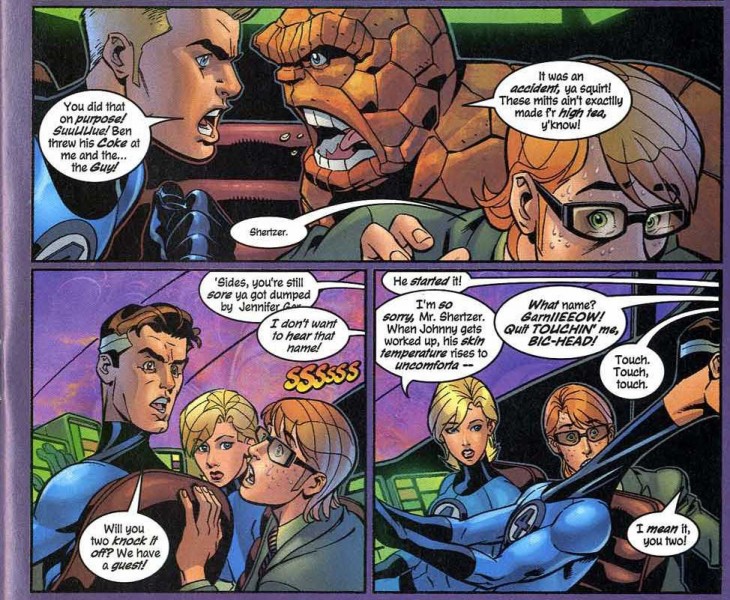 And of course, the Fantastic Four are conducting their meeting with their P.R. representative while visiting another dimension, which is a regular Tuesday for them! It’s also a chance for Waid to show of the Fantastic Fours fantastic powers. 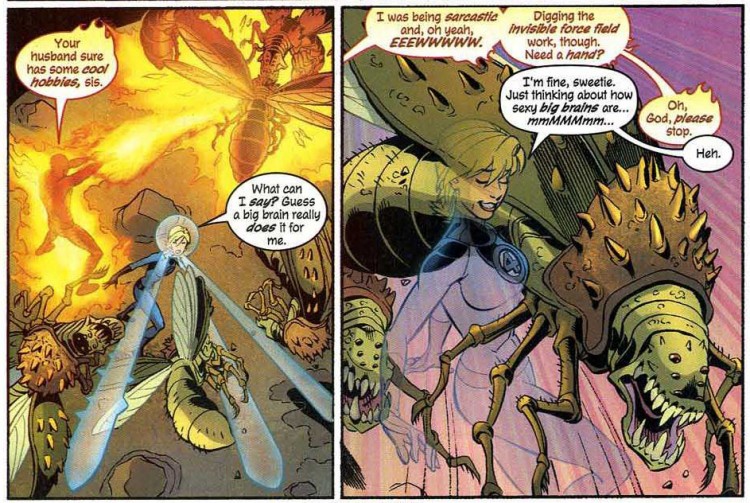 As the story goes on, it turns out the P.R. rep was hired by Mr. Fantastic, not the rest of the family. They don’t quite know why Reed would hire a firm to help their image, and the idea comes up that it may have been to booster his own ego after not being invited to a big-wig science conference. But the Fantastic Four are quick to defend Reed’s actions, even if they had selfish motivations. 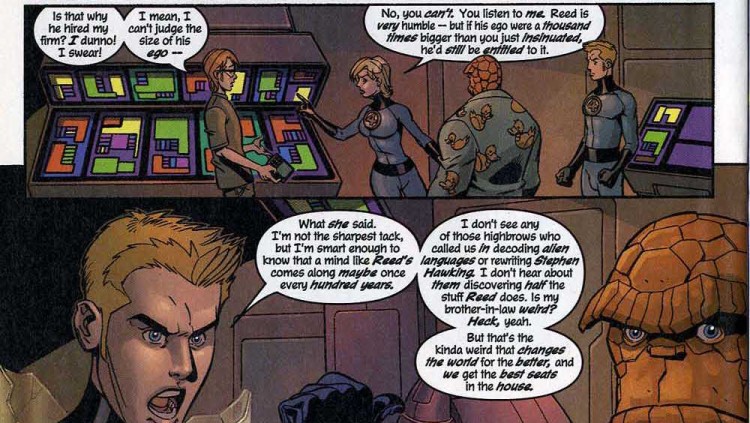 This presents another two important factors in the Fantastic Four:

This revelation presents the P.R. rep with a quandary. Why do the Fantastic Four exist? Outside of Reed Richards, the rest of the members aren’t scientist. They have no intrinsic need to explore the unknown. So why do it? 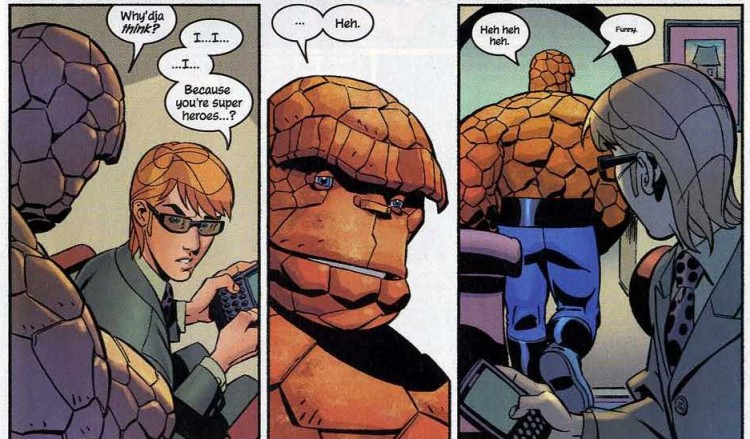 The P.R. rep spends more time with the team, and we’re presented with yet another important FF fact: 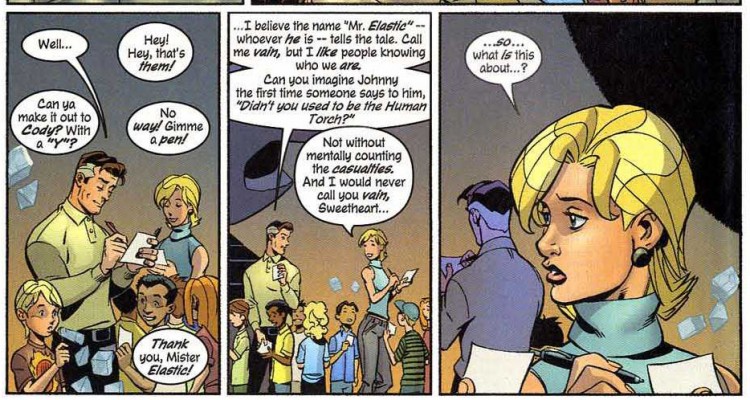 At the end of the issue, the P.R. rep goes back to his firm and tells them the secret to making the Fantastic Four great: 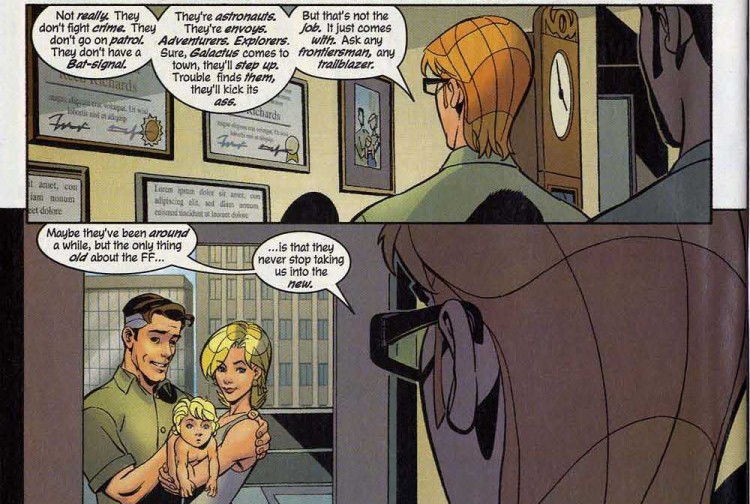 Very simply, the Fantastic Four are not superheroes. They have superpowers, and fight supervillains, but they aren’t Batman. They’re a family of explorers. Their greatest asset is their family dynamic. They fight each other, they break up, but they always come back together because that’s what families do.

But the question still remains, why did Mr. Fantastic hire a P.R. firm in the first place? 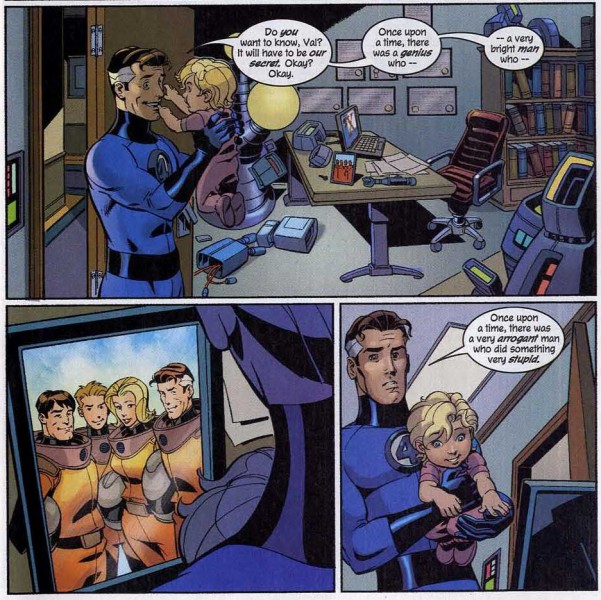 Because Mr. Fantastic loves his family, and he believes for a fact that their superpowers are entirely his fault. You see, way back in Fantastic Four #1, it was Reed’s underestimation of his shielding that exposed his friends to cosmic radiation, forever transforming them into something new. Knowing the illogical bigotry in the world, Reed immediately made them what he already considered them: Fantastic. He created a team of costumed adventurers that the whole world could admire. 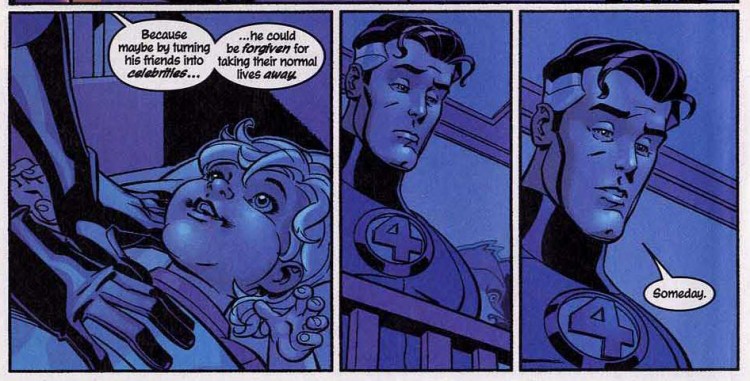 Like every scene in this issue, this scene could be presented as a perfect snapshot of the Fantastic Four franchise. From the outside, a character like Mr. Fantastic is just a generic scientist who bosses his teammates around. But when you look closer, you see an actual character racked with guilt over hurting the people he loved the most. That’s why the Fantastic Four is great. Because while an outside perspective could interpret the team as very vanilla, a close look will tell you that they are anything but. I mean, just look at this: 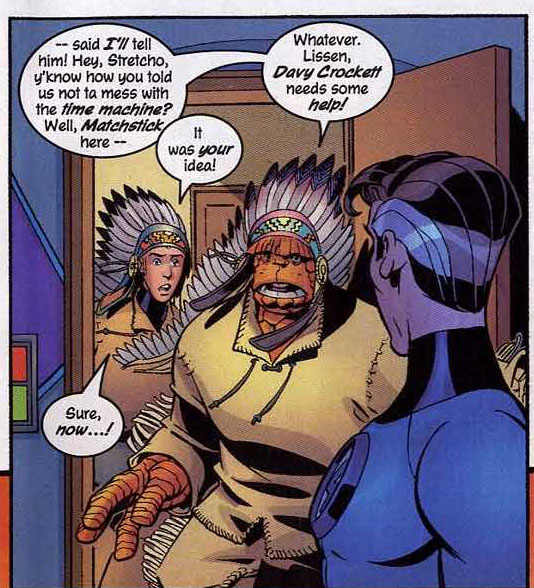 And tell me the Fantastic Four don’t deserve the benefit of the doubt.

Co-Host of the Nameless Geeks (Be Sure to follow on Itunes), Lover of Comics Books, Wrestling, and You.
You might also like
Fantastic FourFunny BooksMarvel ComicsDCEUBooks

by Jessica Lee on November 9, 2015
For nearly half a century, the Baxter Building has been the iconic home and headquarters of the Fantastic Four. Earlier this year, that all changed when it went on the market, purchased by none other than Spider-Man.