The Dead Rider: Crown Of Souls Review – The Unforgiven Meets The Undead 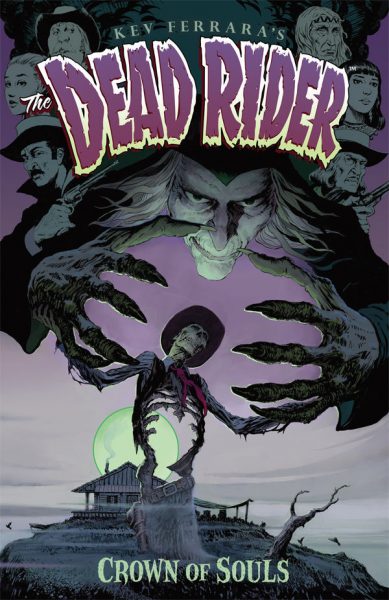 The Dead Rider bides his time, hiding from the cavalry that has dogged his steps for ages. Can he use their determination, the blinding obsession and avarice of General Cavanaugh, to free himself from his real enemy, The Bog Witch, and stop her from completing The Crown Of Souls

So, The Dead Rider. It’s a horror comic, right?

I certainly understand why you would think that, what with the proliferation of bones on the cover, the abundance of skulls, and a witch for a villain.

We must remember, however, that for something to be considered “horror” in my opinion, it must either:

By this definition, I would call The Dead Rider a supernatural Western, to be clear.

That makes sense. But did you still like it?

I loved it! In a way, The Dead Rider is even preferable to an out and out horror, for me (heresy, I know), as I love the dark and supernatural, but often have to wade through rivers and oceans of gore to get to the good stuff: the mystery, the magic, the monsters.

I’m a peculiar horror fan, in that I don’t revel in the suffering of others (too often), but am willing to subject my eyes to all manner of atrocities to find the gems of imagination, the seeds of the soul.

“The Seeds Of The Soul”… I like that. So who worked on it?

The Dead Rider: Crown Of Souls is the creation of one lone man, Kev Ferrara, who has previously worked on a few issues of the new Creepy series, and an issue of Aliens Vs. Predator: Deadspace.

It is obvious that The Dead Rider is his labor of love, as he executes his auteur-like vision across multiple disciplines.

And rather than being a sub-par writer, or lackluster artist – Ferrara shines in both regards, which is no easy feat! The man clearly has dedication. I, for one, will most definitely be hunting down his back issues.

The characters are the main thing that sets this mini-series apart, giving depth and humanity to what could have been stereotypes or as vehicles for violence.

The Dead Rider, who once was a man called Jacob Bierce, is a lot like a more conflicted Saint Of Killers, from the Preacher comic. He’s invincible, but he can still feel pain.

I was worried, at first, that TDR was going to be too powerful, a Superman type of situation with no tension or gravitas, as he goes from one Crow-style shootout to the next.

The Dead Rider doesn’t want to kill, however. He’s actually a good man, trapped in a rotting, invincible husk, which can be manipulated by The Bog Witch, who created him.

The Bog Witch is the other standout character. Truly, truly wicked. And while I’m against the proliferation of the wicked witch stereotype, they do exist. There’s some bad, bad women out there, and The Bog Witch is the worst of them all. She’s bordering on Queen Metalia levels of supervillain-hood.

The Shaman is a good and loyal friend, and General Cavanaugh is an uptight, neurotic obsessive man, that is corrupt to the core.

What else is good about it?

The details, man! The presentation. This book is worth reading for the layout alone. The bone and bullet borders around every page are sweet beyond belief! And the b&w introduction pages, sparse and monochromatic, would be worth the price of admission.

There’s also little nuances like different colors of speech bubbles for different characters, which make it easier to follow who’s saying what. And then there’s little details, in the story itself, like The Dead Rider’s signature skull-and-bone bullets, that are just badass.

Dark Horse describe The Dead Rider: Crown Of Souls as “gorgeous artwork, in the tradition of Wrightson or Frazetta”, so obviously anyone who is into old Swamp Thing, Creepy and EC Comics will dig this. Also, any fans of Westerns or the supernatural, or both at the same time, will find something to sink their fangs into.

But mostly, it will appeal to people who like characters with surprising depth; awesome action, which never becomes over the top; eye-popping artwork; and works of extreme dedication. Ferrara deserves to be applauded for this labor of love, for bringing this tale of immortality, vengeance, and redemption to fruition.

The Dead Rider will appeal to people who like characters with surprising depth; awesome action, which never becomes over the top; eye-popping artwork; and works of extreme dedication. Ferrara deserves to be applauded for this labor of love, for bringing this tale of immortality, vengeance, and redemption to fruition.

Fans of Westerns or the supernatural, or both at the same time, will find something to sink their fangs into.

We’re Getting an Avatar Comic Book Series from Dark Horse

by Jeff Williams on October 12, 2015
We’ve got a long wait ahead of us before Avatar 2 arrives, but luckily, James Cameron and Dark Horse are partnering to create some new stories to fill the gap.

by Ryan Matsunaga on September 3, 2015
September is here, which means summer is finally drawing to a close. Don’t be sad about the lack of sun though, there are more than a few reasons to stay inside as those temperatures begin to drop.
8.7

The Fox #1 Review – Another Superhero Hit for Archie