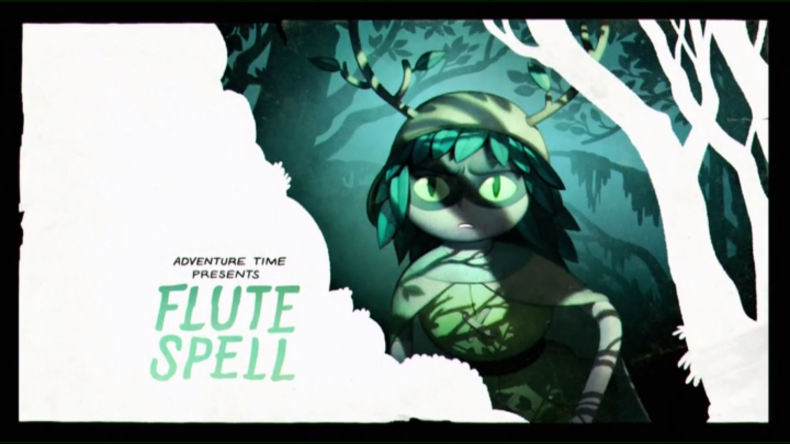 “Flute Spell” opens with a hilariously familiar scene to even the most casual of gamers: Jake’s caught in an unending stream of turn-based RPG combat with nary a save point in sight. Level grinding is one of the most mysteriously stupid tropes in gaming history; what force compels a player to pace back and forth across a tiny plot of random encounter-rich land for obscene amounts of time, for a miniscule gain in ability? Aren’t gamers supposed to be stereotypically stimulus-starved, insatiably hungry for glitz and pyrotechnics? Why do they put up with it? “Flute Spell” puts that mystery to work as a perfect-fit metaphor for the unending wasteland that is casual dating.

After Jake’s game crashes, he’s free to indulge in the real world again (spending time with Lady Rainicorn, teaching TV to eat well, spying Death in a field at night) and notices Finn hasn’t been around for two whole weeks. Shelby divulges that Finn’s been pursuing a new lady, but wants to take it slowly and carefully this time around, which is understandable: his love for Princess Bubblegum was Quixotic from the start, and his break up with Flame Princess launched the most brilliantly pathetic arc in Finn’s animated life. This is the episode where he learns to do it right, but if an abundance of love makes you reliant, and a lack of love makes you miserable, what’s the middle road? Is the answer really to fall in and out of love, smashing yourself against the rocks again and again like so much level-grinding?

Jake eventually finds Finn in the middle of the forest under the moonlight, playing his flute for Huntress Wizard. He learns that their courtship is sort-of, ostensibly, mostly platonic: Finn happened to be bathing in a river while playing his flute one day, when HW overheard and told him that his song has magical evocation properties, thanks to his grassblade-enchanted hand. His song is apparently potent enough to summon the Forest Spirit, her estranged mentor (and ex, sort of, maybe) and that’s what they’ve been up to for two weeks, to no avail. Finn’s been learning about asceticism from HW (more on that later) while HW uses Finn to find the Forest Spirit; from the outset, it’s clear that she’s primarily interested in his ability to evoke her old flame, a familiar story for anyone who’s been left dating in another’s shadow.

Their newest scheme is to craft Finn a better flute from the horn of the Thunderboar, but to shield himself from its electrical attacks, Finn takes a sip from the psychotropic waters of an enchanted spring. After it heightens/warps his perceptions (Jake becomes a bird, HW becomes a wolf), the Forest Spirit appears to Finn to impart a cryptic epiphany: predators such as wolves (such as Huntress Wizard) have eyes on the front of their heads and lack peripheral vision. Huntress Wizard, in other words, isn’t really a distractions kind of girl, which doesn’t bode well for Finn. Nonetheless, Finn goes ahead with the mission, and at Forest Spirit’s command, plunges his hallucinatory sword into his own heart. It does no physical damage, but the act of personal conviction really does render him immune to electric attacks.

They craft the new flute, but Finn’s song alone can’t summon the Forest Spirit–Jake points out that it’s not working because Finn’s flute song is for Huntress Wizard alone. Hence, when Huntress Wizard joins in on his song, the Spirit finally makes his appearance. His exchange with HW reveals that they were a thing in the past, but she’d become attracted to the mad / sad / magic lifestyles of Wizard City. If you’ll recall, all wizards in Adventure Time gain their magic by virtue of being emotionally sad, and mentally mad, in a colorful figuration of the ‘tormented artist’ trope.

When prompted by the Forest Spirit, Finn admits he’s been playing for Huntress Wizard all along, but she responds: “Hard meat don’t get eat.” In other words, despite reciprocating Finn’s feelings, and enjoying romantic company like Forest Spirit’s in the past, she can’t relinquish her independence by giving into her desires. That way lies bondage and attachment, and you can bone up on your Buddhism if you don’t believe it. She’s a predator, an exceptional being with a one-track, eyes-on-the-prize mind, and she’s attracted to Finn because he’s an “exceptional beast” too. His conviction for Huntress Wizard mirrors her own conviction for her personal freedom, and paradoxically, that’s why they can’t be together. If that’s confusing, it’s because it is. But that’s the only logical thing for Finn to learn in his maturer, post-break up-form, or else he’ll fall in love again, get attached, then sink into an emotional abyss when his object of attachment (girlfriend) is gone. An ounce of Huntress Wizard’s asceticism might’ve spared Finn the emotional apocalypse of Flame Princess’ break up.

“Attractive forces come and go,” so sayeth the Forest Spirit, who seems aligned with harmony and unified willpowers, judging by his opposition to Wizard City sad/mad/magic, and his affinity with the sounds created by Finn’s grassblade arm. Finn earned that grassblade by accepting its curse, being in harmony with his mishaps, and so growing stronger by them, and that’s what Forest Spirit is all about–that’s why it took Finn and Huntress Wizard’s harmonized flute spell to summon him. It looks like Huntress Wizard, on the other hand, was caught between her romance with Forest Spirit and her desire to stay tough and aloof, thus spurring their own falling out. The confusion between the two extremes of romance and self-devotion is expressed by the recurring ambiguity of their relationship (mentor? lover? cult leader to her naive maid?). Thus, despite being attracted to one another, Finn and Huntress Wizard go their separate ways. 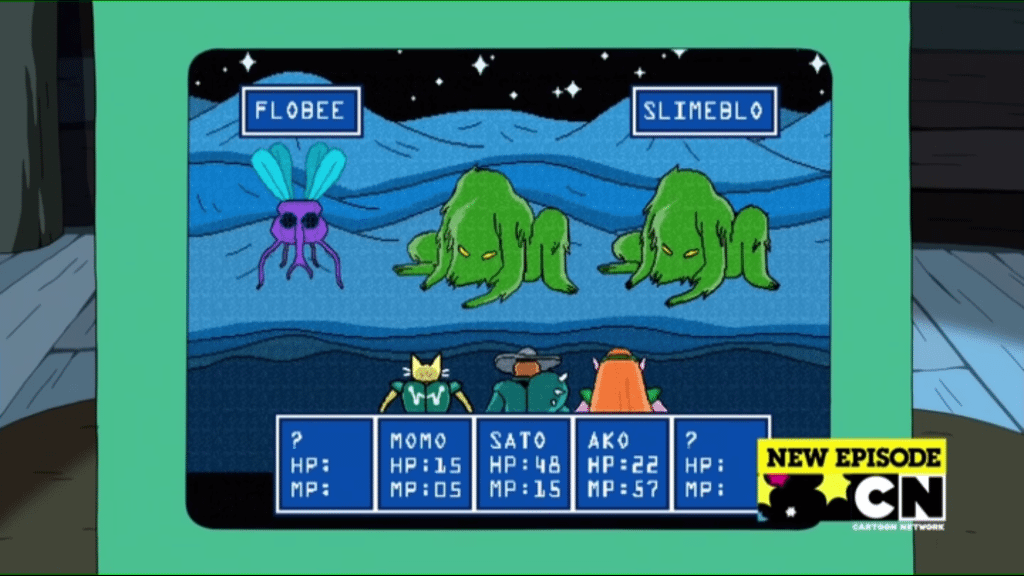 At the close of “Flute Spell,” Finn and Jake tag-team the game from the beginning and complete it together. Level-grinding, like the dating game, is a cyclical process, pointless on the most basic level, and unbearably grief-inducing–but necessary, if you want to win. Like Finn says, it’s a bad and stupid game, but it’s just what we need if we’re to learn.