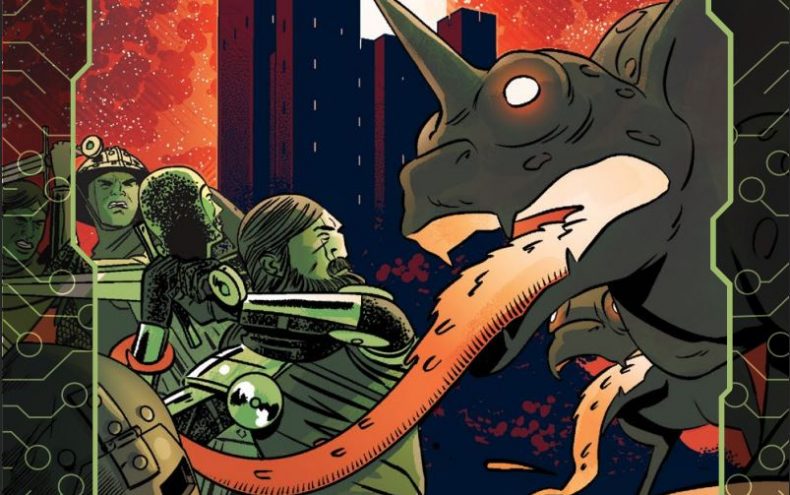 Dark Ages is billed as Starship Troopers meets Kingdom of Heaven (have they seen Kingdom of Heaven?) on Dark Horse’s page. The Cthulhu references seem inevitable though. Space demons are raining from the sky to terrorize a troop of mercenaries, so, you know, it seems apt. There’s certainly less mind destroying existential horror at the new found vastness of the universe and more square-jawed sword swinging though, so maybe the reference only goes skin deep. Unfortunately the story doesn’t go much deeper than the skin.

Isn’t this grab-bag approach to storytelling getting a little old?

It’s definitely a method that wears its tropes on its patchwork sleeves, but putting incongruous elements together and hoping for alchemy is definitely capable of bearing fruit. I don’t want you to think my negative feelings are directed at the format as a whole.

But, aliens! Androids! Swords! Shouldn’t this be awesome?

I was hoping for the previously mentioned alchemy, but it’s dragged down by a lot of clumsy writing and limiting layout work.

Dark Ages portrays a group of largely godless mercenaries who have only the vocabulary of Christianity to converse and comprehend the world with quite well. They might not believe in God, but they don’t really have the technological or scientific knowledge to use anything but theological terms to deal with what may as well be demons showing up. They still pray to God when all else has abandoned them. They still speak of cursed and blessed things because that’s simply the vocabulary available to them. They’re cynics, not modern atheists, and that feels quite natural and well executed.

What doesn’t work is where the genres meet. Everything compounds on itself to bring the edges into sharp relief instead of bringing them together. If this were a fantasy the wizard would certainly be spouting magic-babble, but here we have an android spouting techno-babble, which sounds all the more ridiculous for it’s incongruousness and its insistence on commenting on how the primitive humans don’t have the proper frame of reference to understand it. If this were a Futurama episode it would be hilarious, but it isn’t, and it’s not. It just serves to highlight how little of the techno-babble makes any sense at all.

If the science were more grounded, or presented with less self-reflexive double talk it would be much less distracting.

There’s also some heavy handed Jesus allegory that doesn’t have the room to justify itself and we’re left with the origin story of a character we have little reason to care about except that we’ve been told to.

Okay, so how was the art?

On the surface I really like the simplicity of the colors and the bold lines. It almost feels like a scaled up newspaper comic strip. That simple, comfortable feeling helps to crank the horror and weirdness up to eleven. The aliens are all the more horrifying for their lack of detail. Even though only a few types are featured, some only in silhouette, one gets the impression that there could be infinite varieties just over the horizon.

While the art style is strong, the layout work tends towards claustrophobic. There are some moments where this works very well, but it made it difficult for me to judge the scale of the actions and reduced every character in the background to a faceless blur. Especially during the battle scenes it feels like watching a movie with some really exciting moments, but through a camera with no idea when to cut to a wide shot or a close up. Which isn’t to say there wasn’t some premium violence on hand, but it feels very contained within the staid frames of the page.

There are some high points here, and I like the art style, but the story is pretty boring and heavy handed. If you want a quick and bloody read it’s fine, but there’s probably better options out there.

Flip through it on the rack and move on