Difficulty Spike: Can I Beat X-Kaliber 2097 on Its Hardest Setting?

Welcome to the debut edition of Difficulty Spike, a series where I attempt to play through a game at its absolute hardest difficulty setting to see how long I can survive.

Before we get started, I should establish the general criteria I used to judge my experience:

1. How the game plays on default settings, before ratcheting up the difficulty.

2. How much the game changes as a direct result of the increase in difficulty.

3. Did I need to use cheats to make progress? *To be completely fair, any use of a cheat device or other rulebreaking methods to make progress ends my experience with the game’s hard mode.*

4. Was I able to beat the game? If not, how far did I make it before giving up or using cheats?

With that out of the way, let’s dive in. 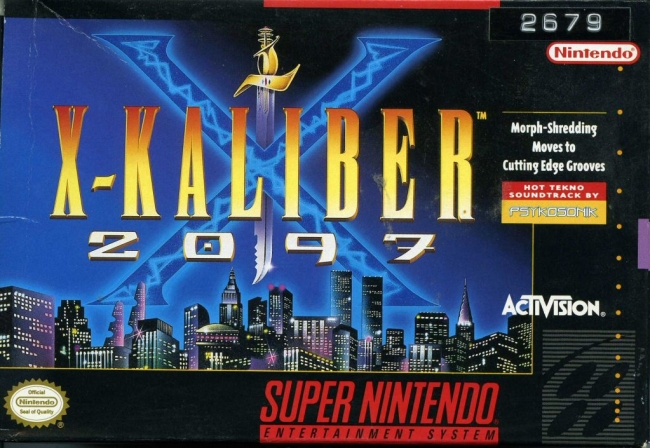 Highlights: Pretty much impossible, enemy attack patterns erratic, 5 or 6 hits kills you, no recovery time in between hits, timer kills you if the enemies don’t.

So, X-Kaliber 2097. Ever heard of it? Neither had I until my friend introduced me to it a few days ago.

It’s a humble Super Nintendo game. The character names are horribly cheesy, like they were plucked directly out of Escape from L.A. or something. You control a generic hero with a sword named “Slash”. Haha. That was punny.

You’re after a man named “Raptor” (seriously, where the hell did they get these names?) who has taken your special forces partner “Alix” hostage. The entire driving force behind the story of the game seems to be that Raptor is jealous of Slash’s sword “X-Kaliber” (seeing a theme here?) and sees Slash and Alix as the only threats to his control over Neo New York (literally New New York) because he can’t buy them off, like the rest of the “agents”.

Apparently, X-Kaliber is as sharp as the sword in Kung-Fu Panda that can cut you just by looking at it. That wasn’t something I experienced in the game, but that’s besides the point. The game is semi-infamous on the internet for its erratic difficulty spikes and awkward combat so, as the title of this column implies, I just had to try it. 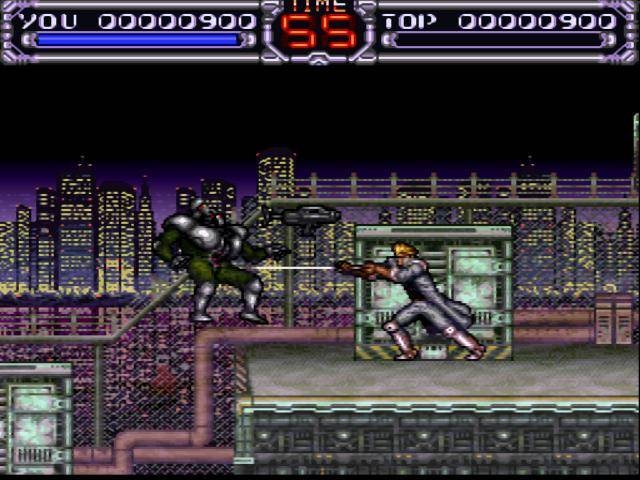 The game’s default setting actually managed to be fairly challenging. You’re given roughly one minute to make it to the next part of the stage or the timer kills you. That’s not unreasonable, as there are plenty of arcade-style beat ’em ups that use this format. However, that timer becomes your worst enemy when you begin to figure out the combat system. It’s pretty standard. The B button jumps, the Y and A buttons are standard and “strong” attack respectively while the X button blocks and the shoulder buttons unleash your average hack-n-slash energy wave projectile.

What I noted, pretty much instantly, was that using the block button on every enemy is absolutely essential, and there is no after-hit invinciblity, meaning you can die pretty much instantly in one cruel sequence if you don’t react fast enough. The enemies also don’t falter when you hit them. The flying baddies I encountered in the first stage are hard to hit but die after one blow. The soldiers, however, are less forgiving. These guys have balls of steel and will just continue straight through their walk pattern back and forth, even if you’re standing close and repeatedly slashing them. So, that’s the first instance of this sword’s “legendary sharpness” failing to make an appearance. If you can hit the button fast enough, most of the time they’ll die before doing anything.

However, if you’re in the vicinity of their walking pattern, they’ll bump into you, even while you’re cutting them, causing damage, so timing your cuts and your walking is important. Take too long and they open fire. The projectiles, like the strikes, can be blocked (though blocking in this game knocks your character back a few paces) or, more dangerously, you can “attack” your way through them.

Progress far enough into the stage, and you’ll come across a sub-boss and then an end-level boss. Pretty basic gameplay stuff so far. 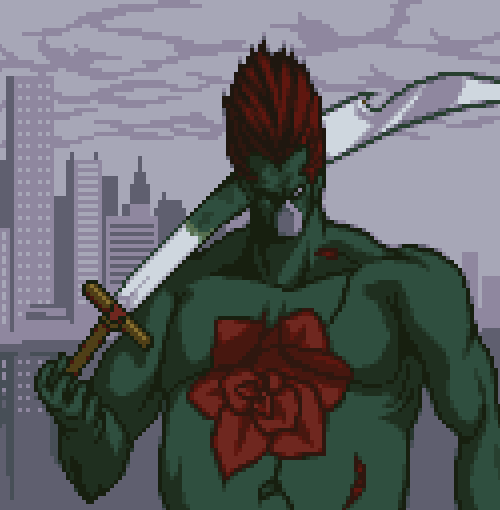 We arrive at the experimental part of the experience: cranking up the difficulty. As I mentioned before, the game is pretty challenging outright, even on the default settings. On difficulty level 7 (seven levels of Hell, maybe?) it gets absolutely nuts.

Those steely-balled soldiers I mentioned before? Let them bump into you four or five times while you’re trying to kill them and you die. Run into one of their streams of gunfire without blocking quickly enough, you die. On the hardest setting, you’re basically a walking slab of meat with a sword.

The sub-boss didn’t prove to be that much harder after the spike, surprisingly. Once I figured out his pattern, getting past him wasn’t too bad. It was reaching the infamous Stage One end boss that did me in.

The end boss of the first stage is a big green bloke with red hair and an ugly rose tattoo on his chest. He more or less looks like Blanka from Street Fighter after a bender. And, in keeping with this game’s theme of completely uninspired monikers, his name is “Tattoo”. Terribly creative.

Tattoo is the antichrist of beat ’em up games. His sword is much bigger and stronger than “X-Kaliber”, he automatically blocks pretty much every attack you throw at him and if he can’t beat you by spamming his ridiculously long downward sword slashes, he just shoots his…tattoo plant thingy…out of his chest at you. He’s well known among players who have sat down with this game as being absurdly overpowered for a first-stage boss and, needless to say, I didn’t get past him. 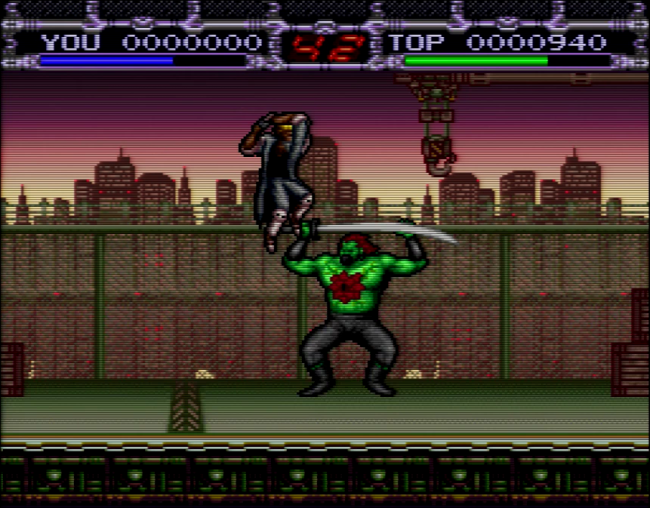 Just for kicks, I fired up the Game Genie, effectively ending my challenge, and decided to find out what it would take to beat Tattoo. I found that, no matter what I did, my projectile attack was 100% useless. Tattoo would either block or time his jump to perfectly avoid it. I was able to slash wildly and occasionally stab him to deal damage, but being close enough to him him necessitated taking far more hits than the game would normally allow (I used a health code), or blocking for dear life (a fruitless task since blocking knocks you away from the enemy). After absorbing a hilarious number of hits, I “beat” Tattoo…only after using an additional cheat to freeze the timer, which would have killed me regardless of my invincibility because the whole thing took so damn long.

All in all, this was a fun, if not very successful, venture. I made it to the end of the first stage, and didn’t beat it, before having to end my challenge and use cheats to get ahead. 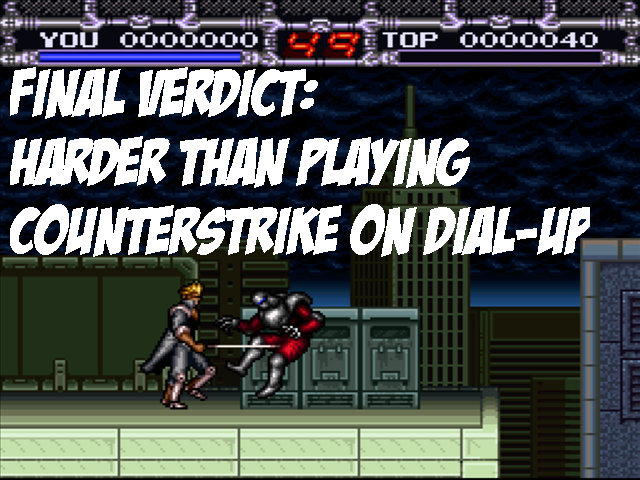