Fanfiction, Bad Fiction, and Hipster-Hate in Adventure Time’s “The Prince Who Wanted Everything”

On the last episode of Adventure Time, “The Prince Who Wanted Everything,” Lumpy Space Princess kidnaps the Ice King and forces him to read her own genderbent “Fionna and Cake” fanfic in a darkly hilarious attempt to bring her fantasy man (her-, uh, himself) to life through the power of wishful thinking. As Ice King is the only person in Ooo sadder than LSP and the energy from his desperation could power a small metropolitan moon, I can see where she was going with that. It’s the eponymous time again! 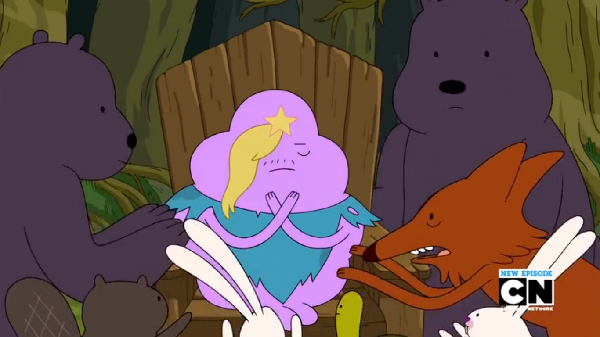 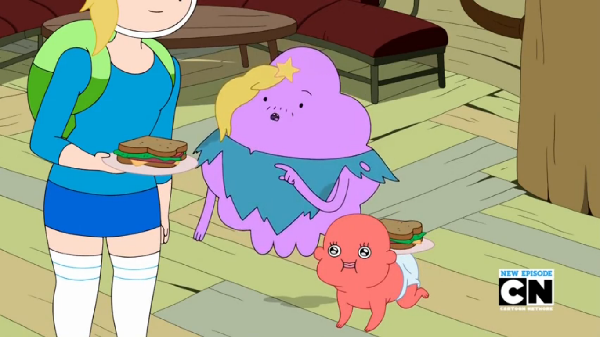 “Wait, where are your baby-tables?” 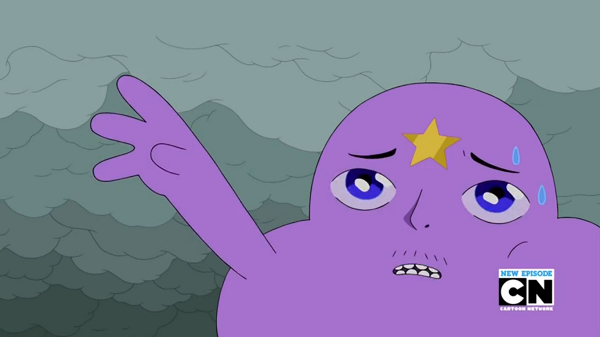 “Flee, noble Fionna. For it is my stupid parents, and they’re fatter than ever.”

Adventure Time struck magical meta-storytelling gold when it created the Fionna and Cake genderbent episodes, for more reasons than I can squeeze into an introductory paragraph, but I’ll try to condense it for you. For one thing, it wouldn’ve worked if the genderbent characters weren’t charming, likable characters in their own right, but they are–Fionna is the most un-forced iteration of the klutzy every-girl I’ve seen; the internet’s collective preteen population went into false labor with the creation of Marshall Lee, as voiced by Donald Glover; and Lumpy Space Prince is the most hilariously vain character since Ron Burgundy. Aside from their innate charm, there’s the voyeuristic glee of sampling another’s fantasies: these episodes demand that you watch the fanfic authors pleasure themselves, literarily, in the most emotionally confusing of ways: Ice King genderbent Finn into Fionna in order to fictonally date her, in order to enact his desire to bro it up, but on a plane that bros speak of only in candlelit enclaves. And aside from that aside, the show is acting as its own fanfiction which would make fanfictions of Fionna and Cake just completely I don’t even . . . But anyway, Fionna and Cake episodes are quite popular, and “The Prince Who Wanted Everything” admirably furthered the show’s exploration of the most embarrassing of artistic mediums.

This season’s anticipated “What If” episode starts off fittingly: Ice King is kidnapped by a Princess (the lumpy purple one with sparse fur) and forced to enact her desires. He wakes groggily to find himself tied securely in the outdoor hovel that is LSP’s adolescent, moving-out, not-quite-sure-what-independence-means-or-entails phase, and she appears desperately from behind the campfire with her hand-bound addition to the Fionna and Cake universe. How LSP knows about Ice King’s sad, sick fantasy (no judgment to fanfic-ers, really! it’s just, y’know, Ice King) is completely irrelevant and warrants a punch in the face if you ask me–continuity can go to hell in the face of hilarity. 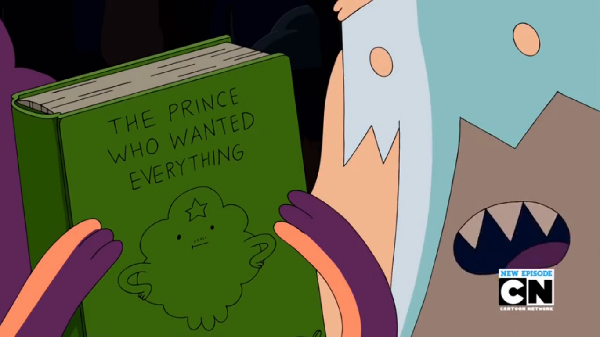 I’d like to point out that funny as the episode is, there’s also a sadness in watching Ooo’s two most undateables convene in some ill-explained attempt to actualize their fantasies, especially when you remember how LSP accidentally banished her own lover to another dimension, but let’s just put that aside. LSP has approached the Ice King because he is, after all, the founder of Fionna and Cake, and by LSP-logic, that makes him the father of her own masturbatory creation as well, and able to endow it with life just by reading it. LSP’s tale revolves around her own genderbent character, a rebellious young Lumpy Space Prince (voiced by Peter Serafinowicz, of Shaun of the Dead and Star Wars: Phantom Menace) with ill-conceived notions of philanthropy, an overbearing sense of self-regality, and a hatred of his parents and their commandeering ways. He wants very much to be a Prince of the people, hurling gold-encrusted slices of toast from his castle onto their soft lumpy heads, but wouldn’t you know it–Lumpy Space Parents want him to be a grotesque abomination like them, because parents just don’t understand and such.

After a juvenile shouting match more uncomfortable and inane than anything you’ve ever witnessed visiting a friend’s house in middle school, LSPrince is on the run, and leaps from a cloud cliff and through the portal between that realm and Aaa (yes, there’s a name for Fionna’s Ooo). Once he arrives, he quickly installs himself as the prince-in-exile of that land, willing to lend purpose to their pathetic, native lives by allowing them to indulge in himself. First three points of order: LSPrince needs some freaky clothes (“cool freaky, not monster freaky”), something mindblowing to read, and a servantry culled from the surrounding populations that surely won’t mind. 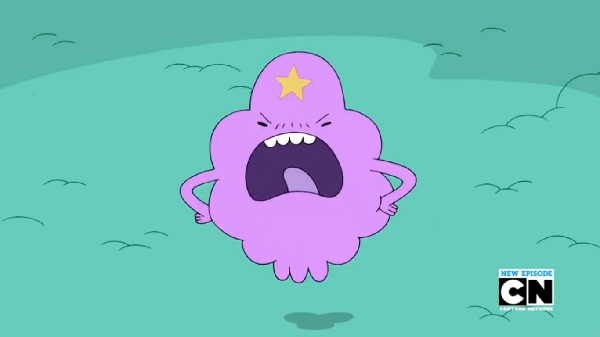 His impressionable woodland friends scrounge up some mind-blowing text on German psychology, an entourage of slaves including Marshall Lee, Flame Prince, and Prince Bubblegum, and the outfit of Char Aznable, the original mysterious, sexy, man-slice antagonist from Mobile Suit Gundam, and most likely the subject of his own pantheon of fanfics. The groans of the oppressed Aaaians guide Fionna and Cake to the scene, who break the prisoners’ chains and arouse the singular attentions of LSPrince, who becomes quickly attracted to her ‘rustic’ charm and casual demeanor. From the seven or so words that Fionna utters in the scene, he gathers that she’s pierced through his external appearance to appreciate his inside lumps, such catch!

On one hand, this and the following scenes are a sendup of everything feminists have been railing against in the history of American media–Fionna is accessory to LSPrince’s growth and whims and her acts are muted next to LSPrince’s centrality, and is objectafoozled by him. It’s interesting because Ice King was coerced into reading the story in this particular way, with LSPrince as a British stud and Fionna as a fawning damsel, and LSP’s enforced reading looks like that archetypal patriarch hissing into the ear of the archetypal storyteller “no, that isn’t how I sound at all.” And if LSP is the narrative’s meddler, she’s also this arch-patriarch, and he’s every bit as vain and self-centered as she. Or it could be making fun of hipsters, I’m not sure–‘rustic, quaint charm,’ upper-middle class privilege, malappropriation . . . 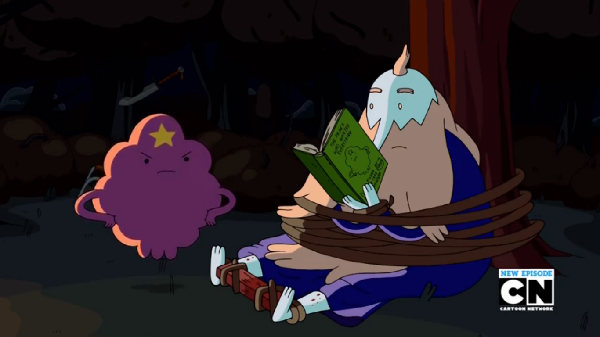 LSPrincce follows Fionna and Cake back to the Treehouse to hang, and is inspired by Fionna’s gracelessness and naturalness of movement, prompting him to waltz with her under the twilight sky where their love-locked smiles are literally engraved in the stars, anime-style. Fionna is struck by his glamorous aura, and he graciously breaks his own hold over her, explaining that he can only wed according to his perfect stature, a technicality soon dissolved by the prospect of sandwiches. Inside the Treehouse, LSPrince is continuously wowed, first by the fact that F&C don’t dine on the backs of baby tables, and second, that their foodstuffs aren’t fondue’d with gold. This somehow gives him the idea that he’s paid too much of his attention on his subjects, with not nearly enough left over for himself. He breaks into a Disney-esque song about living a simple life more attuned to one’s natural inclinations as opposed to society’s impositions. Its affluent and secure impositions.

After his musical epiphany concludes, Lumpy Space Parents appear through the frog-portal and fill the sky in some weird reversal of The Lion King‘s Mufasa scene. They’ve come demanding that LSPrince take his rightful place at their lumpy monstrous side, and Fionna urges him to face them head-on. However, can-do attitudes and pithy rhymes only take them so far before they’re struck down by LSParents’ adult grossness bolts. This Prince requires no less than three character transformations inspired by a female character before he can prevail: he realizes the truth in Fionna’s easygoing demeanor, and the power of uh, being casually rebellious rather than childishly rebellious. “The only way to defeat parental disapproval is to not care about anything!” LSPrince beats back his Cronenberg family with diva proclamations of ‘I don’t care,’ and after they’re vanquished, allows Fionna and Cake to treat him to victory dinner. 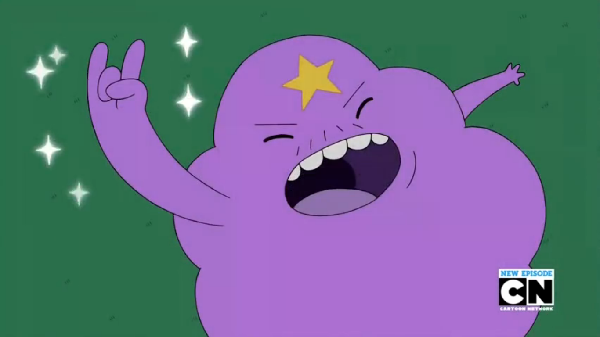 But that isn’t quite the finale LSP has in mind–she tells Ice King to keep reading, and through the narration, bring to life her dream man that is actually the manned-out version of herself. The countdown to the bridge between worlds begins, there’s a rustle in the bushes, and LSP begins to sweat. The countdown ends and a rabid possum tramps out of the underbrush, and up the pantleg of an Ice King who doth protest too little, and that’s a wrap.

While the Fionna and Cake episodes don’t click for me all the time (“Bad Little Boy” still rubs me the wrong way), the concept is pure comedic genius. It exposes everything hilarious, narcissistic, but mostly just plain fun about fanfictions as a cultural object, and catches the audience with their pants down and pens out. To anticipate what fans would want out of a genderbent, idealized version ofAdventure Time is to reach into a very personal space usually protected by a deviantart username, which makes watching these fantasies played out on the show itself sweetly surreal. Also, I just noticed that might’ve made fanfics sound unsavory–they’re not. They’re hilarious and interesting, and valid. But also very hilarious. 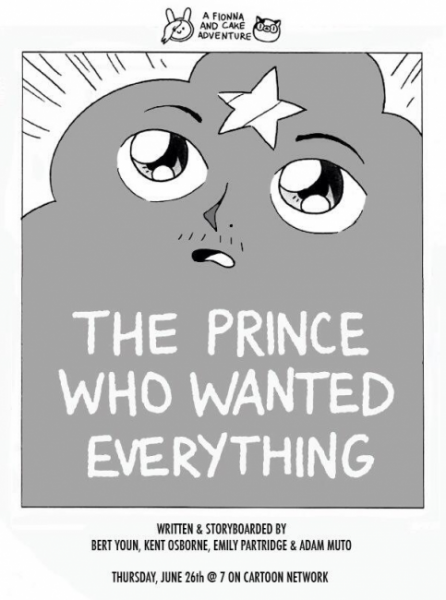