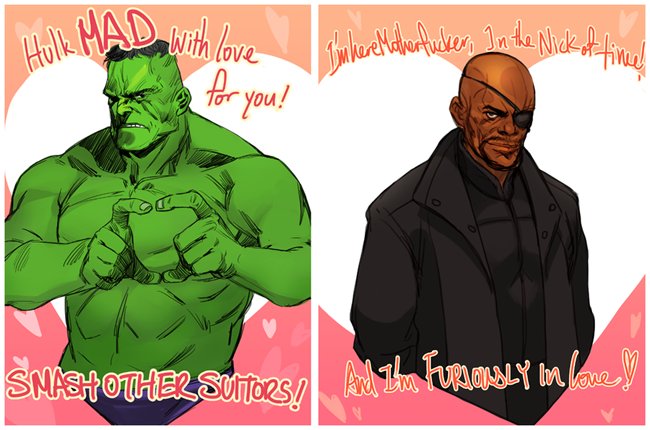 Funny Books is back, and ready to piggy back on that sweet, sweet Avengers gravy train. From now until the premiere of Avengers: Age of Ultron, Funny Books will take a look back at some of the Avengers’ most important moments. In our Valentine’s Day Special, we’re going to look at some of the weirdest, most uncomfortable former lovers in Avengers History (trust me, these couples would put the X-Men to shame!)

*Both participants have to be Avengers in order to qualify, so we’re not including Ms. Marvel’s very troubling story in Avengers #200. We’re also looking at the relationship as a whole, so couples like The Scarlet Witch and Vision don’t count, as their relationship has only recently become rocky.

5. Mantis and The Swordsman 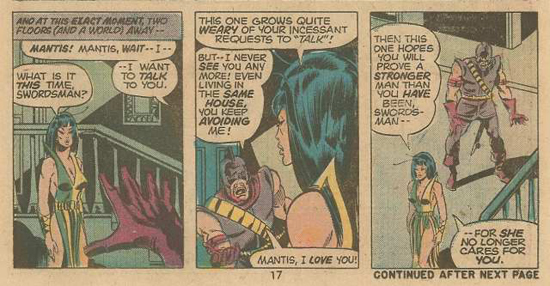 Ah, Mantis and The Swordsman, two C-List heroes with confusing as hell back stories. To keep it simple, The Swordsman was Hawkeye’s mentor who went bad, then worse, then into a drunken mercenary. When he hit rock bottom, he met Mantis, a beautiful fighter who talked in the second person. She helped turn his life around, then he became totally dependent on her, then she lost interest and started hitting on a robot, then he became a tree person, then they got double married with Vision and the Scarlet Witch. Then, she became a Celestial Medonna, then years later she came back and accused the Avengers of letting a tree person rape her. Then this turned out to be a Skrull. Now let us never mention them again.

4. Sersi and The Black Knight 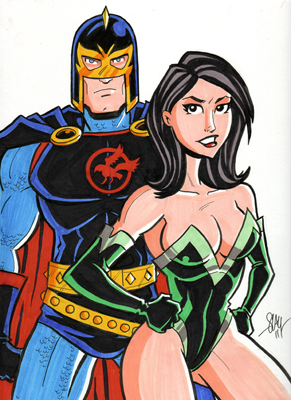 Sersi (the Marvel one, not the Game of Thrones one) and The Black Knight were the couples of the 90’s Avengers. Of course, by couple I mean that Sersi aggressively campaigned to get into The Black Knight’s pants while he kept trying to explain that No mean No. Their whole story dragged on for too long, and it involved an evil version of The Black Knight from an alternate universe that was driven crazy by his version of Sersi, so…yeah. Eventually, Sersi goes crazy and tries to kill the Avengers, and that’s when The Black Knight finally gets with her, then they both die. Comics Everyone!

3. The Scarlet Witch and Wonder Man 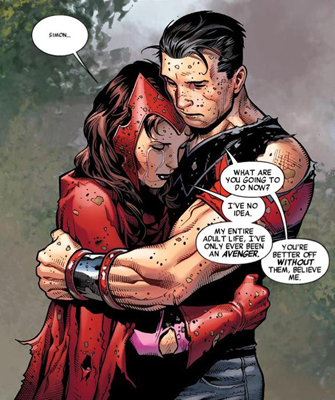 Goddamit Wonder Man. Sorry, had to get that out of my system. Anyway, the Scarlet Witch and Wonder Man have a rather confusing relationship. You see, Wonder Man is the mental imprint of the robotic Vision, longtime Avenger and Scarlet Witch’s husband. When the Vision died, the Scarlet Witch asked Wonder Man to provide his mental imprint again to save him. He said no, because he had a crush on the Scarlet Witch. Turns out, this hugely selfish and unheroic move worked out, because a few years later, they get together. Unfortunately, they get together when the Vision is reborn, so what we had was a woman sleeping with a douche who had the same mind as her former husband who was living with them in the same house. It was kinda like a love triangle involving twins. Goddammit Wonder Man.

This may be breaking my own rules, but Crystal was still with Quicksilver when she became an Avenger. Quicksilver and the Inhuman Crystal got together in the 70’s when Crystal left Johnny Storm for Quicksilver. They got married and had a little girl named Luna. Then, in an effort to assimilate into Inhuman culture, Quicksilver started his own militia. This caused him to neglect Crystal, so she cheated on him with a real estate salesman. Then Quicksilver went crazy when everyone sided with Crystal instead of him. Their marriage never really recovered from that. So what went wrong? Did they get married too fast?  Did Quicksilver’s desire for a home get in the way of love for Crystal?  Is Crystal just naturally unfaithful? Personally, I think they’re both awful people. 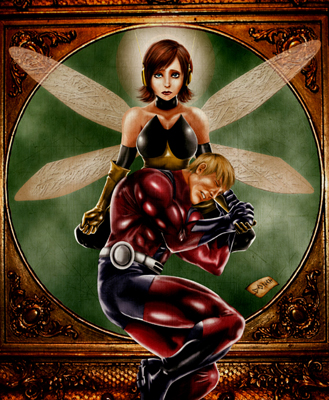 Jesus, alright. Let’s get this out of the way. Yes, Ant-Man hit the Wasp. Yes, this was horrible and spousal abuse is a very real and serious issue. But, and this is a big but, that wasn’t the point of the original story. For those who read Avengers 213 and subsequent issues, the actual story arc tried to portray Ant-Man’s spiral into madness due to feelings of inadequacy, climaxing narratively in his attack on the Avengers, and emotionally with his slapping Janet. From about 1981-2000, this couple’s story is one of healing, growth, redemption, and ultimately friendship. Unfortunately, this one instance was grafted on an admittedly bland character, and so “wife beater” became one of Ant-Man’s defining characteristics. So around 2000, when kids who grew up reading these 70’s stories became writers themselves, that’s all they remembered about Ant-Man and the Wasp’s relationship. Since then, the two have done nothing but argue, bicker, and passive-aggressively bring up the past.

Although, truth be told, that summarized a lot of Avengers couples. Happy Valentines Day!

by Alan Carrillo on October 7, 2015
Some people, Asgardian types mostly, may be wondering why everyone’s favorite Marvel villain was omitted from Avengers: Age of Ultron. In actuality, director Joss Whedon actually had Hiddleston make a brief cameo, but decided to cut him out of the [...]

by Andy Gordon on May 24, 2015
What if the cast of the Avengers had their genders swapped? Who would play them? Jennifer Lawrence as Thor? Chris Pine as Black Widow? Sign me up!
9.5

Bring On The ‘Age of Ultron’! [Movie Review]