TV
0
previous article
Marvel vs DC: Every Movie Scheduled between 2015-2020
next article
What Is Marvel's Civil War, and How Does It Relate to the Movie Universe?

On last night’s episode of Adventure Time, “Ghost Fly,” Jake swats a fly for drinking his soup and does ghost-battle with its diminutive poltergeist afterward. It’s the eponymous time again!

The hiatus has been too long, but in that space, we’ve had quite a few juicy interviews to whet our appetite, including that Rolling Stones article that had everybody and the mothers they watch the show with slapping welts into their foreheads: Pendleton Ward had stepped down as head honcho since the Fifth season, wonder of wonders! Not that big a deal since he’s apparently still on the writing team, and I’m not sure what else to find shocking—‘Pendleton Ward finds managing the most popular cartoon currently on-air stressful.’Honestly?

But we can put the gossip and hand-wringing aside at least for the time being, because Adventure Time’s returned with a pretty great Halloween episode to rank with the best of’em—it’s got some genuine scares, spot-on homages to classic horror films, wonderful character moments (Peppermint Butler, my undying love), and best of all, the ghost fly is just too damned cute…

While we’ve been on a whirlwind ride in the Sixth Season, going from this side character to that, forcing ourselves to watch Finn’s tortuous spiritual journey back to completion after being a complete disgrace of a post-breakup, we finally get an episode where the gang is just hanging out, and then something happens, plain and simple. Best of all, BMO’s included in the hijinx where he’s usually relegated to the cook waiting at home, or a convenient cellphone or something like that. 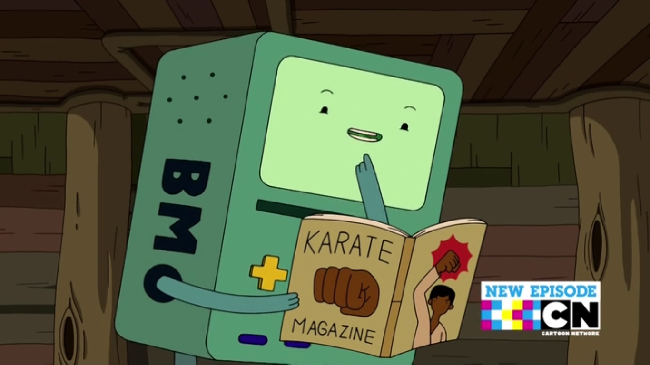 I can’t remember the last time BMO and Jake acted like such siblings, except maybe during the “Card Wars” episode: “Ghost Fly” opens with BMO practicing the karate heart-stopping punch (or the ‘dim mak,’ as fans of 80s action might recognize) while an agitated Jake with restless leg syndrome whines for him to stop. Finn’s on the couch reading a boys’ adventure mag, which is strange, why would a boy who’s fought Liches and things want to read about a boy chased by otters…

It’s a really domestic scene that we haven’t been getting as often, which just highlights how much stuff there is to do in Adventure Time: we return home to the Treehouse and it’s like a whole new dimension.

Ever the fatty, Jake makes a soup to calm his nerves, and strikes down a fly as it lands to sample his cooking. Jake acknowledges this unfortunate arrangement of fate, but his prejudices prevail: “I’m sorry you were born a fly and I had to kill you. You disgusting, d-i-s-g-u-s-t-i-n-g creature.” I love the way John DiMaggio relishes every syllable in that and the following scene-closing line: “BMOPLEASE.” Mr. DiMaggio, it’s been too long. 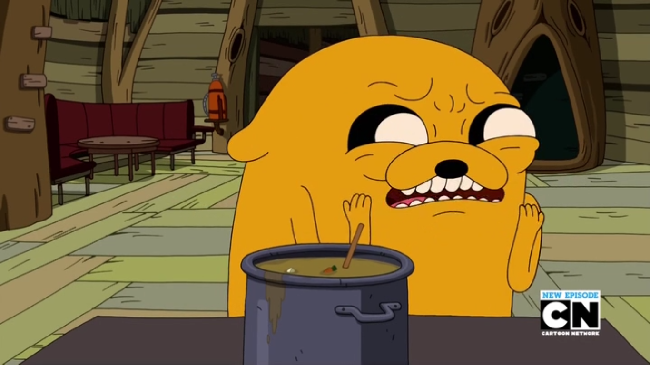 That night, Jake’s awakened by the sound of 30s jazz played on a rickety phonograph and descends the stairs to turn it off, where a toy cymbal-monkey startles him. Then the bane of his sleepless night descends: the ghost fly is, well, about the size of a fly, wears a tiiiiny shroud, wields a tiiiiiny scythe, and makes the goofiest dang ‘OooOoOoo!’ sound you’ll ever hear. In other words, he’s cute as f***.

Which makes Jake’s paranoia all the more puzzling—it’s never been stated before (but makes sense given his love of food) but it seems Jake can be a serious germophobe; Finn understandably doesn’t see what the big deal is as he’s pondering the little ghost plaguing his buddy, but Jake’s convinced he’ll get tuberculosis, polio, dysentery, and dirty fly poop all over his soul… But however unreasonable his fear was before, it’s given birth to a very real fear now, as that ghostly scythe is sharp as the real thing, even if the ghostly body’s untouchable.

As they’re being chased in and out of the house Scooby-Doo style, Finn asks the astute question of what unfinished business the fly has, which is common sense after the “Ghost Princess” episode, but Jake just wants the thing banished and swatted, and calls on the most dark magic-y occult enthusiast they know: Peppermint Butler, Princess Bubblegum’s mint-servant and professional practitioner of all things arcane and morally questionable. He arrives on the scene silhouetted against the background in a hilariously spot-on nod to The Omen, looks pretty capable on arrival—he knows his magic circles and brought a bag full of arcane weaponry—until the bag is promptly stolen by the fly even as he’s bragging about it. Pep-but consequently makes it for the window and heads for the hills. Go with my love, sweet Pep-but. 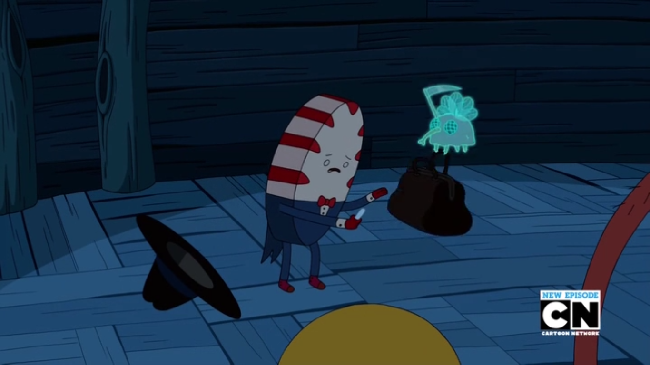 From there, it’s a treacherous game of hot-lava and safe-spots, as the gang tries to make it through the night enclosed in their safety circles. Behind them, Finn’s magazine creepily flips back and forth, and opens to that ending he’s been saving for tomorrow. Sure, it’s a trap, but Finn can’t resist the urge: he tries to extend the magic circle by drawing larger and larger circles extending to the table (and ends up drawing a voluptuous woman somehow—I guess Finn’s still lonely). He reads the apparently hilarious ending with his back to Jake and BMO, his chuckle starts out sincere and quickly reaches the creepy level of Jack Nicholson in Batman looking in the mirror for the first time. Finn turns to them, his body possessed, his face transfigured into a fly’s, and he writhes on the ground in the throes of transformation before flitting up to the ceiling, where he crawls like an insect and twists his head fully around to face them, and then vomits up some green goo. Damn. The Fly and The Omen, sort of random, but I love it.

Jake’s had enough at this point, and he and BMO hatch up a ridiculously unsafe-sounding plot to stop Jake’s heart with karate long enough for Jake to do battle with the fly on the ghostly realm, before resuscitating him with some reverse karate. Absolutely fool-proof, and the first half of it works: Jake tells BMO a joke without the punchline to get some unfinished business going (“What do you call a bear that only attacks guys named Paul?”) and is abruptly met with a dim-mak to the chest. This marks the second time Jake has “died,” the first being in “Sons of Mars” where we also got a glimpse of the afterlife.

Jake reawakens on a ‘lower-level deadworld,’ part of a convoluted scheme of the Adventure Time afterlife that’s only been hinted at, with mentions of 97th deadworlds and ascending to higher levels of death after completing your unfinished biz. Apparently, the plane of death is concentric spheres of advancement, or like a grand RPG, if you will. 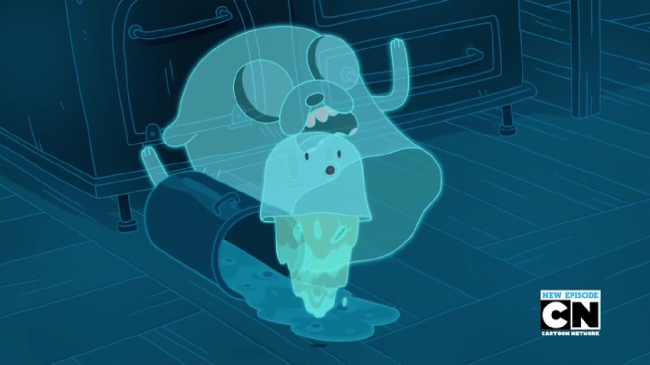 The deadworld is as damned cute as the ghost fly; it’s full of little critters wearing shrouds, a table wearing a shroud, a horse wearing a shroud (looks a bit too close to a Klansman’s steed if you ask me), and there too is the ghost fly, but Jake doesn’t seem any better-equipped to fight it; the ghost fly’s hilariously fast and powerful, and proves unstoppable until Jake spills the soup in the kitchen, releasing the ghost of the soup (cute overload…) for the fly to sip on, thus finishing his unfinished biz.

Jake realizes that the fly only wanted to finish this unfinished biz, and watches as he ascends to a “glorious new peaceful realm,” that he never gets to see, because Jake swats him into dust, proving he’s learned nothing. He wakes up in a hospital and tells BMO how good his plan was, as BMO makes the shifty eyes and Doctor Princess sighs in relief, defibrillator-in-hand.

It’s pretty clear that Adventure Time has lost none of its potency over the hiatus, and if anything, displayed a strong return to its roots with a simple ghost story involving the core gang. It’d still be nice to get a more comprehensive look at the other deadworlds, especially if they look as cool as Death’s Zen garden. The next episode doesn’t yet have a release date, but look forward to “Evergreen” anyway; it’s the first episode that take place pre-Mushroom War, and tells the creation of the Ice Crown. Big plays! 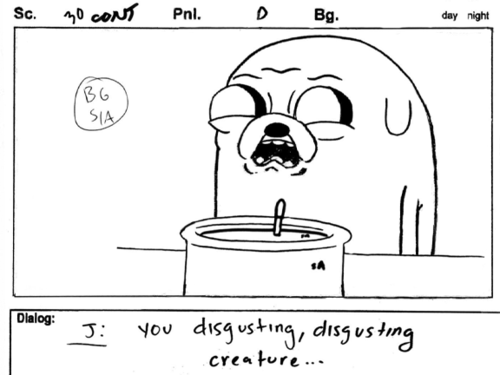