Well, this is it friends. The final trailer until the genuine article hits in December…. and it’s a doozy. Tons of dynamic shots, operatic emotions, and imagry that’s sure to burn your retinas away with their sheer force of awesome. Remember tickets are on sale right now, so grab them before someone grabs that seat you’ve been eyeing for the midnight show!

But, while you’re waiting for all the slow ticket sites to process your order… let’s delve into this bad boy and see what we can figure out. Before looking at these caps, if you haven’t seen it yet… here’s the trailer:

It seems she’s exploring something, something that’s requiring her to rappel down a long shaft. By the way, remember that article we did about shot composition and depth? There ya go.

Rey walking the dunes of Jakku with BB-8.

There’s a transport taking off in the distance. Is it just us, or does it look like the Republic transport at the very start of The Phantom Menace? Side note: check out the AT-AT foot in the foreground of the shot.

Rey (presumably) watching the transport take off wistfully. Wishing she was anywhere but Jakku. She definitely has Luke’s adventurous streak to her.

A sweeping shot of that First Order rally at Starkiller Base we’ve seen before.

Finn, clearly as a crossroads as he realizes he needs to find a new purpose in life.

There’s that Tie Fighter we know crashes on Jakku. We know for a fact that the First Order Star Destroyer is in orbit.

Finn, after the crash, coming up on a settlement on Jakku where he’ll most likely meet Rey. Man, it must suck to be dressed in a long sleeved black clothing in that heat.

The bridge of a First Order Star Destroyer. Kylo Ren is watching something rather brilliant streak across the sky. Perhaps this is a shot from Starkiller Base? Notice the trademark J.J. Abrams lens flare. Overall, he’s been very restrained but it seems he indulged himself for this shot.

Kylo Ren pledging to continue Vader’s work. Funny how they’re making Vader out to me this messianic figure instead of the Emperor.

The Millennium Falcon being chased by TIE Fighters on Jakku. These shots are great, with the camera weaving around with the fighters.

It seems Han Solo is our Obi-Wan in this film. He’s a believer in the Force, introducing a new generation to the possibilities it holds. It’s a great character to use, considering he didn’t think it existed at all in A New Hope. Han’s come a long way.

Side note: Apparently the Millennium Falcon has nicer holoprojectors now. Is that a galaxy map they’re looking at?

A SWEET shot of the Falcon going to hyperspace. Probably the best one of the whole saga.

Kylo Ren standing in the rain. Are those other Knights of Ren with him? It looks like they just slaughtered a whole bunch of people. This could be a tough fight for our heroes.

X-Wing assault! Looks like Poe’s squadron are crashing the gates of a First Order battalion. This looks like a big action sequence on a planet with a bunch of ruins.

Finn and Poe at the Resistance base. Seems like Poe has a good spirit of comradery about him… and it seems alien to Finn.

Something blowing up on Jakku in front of Rey and Finn. Her speeder, perhaps?

Finn, Rey, BB-8, and Han on the ruin planet. Probably on their way to see Maz Kanata. Side note: check out the flags hanging on top. One of them is sporting a Mandolorian insignia: 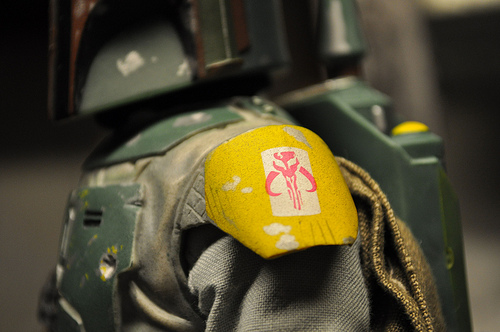 There’s that shot of Luke and R2 again.

More of the First Order storming that village.

Rey crying over… something as she looks up. Could it be Luke? Han? A rock? It’s very hard to tell.

Finn, Chewbacca, and Han being held up. Presumably by the First Order. We’re guessing  this is just before Poe’s X-Wings show up to own face.

It looks like the Resistance is going to assault Starkiller Base… and the First Order is mounting a helluva defense. The Battle of Starkiller Base anyone?

Air to ground fire as an X-Wing blasts through a stormtrooper.

The Millennium Falcon just rammed through something to shake a TIE. We hope those deflectors are still intact.

An explosion… somewhere? Starkiller Base?

At the Resistance base. Leia is clearly upset about something as Han holds her. Did something happen to Luke?

It looks like Finn is in way over his head, as an unmasked Kylo Ren advances…

Overall, it’s a great trailer. Spot something we didn’t? Let us know in the comments!