Magic: The Gathering Tournament in Vegas Wants to be the Biggest Card Game Event Ever

Way back in 2006, a World Series of Poker event set the world record for the most card game players in a single tournament, under one roof. The final tally was 8,773 participants. Next month, a Magic tournament just might shatter that record.

What tournament is this?

M:TG developer Wizards of the Coast and Channel Fireball are hosting a Grand Prix event in Vegas next month. The event, which will feature the release of Modern Masters 2015, has booked a space that can accommodate 10,000 concurrent players. If the organizers can attract an attendance that’s anywhere near capacity, they’ll have handedly beaten a world record that’s stood for nearly a decade now.

It’s a huge gambit, and one that is in no way guaranteed to work, but hype over this new set (which will include some of the game’s most coveted cards) is reaching a fever pitch, the organizers are very optimistic.

How likely is it to actually break the record?

Realistically though, the event organizers might have been a bit too optimistic. The current attendance record for a Magic tournament is just 4500 people in 2013. That being said, that record-setting event was for the release of the original Modern Masters set, so if any event can do it, it’s next month’s Grand Prix. 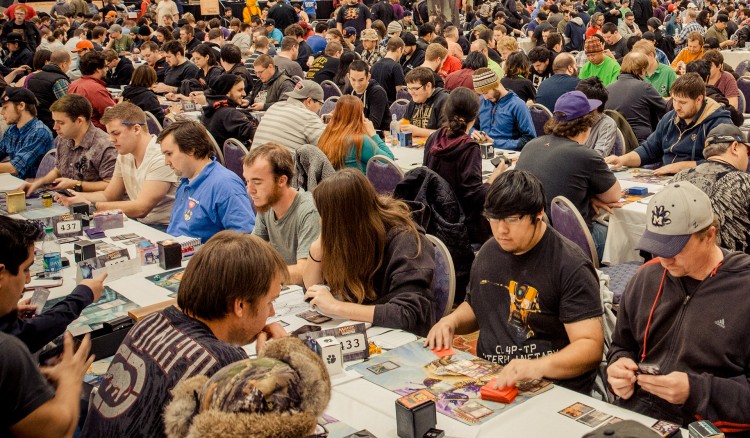 However, that’s not where the story ends. Not only will this Magic event be gunning for the 2006 record, but it will also be competing with a Poker tournament looking to do the exact same thing. To make matters even more interesting, both events will be happening on the exact same weekend.

What’s going on in the Poker world?

Despite its continuing popularity, the World Series of Poker has seen declining numbers since the 2006 world record, and in the past few years, they’ve struggled to even break 7,000 attendees. To breathe some fresh life into things, they’ve announced a massive tournament called “The Colossus.”

The tournament will feature a relatively low (by Poker standards) $565 buy-in, and a guaranteed minimum prize pool of $5 million. Just like Wizard’s gamble on their Magic Grand Prix event, The Colossus will be a huge risk for the World Series of Poker. The prize pool is so massive that they’ll need to topple their 2006 record to just break even.

With both events betting the farm on some huge attendance numbers, Las Vegas seems like a pretty appropriate venue.

When and where will these events take place?

Both events will be held over the course of a weekend, beginning on May 29.

The World Series of Poker’s Colossus will take place at the Rio Hotel and Casino, while Magic’s Grand Prix will be held at the Las Vegas Convention Center.

Magic: The Gathering – Shifting From TCG to High Fantasy Narrative

by Andrew Tran on August 31, 2015
Magic: Origins made it clear that the game is entering a new phase, one where sprawling story arcs and vivid characters take center stage like never before. We spoke with MtG set designer Shawn Main for details.

by Ryan Matsunaga on April 2, 2015
The first wing of Hearthstone‘s new solo adventure, Blackrock Mountain, is now available. Here’s how to burn through it and earn those new cards!

Hearthstone’s Blackrock Mountain: What You Need to Know