New Music Weekly: The New Adele Album is Finally Upon Us! 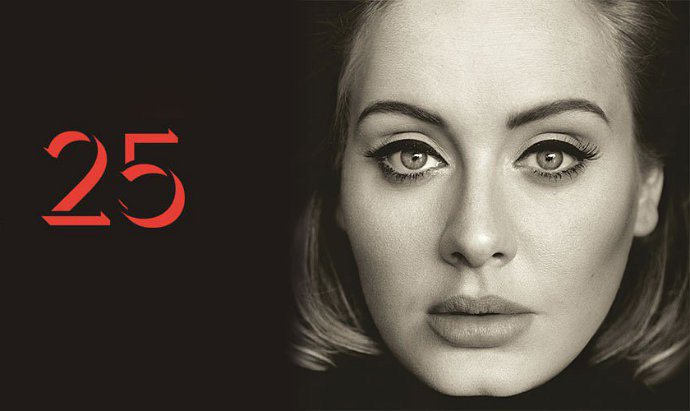 Hey there music lover! Like new stuff? Great! You’ve come to the right place. Each week all sorts of audiolicious goodies are unleashed onto the masses and this is where they come to be judged. I’ll tell ya what’s good, what’s bad, and what’s a waste of your time. Thanks for stopping by!

Well, it’s finally here. Timed to a week where nothing is really going on and just in time for the good ol’ Christmas season, it’s the new Adele album, 25¸ the diva’s third effort and first proper album since she engulfed the world with the massive 21 in 2011. I’m sure by now you’ve all heard, and probably downloaded the new single “Hello”. I Have yet to hear or purchase it and, well, I’m going to avoid it as much as possible because I know I’ll be hearing it every ten minutes for the next five years.

Incidentally, since you asked, this month marks my third year full of writing for 8th Circuit / Overmental. That seems like an accomplishment. Mind you, New Music Monday / New Music Weekly the column doesn’t turn three until March (I wrote reviews here for six months or so before starting this weekly column), but it still seems like a milestone. I’d like to thank Ryan and whoever else helps keep this thing afloat for making room for me these last few years.

Um… yeah… so there’s a new Enya album coming out this week. Everyone who knows me is aware that I have a bizarre, but legitimate, phobia of Enya. Her music, which I respect, just gives me the wllies. I know I’m in the minority because she sells a fuck load of records (her last record, a fucking Christmas record sold over three million copies for god’s sake) but I just don’t dig it. It’s like the first half of The Decemberists’ Castaways and Cutouts, just too creepy for me. Anyway, this is the Irish enigma’s first record since 2008 (that Christmas record).

This is the part of the week where we say goodbye to those who’ve played their last solo. Rest in peace and rock on brothers and sisters.

*Please note that this column was written before the tragic events in Paris. Our condolences to the families of all of the victims of the attacks in Paris.

New Orleans music legend, and a vital part of American music since forever ago, Allen Touissant, died at the age of 77.

Scottish drummer Andy White, who played with The Beatles for a minute, died at the age of 85.

My god, this Colectiv nightclub fire in Romania just gets worse and worse. Initially the disaster had claimed the lives of forty nine people including two members of the band Goodbye to Gravity. This week two more members of the band were added to that list, drummer Bogdan Enache, and bassist Alexandru Pascu.

Teenage Bottlerocket drummer Brandon Carlisle passed at the age of 37.

Fucking Gunnar Hansen, who played Leatherface in Texas Chainsaw Massacre, died at the age of 68.

Drummer Eddie Hoh, who played with everyone that mattered in the 1960s from Donovan to the Mama’s and Papa’s, died at the age of 71.

Country bumpkin Chhttps://www.youtube.com/watch?v=cpDIo0cPZX0uck Pyle died at the age of 70.

Swedish jazzer Kjell Ohman died at the age of 72.