Unless you’ve been living under a rock for the past week or two, you’ve probably heard about the colossal Sony hack that was linked back to those commie bastards in North Korea. As a result of that hack, numerous sensitive documents were leaked onto the internet where we discovered, among other things, that Alex Trebek nearly left Jeopardy when an overprotective mother wrote a naggy letter to show producers over Trebek’s alleged “insensitivity” towards her last-place-finishing daughter who competed on Jeopardy Kids (which is a terrible concept in and of itself, but that’s another story).

But the fallout doesn’t end there. Once the hack was traced back to North Korea, attention suddenly turned to the impending Christmas day release of The Interview, starring Seth Rogen and James Franco. Sony, in an epic display of nut shrinkage, quickly made the decision to cancel the premiere of the movie and, as of this writing, Sony has no current plans to release it in any form.

Of course, even though Sony was quick to backpedal, several movie theaters had a backup plan in place. Alamo Drafthouse, among several other theaters, was set to run a screening of Team America: World Police in protest of the cancellation of The Interview.

But wait, there’s more! Seems Paramount Pictures was quick to follow in Sony’s footsteps because they responded by pulling any and all screenings of Team America: World Police, proving to the rest of the world, and North Korea, that this is all it takes to send us scurrying in retreat.

Paramount’s reason for canning the screenings of the film are the same as Sony’s for pulling The Interview. The threat of full-blown terrorist attacks by “The Guardians of Peace”, which was already deemed non-credible and virtually impossible to follow through on seeing as there is no proof that the “Guardians” have the manpower or the resources to attack anything within United States borders.

Obviously, terorrist threats aren’t funny or something to be taken lightly, but so far, “The Guardians of Peace” haven’t achieved much more than a hack on Sony’s internal network and an anonymous boast session about it on Pastebin.

As of this writing, Paramount has indeed completely pulled the screenings of Team America: World Police and it isn’t likely that they’ll suddenly have a change of heart come Christmastime. This entire situation is ten times more ridiculous now that the initial Sony hack has been traced back to North Korea because, it’s North Korea. Kim Jong Un probably has “Threaten to blow up America with magic genie bottle rockets” listed on his daily schedule, right after “Update bowl haircut” and right before “Play in bathtub with nuclear rubber ducks”.

In short, death threats from North Korea are so common that they don’t often make the news anymore. The folks at Sony and Paramount should be ashamed of themselves for cowering to such absurd circumstances. With that said, I’m going to go play some Half-Life 2 so I can regain some of the hope for humanity I lost reading the initial reports about this.

But here’s a picture to hold you over: 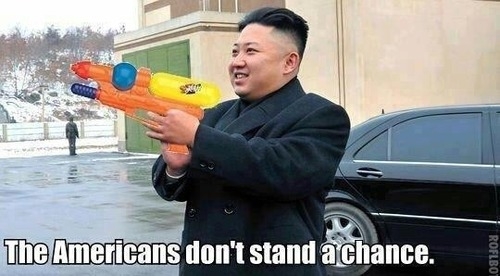 Transformers Cinematic Universe to Be Rebooted after This Year

by Ryan Matsunaga on February 16, 2018
Paramount and Hasbro have expressed plans to reboot the current continuity of the Transformers movie series.

How Transformers Wants to be More Like the Marvel Universe

by Ryan Matsunaga on April 7, 2015
Marvel more or less revolutionized blockbuster cinema by pioneering what we now call a “Cinematic Universe,” and now everyone wants in.

BBC and Paramount Are Building a Theme Park, Here’s What We Know So Far