EA’s E3 presentation this year had about as much FIFA and Madden as we’ve come to expect, but somewhere between all the sports games, they happened to feature a tiny little indie game they’re publishing, called Unravel. Amidst the big explosions and space warfare, Unravel looked like something unique, with heart, and a story to tell.

At the EA booth on the show floor, I actually got a chance to play Unravel and was really blown away by it. Despite the fact that I was in a cramped room with seven other guys playing their own versions of the game, I could feel the emotionality of the game, and could tell that this was something special.

Yeah, there was a certain something about the game that was really tugging at my heartstrings. See, the game was crafted with the idea of a string, or a piece of yarn, that could connect us to our memories. The story concerns an old woman living by herself, who has become disconnected with her family and friends.

In the game, you play as Yarny, a little creature made of yarn who traverses the wilderness, leaving a trail of yarn behind him in hopes of reuniting the old woman with her family. The whole game utilizes visual metaphor in a really fascinating way, other than at the beginning (and possibly at the end) there are no cutscenes, per se, everything you need to know is told to you through gameplay. 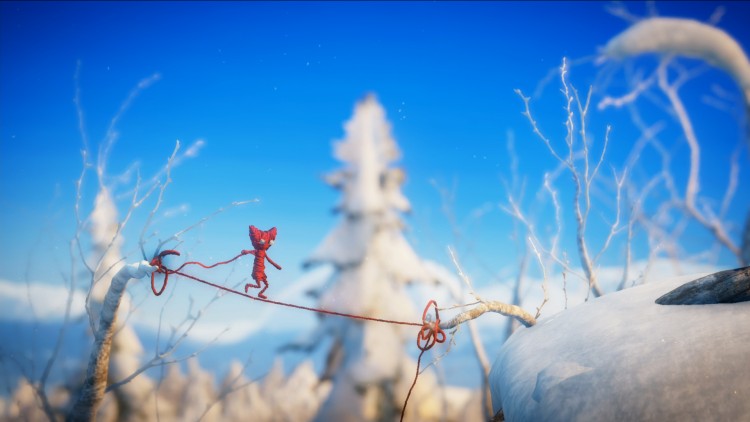 So the “story” is a bit ambiguous, then?

Right! As Yarny, you’ll occasionally find these motes of dust floating in the air, and as you pass through them, you’ll get pictoral glimpses of the old woman’s memories of her family. In my playthrough, it seemed like these were helping to tell us just how she became disconnected, or lost touch with them, but the great thing about this form of storytelling is that it’s entirely up to the player to interpret these images.

It works, though, because the game isn’t about something specific, like having to stop terrorists from blowing up America, or being the strongest, killingest space marine, it’s about something more subtle. The game is about loss, and disconnection, and love and family and memories.

That’s pretty neat, but what if I like being a space marine?

Hey, that’s totally fine! Look, EA also has a big game you might’ve heard of called Star Wars Battlefront and that game was plenty fun, too. But I want you to take a look at the creative designer on stage at the EA conference presenting the original Yarny that he created out on a camping trip real quick:

Look at how much he’s shaking and how nervous he seems to be. I bring this up not to make fun of him, but to point out that this isn’t a guy who’s used to being on stage in front of thousands of people. This isn’t a PR person who’s used to trying to sell the idea of a game to audiences. This is just a guy who had an idea and got a chance to make it real and put his heart into it.

And when you play the game, you can feel it. There’s love and passion flowing out of every pixel of this game, and it makes it a really magical experience to play. Sure, ambiguous, visual storytelling might not be for everyone, but if you think it’s something you might enjoy, I urge you to check it out, because it’s not that often that something like this comes along, especially in this industry.

by Andy Gordon on February 1, 2016
So far, Star Wars Battlefront has only included content inspired by the Original Trilogy time period, and from the sound of it, that’s not going to change.

by Jeff Rush on October 2, 2015
A Battlefront beta has been officially announced. We’ll be keeping this page updated with everything we know about it.

Visceral’s Mystery Star Wars Game is Sort of Like 1313 and Uncharted. Could it be a Dark Forces Reboot?