Books
0
Comic Review
previous article
Age of Ultron: Where Did We Last See Each Avenger?
next article
Stretch Your Music Library With The Infinite Jukebox 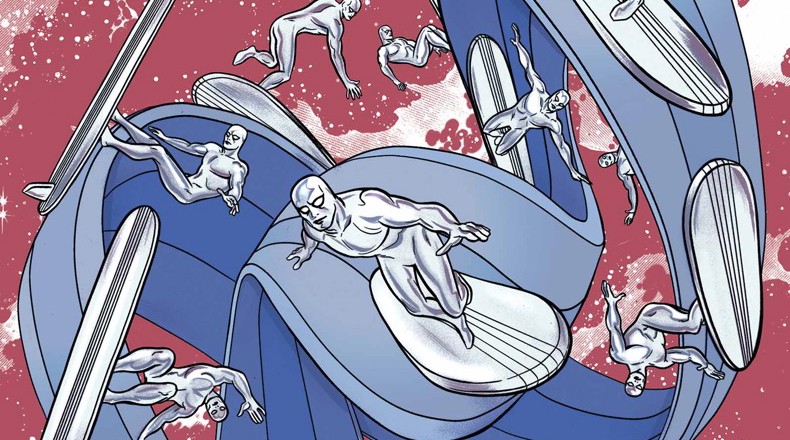 Silver Surfer #11 is the culmination of Dan Slott and Mike Allred’s year-long storyline featuring Norrin Radd, the Silver Surfer, and the Earth girl Dawn Greenwood traveling throughout the cosmos and having their share of strange, fun adventures.

The series took a darker turn when Silver Surfer ended up on a planet with the last survivors of the places that he helped destroy when he was Herald of Galactus. However, after a successful confrontation with Galactus last issue, he has decided to play the role of Herald once more and find a world for these six billion refugees to inhabit.

This search makes up the story of Silver Surfer #11, which is an experimental comic, to say the least. It is written by Dan Slott (Amazing Spider-Man) with art from Mike Allred (iZombie) and colors from Laura Allred (F.F.).

So how is this comic experimental?

It’s hard to describe, but Mike Allred recreates a time loop in the pages of Silver Surfer #11. The plot of this comic is very similar to films like Groundhog Day and Edge of Tomorrow where the same day is recreated over and over again as the Silver Surfer finds a suitable planet, some of the settlers get sick, there is tension between the settlers, an attacks comes, and so on. But what makes this different from the aforementioned film is that the reader has to “solve” the time loop and make sure that Silver Surfer comes to some kind of closure in his relationship with Dawn as well as finding somewhere for these refugees to live.

Dan Slott and Mike Allred lay down the panels of the comic like a Mobius strip on a comic book page as the events repeat over and over again. I read this comic digitally, and the reading experience is like watching a film strip with white negative space. It could be compared to the famous “Perfect Symmetry” issue of Watchmen, which tells the same story forward or backward, but Allred isn’t limited by the nine panel grid and places his “strip” all over the page using different panel types of different characters from bendy, trippy ones for the Silver Surfer to chunky ones for his enemies, General Ouroboros and the Pteriots.

All in all, Silver Surfer #11 is a one of a kind reading experience

How is the actual story and plot?

Even if you haven’t been keeping up with Silver Surfer, issue 11 is a great, standalone sci-fi yarn. It explores a lot of the great themes of science fiction, found in shows like Star Trek and Doctor Who, like arguing whether the needs of the few outweigh the many and finding a home for an incredibly diverse population (in retrospect, this comic is basically Oregon Trail on the cosmic spaceways with settlers dying from alien pollen instead of dysentery).

Dan Slott gives you a lot of different perspectives on the story beginning with Silver Surfer along with his human companion Dawn, some of the settlers, and even General Ouroboros, who ends up being quite the sympathetic (and hilarious) foe. He also looks at the nature of fate, free will, and some interesting philosophical ideas through the lens of a cool sci-fi story.

The form really does inform the content in Silver Surfer #11 as Surfer has been struggling with using his powers after his past of choosing planets for Galactus to devour. The repetition of Surfer looking for a new planet, thinking it’s good, being proven wrong, but still fighting shows his endless struggle for redemption.

No matter how much good he does, people will still see him as an accessory to genocide. To get out of this loop of self-defeat, he must reach his full cosmic potential,and the way the comic shows this is brilliant. Plus there are some good emotional scenes between him and Dawn.

Should I pick up this comic?

If you like any kind of science fiction or time travel story and want to see the two top creators stretch the limits of the comics medium, Silver Surfer #11 is the comic for you. $4.99 is a little steep for a single comic, but I think the interactive nature of the book makes up for it. Also, the neo-Kirby art style of Mike Allred with retro cosmic colors from Laura Allred is worth poring over.

Silver Surfer #11 is an example of a story that could only be done in comics and is a career highlight for both Dan Slott and Mike Allred.

Logan is a senior English Lit major at the University of Mary Washington. He loves comics, music (especially New Wave/Brit Pop), film, TV, mythology, and poetry. Joss Whedon is his master, Kitty Pryde is his favorite superhero, and his current favorite comic is The Wicked + the Divine.
You might also like
MarvelMarvel ComicsBooksComic Book Reviews