Star Wars Episode VII: What is the First Order and the Resistance?

First it was the Rebel Alliance vs. the Galactic Empire. Then the prequels brought the war between the Seperatists and the Republic. And now, Episode VII will introduce two new (sort of) factions: The First Order and the Resistance.

At Star Wars Celebration this weekend, props from The Force Awakens are on display, including Stormtrooper costumes and a model X-Wing. Interestingly though, the attached descriptions don’t mention Rebels or Imperials. Instead, it’s the “First Order Stormtroopers” and a “Resistance X-Wing Fighter.”

What is the First Order?

Given what we saw in the trailer, my guess would be that the First Order is what the Empire morphed into after Palpatine’s death in Return of the Jedi. Considering how spread out the Empire was (an estimated 1.5 million planets at one point), it’s unlikely that one man’s death would result in its complete collapse.

Instead, maybe an even more fanatical leadership emerged amid the chaos. “The First Order” sounds almost religious, and definitely less official or governmental than the Empire.

We can already see a visual representation of this new movement in the latest trailer. The emblem that’s displayed behind those Stormtroopers in the screencap above is similar, but very distinct from the “classic” Imperial Crest. 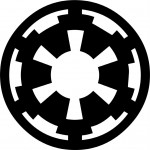 Such a big shift makes sense. Without Vader, the Emperor did not have an official successor to replace him in the event of his death; leaving a huge power vacuum in the aftermath of the battle above Endor. Whoever managed to take control of the Empire’s forces would have needed every advantage they could get, and bringing in a more ideological (perhaps even cultish) angle to inspire loyalty seems like one way to go.

What is the Resistance?

Much like the First Order, it seems the Resistance is a re-branding of the rebel movement from the original trilogy.

It seems that unlike the EU material, the Rebel Alliance wasn’t able to take control in the wake of Palpatine’s death. Instead, the “Resistance” seems to imply that the fight is still ongoing, even three decades later. That’s a heck of a lot bleaker, but probably more realistic.

Why they would feel the need to change the name from the Rebellion to the Resistance though, I have no idea (it feels like such a small change).

One possibility is that the Rebel Alliance isn’t the scrappy underdog movement it once was, and maybe now is actively engaging the First Order on a level playing field (that would explain those Han Solo/Star Destroyer rumors we keep hearing). In that case, it would make sense that they would want a new name, though one that wouldn’t compromise their image as freedom fighters.