Star Wars Canon Catch-Up: What is the Imperial Remnant?

So, what’s the deal with the Imperial Remnant in the current continuity?

As far as we know, the Imperial Remnant doesn’t actually exist in the current continuity. While we have our theories as to the future state of the Empire, our knowledge of post-Return of the Jedi events is very limited. We know from Star Wars: Uprising that some sectors of the Empire tightened their grips after the Emperor‘s death, but the New Republic continued to fight against them. At the moment, the closest analogue to an Imperial Remnant in the current canon is the First Order in The Force Awakens.

What about the Imperial Remnant in the Expanded Universe?

After the Battle of Endor, the Empire continuously lost ground to the New Republic for several years until, thanks to an operation from Rogue Squadron, they finally lost Coruscant. Though the Empire saw a few resurgences thanks to a cloned Emperor Palpatine and Grand Admiral Thrawn, they were ultimately pushed back. Territory once belonging to the Empire broke apart among Moffs and Regional Governors who declared themselves independent warlords. Many of these Imperial warlords became isolationist powers, while several such as Admiral Natasi Daala waged costly and ultimately defeated campaigns against the New Republic.

Several warlords, however, consolidated their territory into a unified government: The Imperial Remnant. Led by Admiral Gilad Pellaeon, Thrawn’s former second in command, the Remnant was a martial oligarchy that actually employed several reforms such as abolishing slavery and minimizing anti-alien prejudice. Instead of attacking the New Republic, the Remnant focused on expanding its territory in the Mid and Outer Rims. The New Republic responded with force, and for years the two powers skirmished along with their borders. It became a game of move and counter move… but one that the Remnant was slowly losing. 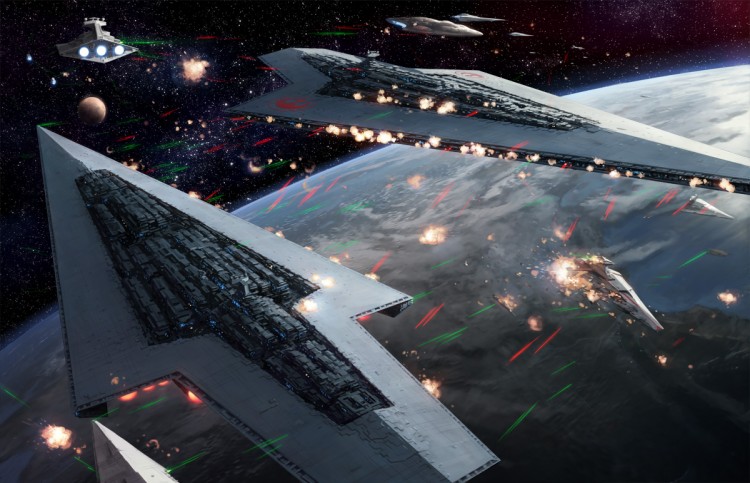 In an effort to bring more military might to the Remnant, their leaders hired a con artist named Flim to impersonate Thrawn and gather support from the rogue warlords. The ruse worked for a short time, and the Imperials managed to launch one last campaign against the New Republic that was eventually rebuffed.

Both sides realized hostilities could no longer be afforded. A peace treaty was signed between the Remnant and the New Republic, ending a long and bloody Galactic Civil War.

The Imperial Remnant became an isolationist state until the Yuuzhan Vong invasion. Seeing the threat the Vong represented to the galaxy, Grand Admiral Pellaeon sent a fleet to assist the New Republic. For a time, many Moffs thought the Vong would leave the Remnant be, but a few years into the war Remnant space was invaded… an attack that Pellaeon managed to defend against spectacularly. The Remnant eventually entered into an alliance with the New Republic and its successor government, the Galactic Alliance, for the remainder of the war. When the war was over, the Remnant became a part of the Galactic Alliance while keeping their autonomy.

What does the Expanded Universe tell us about the Imperial Remnant in the new continuity?

The Empire is a massive entity, and it’s unlikely that it could simply roll over and die after the death of the Emperor. The EU showed us that the Empire may change, but it wouldn’t disappear altogether. The new continuity seems to be taking a page from that mentality with The First Order, albeit with a religious fundamentalist twist.

For the sake of drama, don’t expect to see a peace treaty signed between First Order and Resistance forced until at least the end of Episode IX. However, it happening at all is not out of the question. It depends on the story the filmmakers want to tell.

While we’re waiting for more post-Return of the Jedi information, check out our previous entry of Canon Catch-Up about Boba Fett.

Aaron Edwards is a Los Angeles based screenwriter and filmmaker. On one faithful night when he was five, he sneaked out of his room and watched Aliens on cable. Soon after, he fell in love with storytelling and has been a big ol' nerd ever since. You can follow him on twitter @aaronmedward
You might also like
Return of the JediStar WarsStar Wars: The Force AwakensMoviesFeatures