Movies
7
previous article
Just How Much Is Star Wars #6 Shaking Up Han Solo's Backstory?
next article
Aquaman Hires James Wan to Direct, and the Official Synopsis Is Revealed 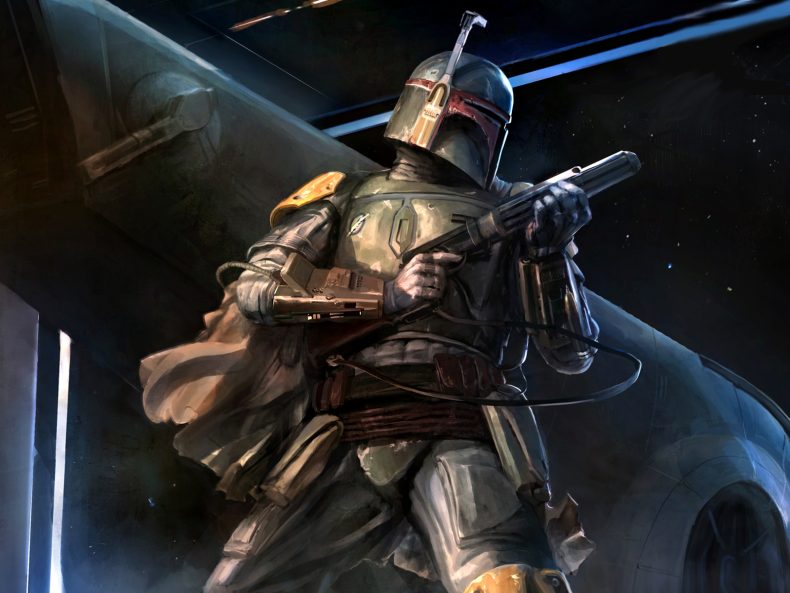 So, what’s the deal with Boba Fett in the current continuity?

When a clone army was commissioned on Kamino after the Battle of Naboo, Mandalorian bounty hunter Jango Fett was recruited by Count Dooku to act as its genetic basis. In addition for his monetary compensation, Jango asked for an unaltered clone of himself: a son he would named Boba. 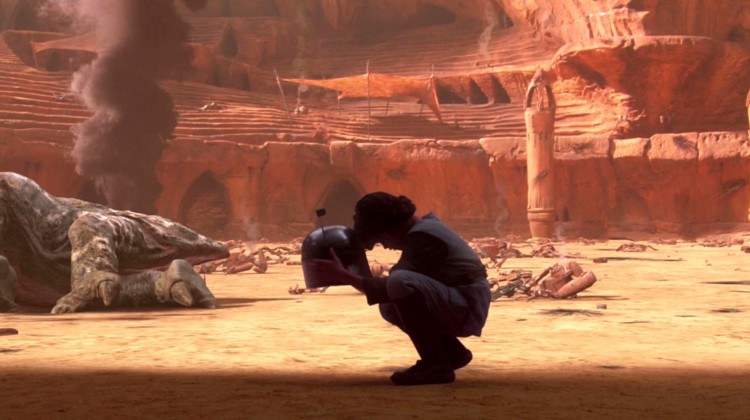 Jango raised Boba, teaching him his trade and how to survive in the roughest parts of the galaxy. When the Clone Wars broke out, however, Jango was killed at the Battle of Geonsis by Jedi Master Mace Windu. During the war, Boba joined a team of bounty hunters that included Aurra Sing and Bossk in hopes of getting revenge on Master Windu.

Boba Fett infiltrated the Republic cruiser Endurance disguised as a clone cadet. He sabotaged the ship and destroyed it, but missed his chance to kill Windu. Jedi Knights Ahsoka Tano and Plo Koon hunted Boba down and arrested him. After his time in prison, Boba joined a team of bounty hunters on the outer rim and many years later found himself in the employ of Jabba the Hutt. 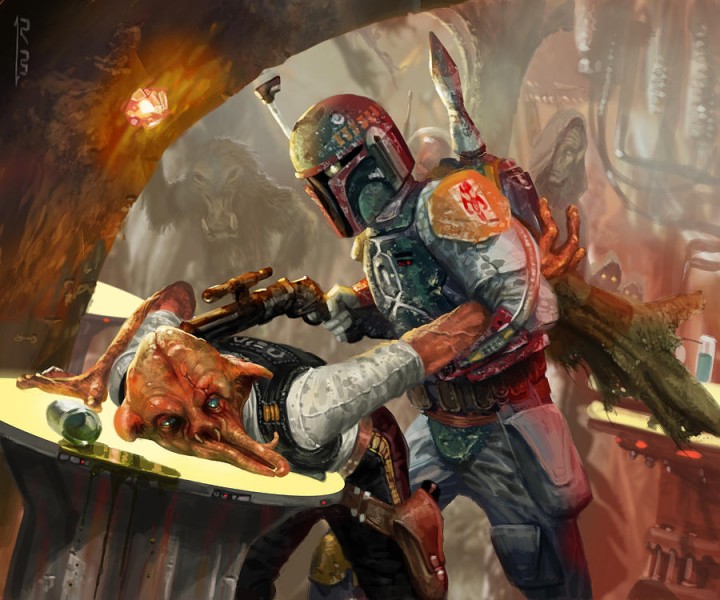 Several weeks after the Battle of Yavin, Darth Vader went to Jabba the Hutt in search of bounty hunters to capture the Rebel Alliance pilot who associated with Obi-Wan Kenobi and the Millennium Falcon. Boba was hired and started his search in Mos Eisley. Fett tracked the pilot to the abandoned home of Obi-Wan Kenobi, but was bested by him when he suddenly brandished a lightsaber and escaped. Fett only returned to Vader with a name: Skywalker.

Years after Fett’s first job for Vader, he was hired again to find the Millennium Falcon as it fled from the Hoth system. Fett tracked the ship to Cloud City on Bespin where Vader forced the city’s administrator, Lando Calrissian, to hand over Han Solo, Leia Organa, Chewbacca, and C-3PO into his custody. Solo was frozen in carbonite and given to Fett to take to Jabba the Hutt.

A year later, Solo’s friends infiltrated Jabba’s palace and hatched a plan to free him from the gangster’s clutches. In a battle over the Great Pit of Carkoon, Han Solo accidently triggered Fett’s jetpack and sent him into the mouth of the Sarlacc.

What about Boba Fett in the Expanded Universe?

Boba Fett’s early years in the EU are nearly identical to those in the current continuity. After leaving Republic incarceration during the Clone Wars and following in his father’s footsteps as a bounty hunter, Fett was on the run but managed to find work with Jabba the Hutt chasing bounties. His work often had him brush against battles in the Clone Wars, one instance of which had him stranded on a planet with Anakin Skywalker as they both worked to repair Fett’s ship. 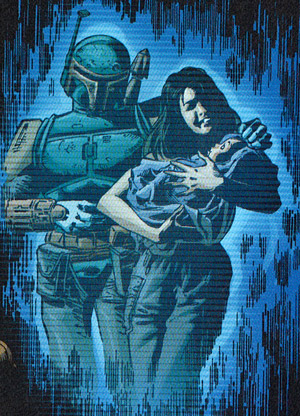 After the formation of the Empire, Fett rose in notoriety. 16 years before the Battle of Yavin, Fett met a fellow bounty hunter named Sintas Vel. The two married and had a daughter, Ailyn Vel. Unfortunately, Fett’s professional life strained his attempts to be a husband and father. Sintas and Fett eventually split apart and Fett devoted himself entirely to his trade.

Over the next few years, Fett’s exploits grew to legendary status, taking higher profile jobs from Jabba the Hutt and even missions on behalf of Darth Vader himself. Five years before the Battle of Yavin, Fett took a bounty on Han Solo, who was wanted by the Besadii Hutts. Just as Fett cornered Solo, Lando Calrissian turned the tables on the bounty hunter and the pair escaped. After failing to apprehend Solo a second time, a rivalry between the two began.

For the next few years, Fett pulled more infamous jobs including investigating a conspiracy around the House of Dooku, hunting traitors to the crime syndicate Black Sun, and even a job for Grand Moff Tarkin hunting Han Solo for deserting the Imperial Navy. The Tarkin job put Fett in a direct confrontation with Vader, who sought Solo for his own reasons . 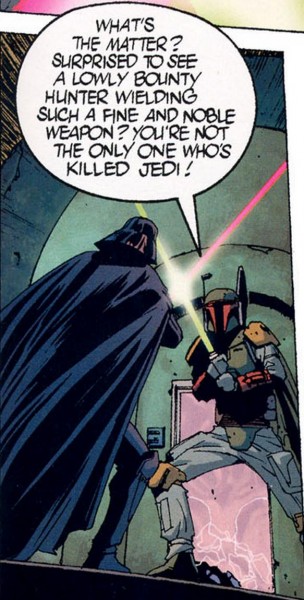 Vader and Fett dueled with lightsabers and though Fett was clearly outmatched… he managed to escape with his life. The duel did not affect their professional relationship. In fact, Vader himself hired Fett for several more jobs for the Empire over the next few years, including tracking Han Solo to Bespin following the Battle of Hoth. Finally there, Solo was frozen in carbonite and given to Fett so he collect the bounty Jabba the Hutt had put on the smuggler’s head. 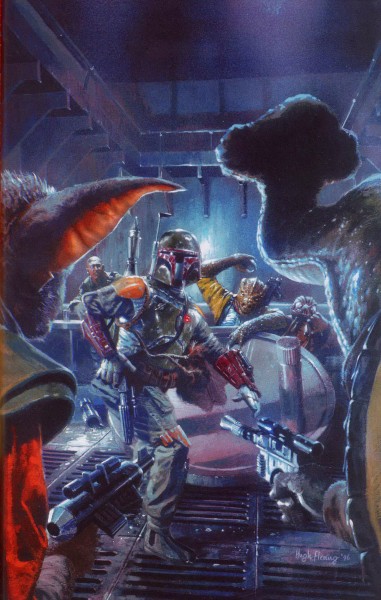 With such a valuable bounty as Solo on board his ship, Fett became a target for Rebel cells and bounty hunters alike on his way to Tatooine. After assaults from multiple colleagues including Bossk, Zuckuss, 4-LOM and IG-88 and the pursuit of the Millennium Falcon on Gall, Fett managed to reach Jabba and collect his reward.

After Luke Skywalker, Leia Organa, and Lando Calrissian rescued Han Solo from Jabba, Fett fell into the Sarlacc. However, he managed to escape the creature and partnered with the fellow bounty hunter Dengar. The two became close friends, with Fett even serving as best man. It was during this time that Fett lost Slave 1 during a mission. It would be years before he reacquired his ship, but during that time he would use several replacements including Bossk’s ship, Hound’s Tooth. 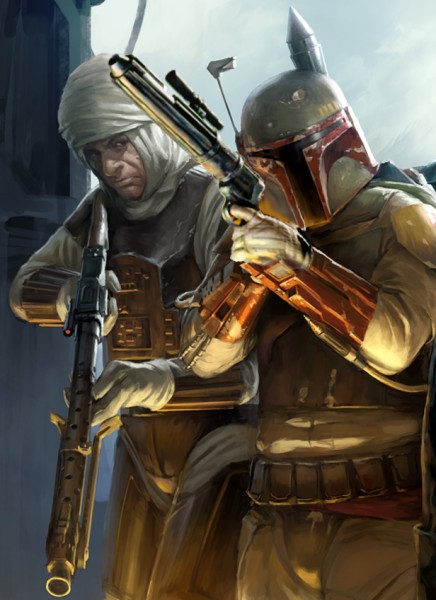 Several years after the Battle of Endor, Dengar and Fett took a bounty on Solo and cornered him on Nar Shaddaa. The pursuit ended terribly, however, with the destruction of Fett’s current vessel (Slave II) and the disintegration of his partnership with Dengar.

Fett went off on his own and began working for Gorga the Hutt. He spent the next few years taking jobs, but the life of a bounty hunter became hard on him. He lost a leg (replacing it with a cybernetic one) and developed cancer. He eventually saw Solo again on the planet Jubliar where Fett first saw him. They agreed to drop their rivalry, as they realized it had led to nothing but destruction. 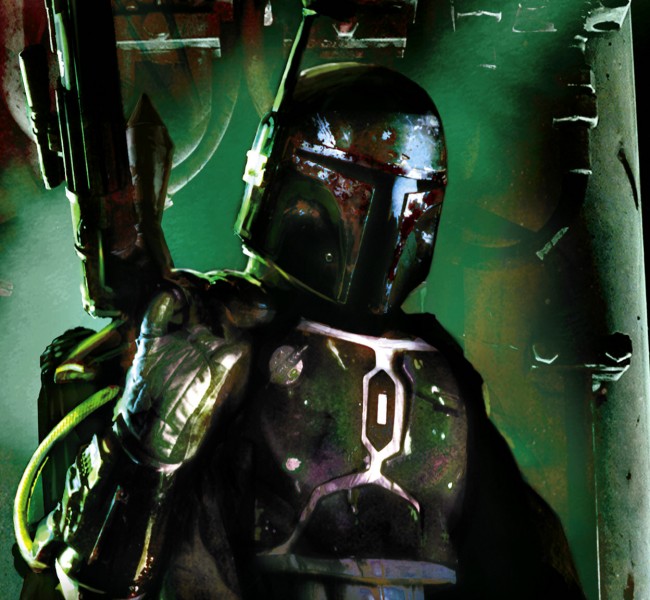 19 years after the Battle of Endor, Fett had taken the mantle of Mandalore: leader of the last Mandalorian warriors. During the Vong Invasion, Fett and his warriors went undercover as a mercenaries for the Vong while passing intelligence to the New Republic. When their cover was blown, they went on the offensive against the Vong as an autonomous group.

After the end of the Vong Invasion, Fett still worked as a bounty hunter but lived a more quite life. He discovered at age 71 that his body was beginning to break down due to clone degradation. He reconnected with his granddaughter and teamed up with Han Solo during the next Galactic Civil War. The two helped stopped Han’s son Jacen, who had fallen to the dark side, from subjugating the galaxy. Fett in particular trained Han’s daughter Jaina in the ways of the Mandalorian warriors to give her the skills she would need to defeat her brother in combat.  Fett may have started as an enemy of the Solos, but now he had become their ally.

Well, it’s a safe bet they’re going to be ditching everything from the post-Return of the Jedi era. While it would be great to have a character in the new films that was a descendent of Fett, the idea of him trying to start a family takes away from the character’s mystique.

With a new film possibly on the way that will focus on Fett, expect for the filmmakers to stick with the original inspiration of the character: The Man With No Name… in space. Sometimes less is more, which the Prequel Trilogy demonstrated when fans had a backlash against some of the character’s material from Attack of the Clones.

We’re definitely going to see more of him, but at least for the time being don’t expect to have the same level of detail we saw in the original EU.

While we’re waiting for more post-Return of the Jedi information, check out our previous entry of Canon Catch-Up about Tie Fighters.

Aaron Edwards is a Los Angeles based screenwriter and filmmaker. On one faithful night when he was five, he sneaked out of his room and watched Aliens on cable. Soon after, he fell in love with storytelling and has been a big ol' nerd ever since. You can follow him on twitter @aaronmedward
You might also like
A New HopeAttack of the ClonesReturn of the JediMoviesFeatures