Movies
5
previous article
World War Z Sequel Has a Release Date: What Could It Be About?
next article
Marvel and George Romero Bringing Zombie Show to TV Based on Empire of the Dead

So, what’s the deal with Chewbacca in the current continuity?

Chewbacca is a Wookie from the forest world of Kashyyyk who found himself captured by Trandoshan trophy hunters during the Clone Wars. With the help of Jedi padawan Ahsoka Tano, he managed to escape captivity and return home soon after, where he fought under Jedi General Yoda in one of the last battles of the Clone Wars. When Order 66 was initiated, Chewbacca helped Yoda escape death at the hands of his own clone troopers.

Following the Empire‘s rise to power, Chewbacca was sent to work as a slave in the spice mines of Kessel. After an unknown period of time, he managed to leave Kessel and become co-pilot of the Millennium Falcon with smuggler Han Solo. Unfortunately, on a run for Jabba the Hutt their ship was boarded and they lost their cargo which incurred a large debt with the gangster.

A short time after, Chewbacca and Han took on Obi-Wan Kenobi and Luke Skywalker as passengers to Alderaan to work off their debt. Instead, they were taken prisoner aboard the Death Star. Together they rescued the captive Princess Leia and escaped with the station’s blueprints. They delivered the blueprints to the Rebellion, who managed to destroy it during the Battle of Yavin.

Weeks after the battle, Chewbacca and Han joined the Rebellion and assisted them in the destruction of the Empire’s Weapons Factory Alpha.

Three years later, the Rebels had been driven back to Echo Base on Hoth. Because of a run in with a bounty hunter on Ord Mantell, Han ordered Chewbacca to make repairs to the Falcon so they could get their affairs in order with Jabba the Hutt. The Empire attacked the base, however, and they were forced to flee early with Princess Leia and C-3P0 and were heavily pursued by Darth Vader’s fleet. They took refuge at Cloud City on Bespin, where the Empire caught up with them. All but Han managed to escape, having been frozen in carbonite and taken by Boba Fett to Jabba the Hutt.

A year later, Chewbacca assisted Leia, Lando Calrissian, and Luke in infiltrating Jabba’s palace on Tatooine and rescuing Han. Shortly after, he participated with them in the Battle of Endor, which led to the destruction of the second Death Star and the deaths of Darth Vader and Emperor Palpatine.

Approximately 30 years after the Battle of Endor, Chewbacca is still partnered with Han.

What about Chewbacca in the Expanded Universe?

In the old EU, Chewbacca was born two hundred years before the Battle of Yavin on Kashyyyk. He braved the dangers of the Shadowlands, the dark and perilous ground of Kashyyyk’s vast forest, but mostly lived with his family in the planet’s capitol city of Rwookrrorro. 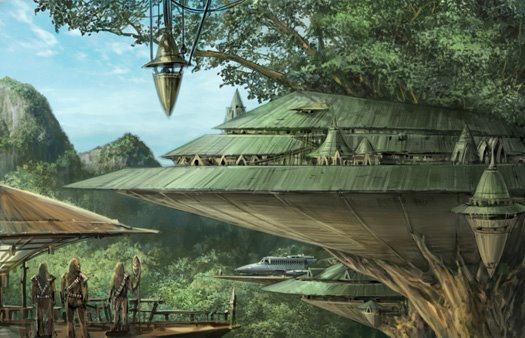 As with current canon, Chewbacca was captured by Trandoshan hunters and escaped. He also fought with Yoda and helped him escape in the wake of Order 66. He also did all he could to help other stray Jedi he came across escape the clutches of the newly formed Empire. 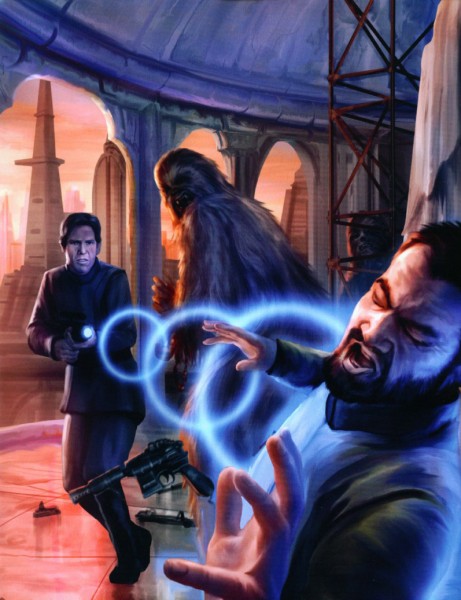 Chewbacca was eventually captured by the Empire and turned into a slave, but was freed by an Imperial pilot named Han Solo who took pity on him. Han left the Empire and Chewbacca went with him, as Han’s actions had incurred a “life debt” from Chewbacca. The two smuggled for years and had many misadventures. As with current continuity, they eventually joined the Rebellion and helped destroy the first Death Star.

Over the next three years, Chewbacca encouraged the reluctant Han Solo to stay with the Rebellion. They took on pirates, created an elite Rebel fighting force named Renegade Squadron, and flew many odd jobs for the heads of the Rebel Alliance until the events of the Battle of Hoth and Han’s abduction at the hands of Boba Fett.

In the year between Han’s kidnapping and rescue, Chewbacca partnered up with Lando and Leia, helping the Rebels on several missions including an attempt with Rogue Squadron to rescue Han from Boba Fett on the world of Gall. Boba Fett managed to escape, however, and delivered Han to Jabba the Hutt. To assist Leia on one mission, he took on the persona of a bounty hunter to compliment Leia’s Boushh character.

Eventually, they were able to successfully rescue Han. Together, they won the Battle of Endor.

During the formative years of the New Republic, Chewbacca stayed with his friends as their adventures built a new government that whittled down the reign of the Imperial Remnant. He fought in the Thrawn Conflict, was stranded on Kessel that led to an incident with the Imperial super weapon called “The Sun Crusher,” and helped Luke Skywalker scour the galaxy for Force sensitive individuals to train into a new generation of Jedi.

Chewbacca also acted as protector to Han and Leia’s three children Jacen, Jaina, and Anakin. 21 years after the Battle of Endor, he continued to protect them. In the first wave of the Yuuzhan Vong invasion, Chewbacca died saving Anakin Solo. Even after his death, his friends honored and remembered him as they fought for freedom across the galaxy. 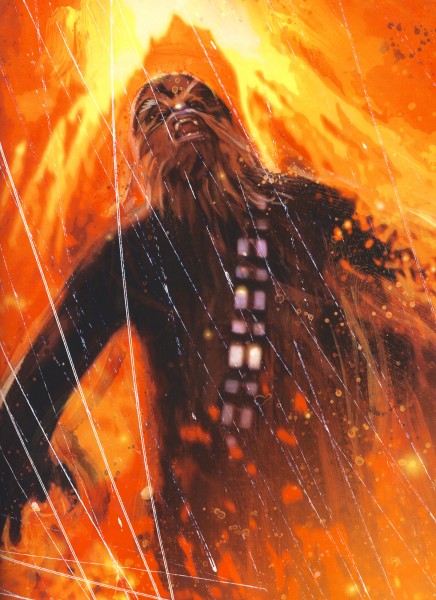 Well, first and foremost we know that Chewbacca is now alive years after he died in the old continuity, which is sure to please many fans. While his life debt to Han Solo is technically no longer canon, we know that his loyalty to his friend is absolute. Therefore, unless they kill him again it’s pretty much impossible for him to go off on his own.

Chewbacca being charged with the protection of Han’s children may also come into play if our suspicions are confirmed. We know that in both continuities, it is likely that Chewbacca and Han continue to fight the Empire after the Battle of Endor. However, we don’t know if Han Solo and Chewbacca remain allied with the Rebels, as by the time of The Force Awakens they appear to have become a much different entity than the EU’s New Republic.

While we’re waiting for more post-Return of the Jedi information, check out our previous entry of Canon Catch-Up about Rogue Squadron.

Aaron Edwards is a Los Angeles based screenwriter and filmmaker. On one faithful night when he was five, he sneaked out of his room and watched Aliens on cable. Soon after, he fell in love with storytelling and has been a big ol' nerd ever since. You can follow him on twitter @aaronmedward
You might also like
A New HopeReturn of the JediRevenge of the SithMoviesFeatures