Gaming
0
previous article
Need a Last Minute Cosplay? This Rocket Raccoon Tank Top Comes Complete with Ears and a Tail
next article
This Smartphone Can Recharge in Under 2 Minutes (How Is This Real Life)

That’s at least according to Goofy voice actor Bill Farmer, who revealed on Twitter that his work on the game is done, and that it would be arriving “later this year.” 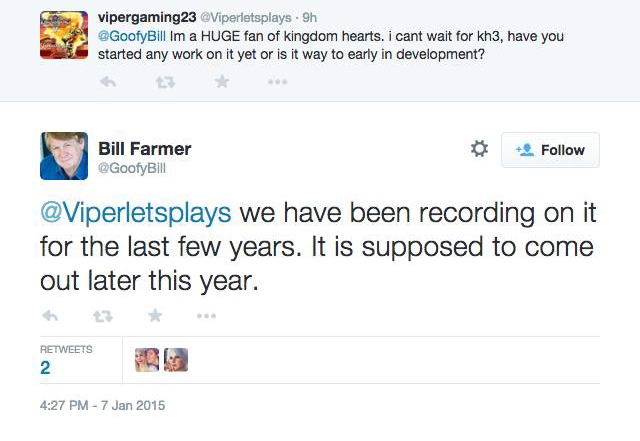 Soon after Farmer’s tweet, Square Enix was quick to jump in with a denial. Well, maybe not a straight denial, but here’s what they had to say:

Farmer quickly deleted his own tweet, before issuing this bit of damage control.

So What’s The Deal?

The most likely story is that Kingdom Hearts III is in fact coming out this year, or if not, very soon after. What most likely happened is that Square Enix was hoping for a big reveal at say, E3 2015. If this is the case, Farmer jumped the gun a little, and spoiled the surprise.

Games like Kingdom Hearts often make for huge, marquee announcements at E3, and if Sony or Microsoft had tapped Square to present the news at their press conference, obviously they don’t want the surprise to be leaked early.

The other side of the coin is that perhaps the game isn’t coming out this year. It’s very possible that this was the original plan, and that up until the point where Bill Farmer was involved, it was still on track.

Complications happen though, and it’s not hard to fathom that after Farmer completed his voice acting work, that things behind-the-scenes necessitated yet another delay.

So basically, it’s all up in the air at the moment, as Square Enix has yet to commit to any sort of release date. So while I still think it’s likely that the game will see a 2015 release date, don’t yell at me too much if that’s not the case.

Kingdoms Hearts Will Get One More HD Collection Ahead of KHIII

by Jeff Rush on September 17, 2015
Kingdom Hearts will be getting a third HD collection, titled Kingdom Hearts HD 2.8: Final Chapter Prologue. Square Enix has clearly realized they can name these things whatever they want, and are just rolling with it.

Which Worlds Will Kingdom Hearts III Include? [Updated with Big Hero 6]

by Overmind on August 17, 2015
Which Disney worlds will we be visiting in Kingdom Hearts III?