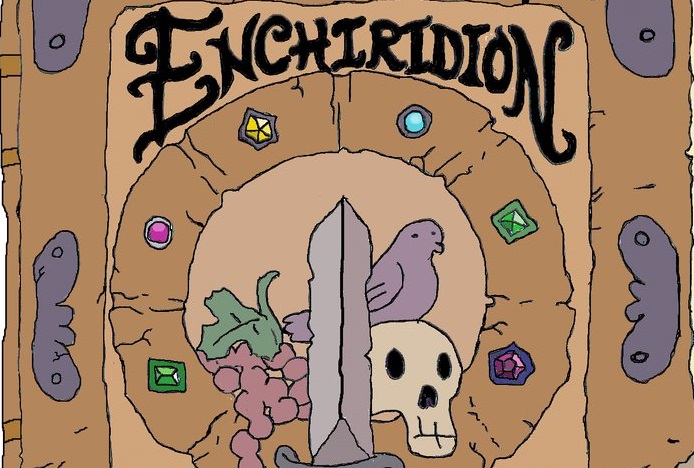 Adventure Time: The Enchiridion is another entry in Cartoon Network’s series of Adventure Time episode bundles, alongside DVDs like Jake vs. Me-Mow and The Suitor. The loose theme this time around is the Enchiridion, the mysterious handbook for adventurers-in-training carried by our protagonist boy hero, Finn the Human. 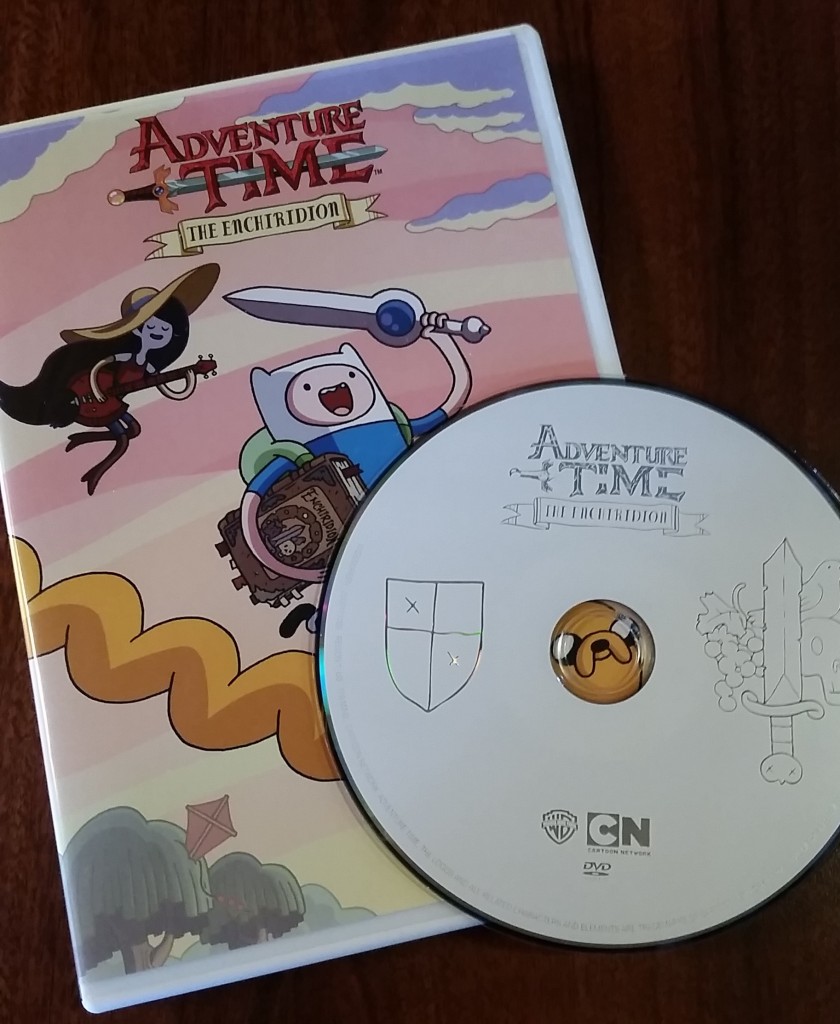 So is this for die-hards or newcomers?

The collected-episodes DVDs shouldn’t be confused with the Season collections, which are obviously far more suitable for newcomers of the series who actually want to see these episodes in order. On the other hand, these collection DVDs are more for people who don’t need to own every single episode ever, but would rather have a ‘Best Of’ kinda thing, which The Enchiridion functions best as. The episodes are drawn from disparate seasons, in un-chronological order, all with a focus on the Enchiridion.

Wait, what the heck’s an Enchiridion again?

Funny enough, within the series the handbook is touted as a tome of essential hero-knowledge and it does help Finn out in a handful of instances, such as pointing out the healing powers of cyclops tears and such, but for most of the series it’s been more of a Macguffin. Finn earns the Enchiridion in the early titular episode, then barely uses it before he *spoiler alert* loses it to the Lich-possessed snail. Hence, it’s easy to forget that it’s an artifact deeply rooted in the series’ lore: for example, who remembers that the discoverer of the Enchiridion was originally Simon Petrikov, the Ice King’s forgotten human alter-ego, who unearthed it alongside the Ice Crown? 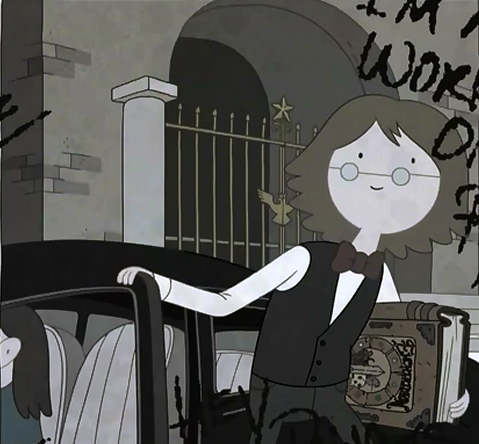 And again, in case you forgot, the final appearance of the Enchiridion was in “The Lich,” wherein the Lich (in possession of Billy’s body) revealed that the book could transport a user between the many universes and dimensions beyond Ooo. By activating the book with the power of the stolen princess gems, the Lich was able to open a portal to Prismo the Wishmaster’s dimension, the hub of the multiverse.

What episodes are included, and why?

For the most part, these DVD collected episodes ride their themes loose and fast, with a handful of obviously-related episodes, and a handful of, for lack of a better term, ‘filler.’ Since the theme is the Enchiridion, the creators have gathered a pretty representative playlist of episodes revolving around heroism, or times where Finn came close to straying from the path: there’s “The Enchiridion” of course, the gender-smart “Henchmen,” the Guantanamo Bay-related “What Have You Done?”, and “Dungeon Train.” But surprisingly, they’ve also included some of the more esoteric, spiritual journey-sort of episodes like “Astral Plane” and “Billy’s Bucket List.”

On the filler side, there are oddities like “Web Weirdos,” “James II,” and “Root Beer Guy.” Puzzling, but all great episodes nonetheless. 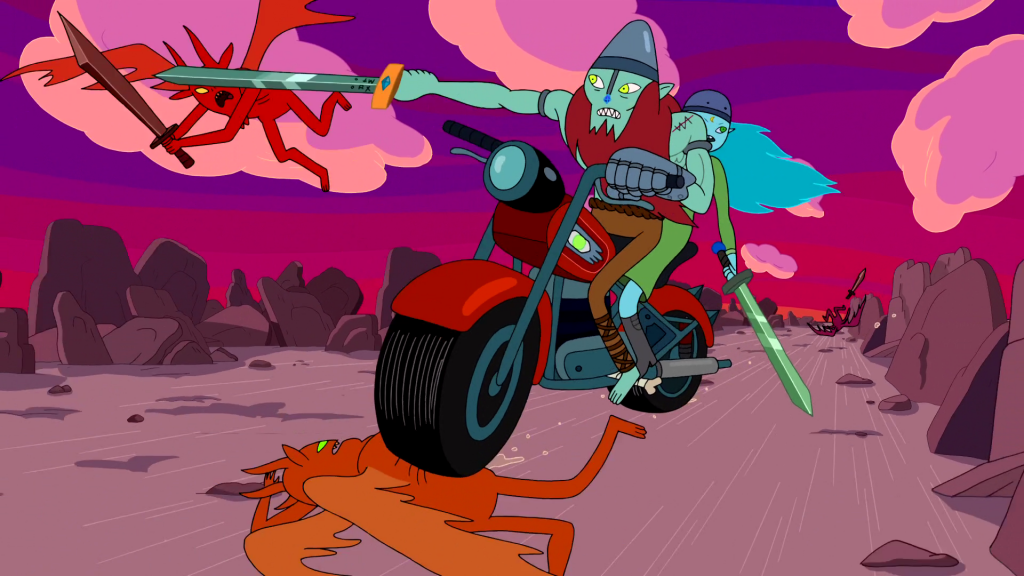 Surprisingly, the DVD doesn’t come packaged with any extra goodies, inside or out. Certain previous collections, like Jake vs. Me-Mow and Jake the Dad come with a bonus Finn or Jake Hat, or fold into a BMO box or something cool like that. Some past collections even had some trivia-style or behind-the-scenes special features, but The Enchiridion lacks these extra bells and whistles.

As far as total package value, it certainly would’ve been icing on the cake to get, I don’t know, an Enchiridion bookmark or book cover to sweeten the deal; and in the absence of the extra goodies, it’s hard to recommend this to collectors looking for obscure loot. But for anyone who wants to have a smattering of quality episodes on hand, The Enchiridion certainly gets the job done. 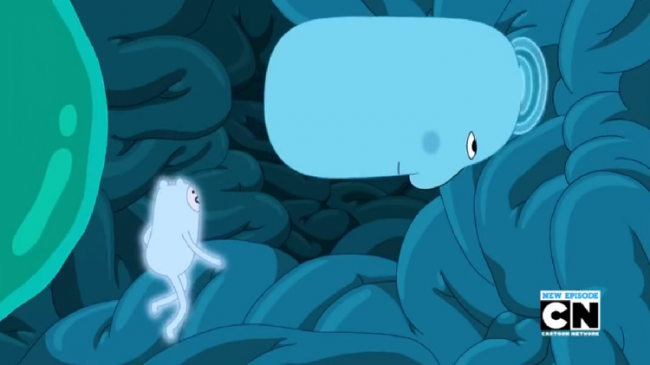 To wax poetic on some highlight episodes, “Astral Plane” is some of the series’ most poignant visual storytelling, a drift-along, stream-of-conscious meditation on human suffering and meaning; and “Ocarina” tackles economic class differences with elegant simplicity and a non-judgmental conclusion. You’re getting great episodes from the distant past to the not-so-distant past, and watching them back to back is a blast from the past for longtime fans, and a good sampler for neophytes.