20 Jurassic World Easter Eggs and Nods to the Original Trilogy

Considering how standalone Jurassic World felt, it’s surprising how many references to the previous films Colin Trevorrow and crew managed to cram in there.

From the obvious, story-centric stuff, to the much more subtle in-jokes and behind-the-scenes trivia, here are 20 Jurassic World easter eggs to look out for on your next viewing. 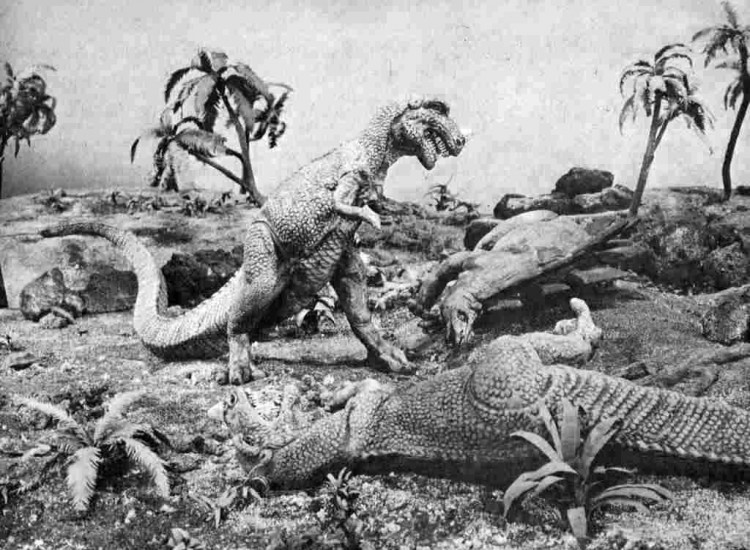 Ty Simpkins’ character is introduced while taking a gander at some dinosaurs through an old View-Master toy (did you know they still make those?). The two scenes he’s looking at are particularly relevant. The first is a real View-Master reel called “Prehistoric Animals,” while the second is a frame from The Animal World, a 1950s film that was one of the first uses of stop-motion photography for dinosaur special effects. 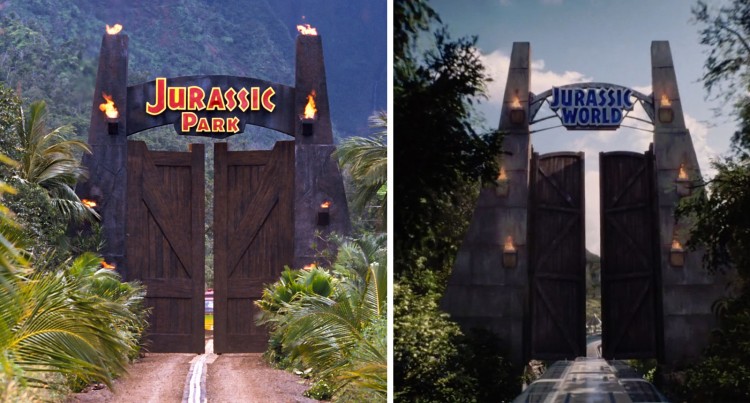 The gates of Jurassic World have gotten a modern face-lift since the days of the original theme park, but according to the monorail’s PA system, they were actually built using salvaged wood from that first entrance.

Speaking of monorail PA systems, the voice of that automated guide is none other than Brad Bird, who helped Colin Trevorrow get the job helming Jurassic World. Bird is no stranger to voice-acting, having played the part of Edna Mode in Pixar’s The Incredibles, a film he also directed.

This eatery on the park’s Main Street is named after Stan Winston, the iconic special FX creator who won an Oscar for the visual effects on the original Jurassic Park. 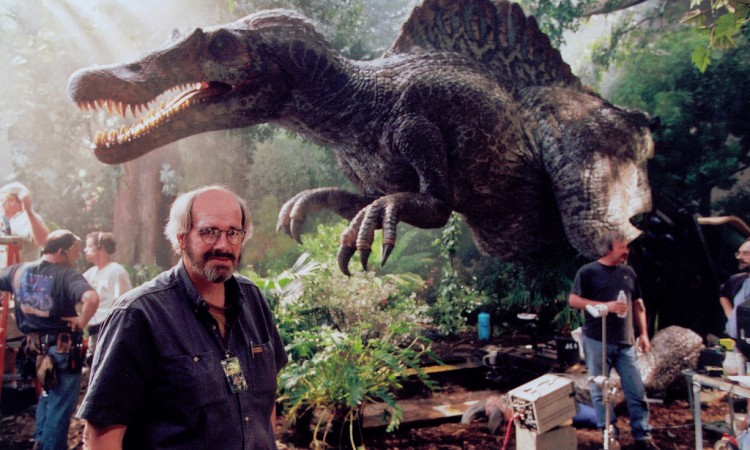 Paleontologist Jack Horner is one of the top dinosaur experts in the world, so fittingly, he’s served as a technical adviser on every single Jurassic Park movie. He even gets a brief cameo in Jurassic World, as one of the employees working at the raptor paddock. 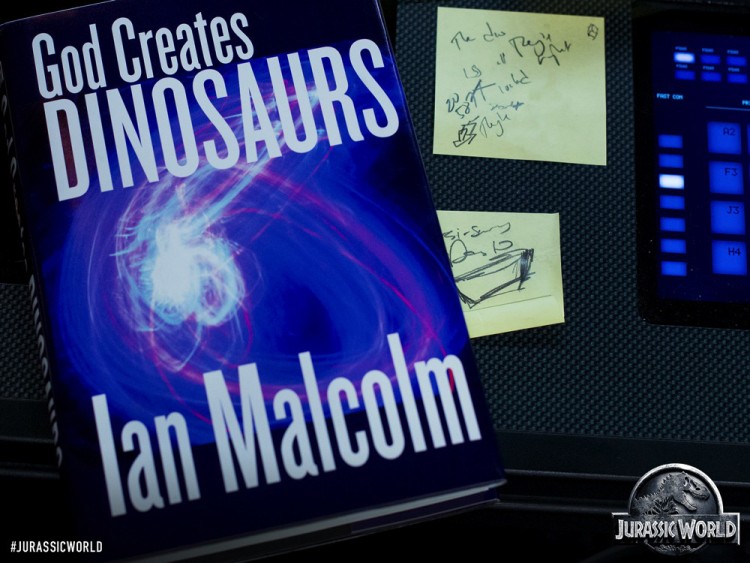 Jeff Goldblum’s character from the first two movies doesn’t appear in this one, but the book he wrote in between those adventures does. Zara, Claire’s assistant/emergency babysitter, is seen reading it early on; and it pops up once again on Lowery Cruthers’ (Jake Johnson’s character) desk. 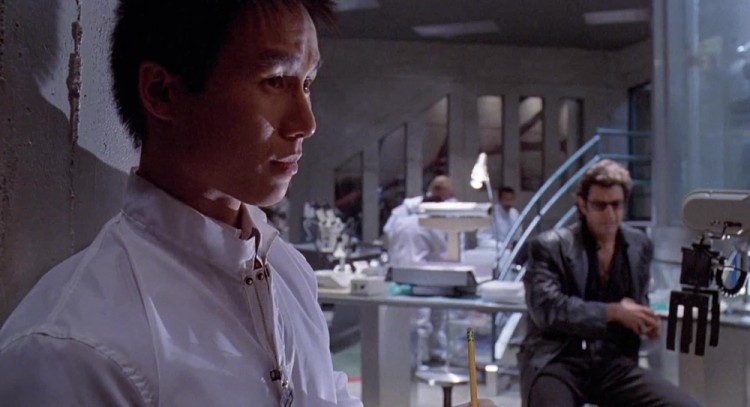 B.D. Wong’s Henry Wu is the only character from the first film who returns for Jurassic World. In both movies, he’s the scientist in charge of creating the dinosaurs (he apparently didn’t learn his lesson). A few shots of his lab also reveal that they’e still relying on mosquitoes preserved in fossilized amber to extract their dino-DNA. 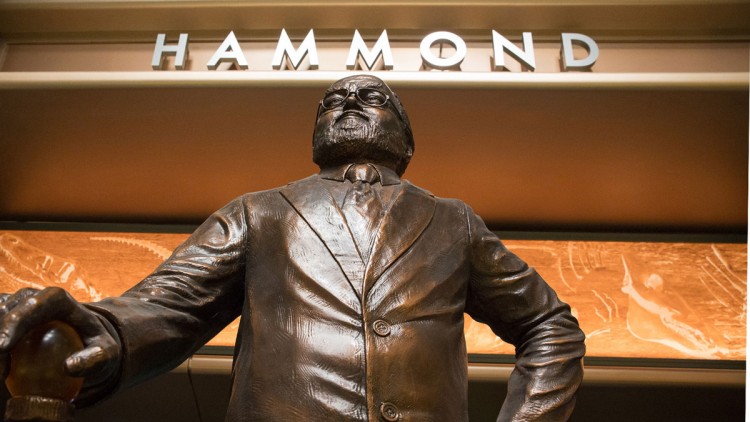 The creator of the original Jurassic Park is no longer with us (in real life actor Richard Attenborough passed away in 2014), but he’s been memorialized in the Samsung Innovation Center, complete with his fossilized amber cane from the first movie. He’s also directly name-dropped a few times during the movie, with Simon Masrani stating that Hammond entrusted his legacy to him before his death.

The stampeding Gallimimus dinosaurs are a ride now, but they were a whole lot scarier in the original park when Alan Grant and the kids were nearly trampled by them. This particular species also happens to be very important to the Jurassic Park franchise, as they were featured in two ILM visual effects tests that convinced Steven Spielberg to digitally create the dinosaurs, rather than relying on traditional stop-motion. 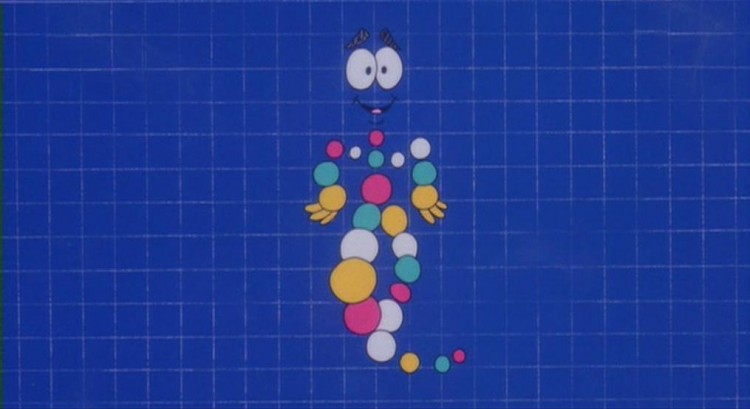 Mr. DNA, the park mascot from the first movie, appears a few times in Jurassic World. He also happens to be voiced by director Colin Trevorrow himself.

11. Where Have I Seen That Shark Before? 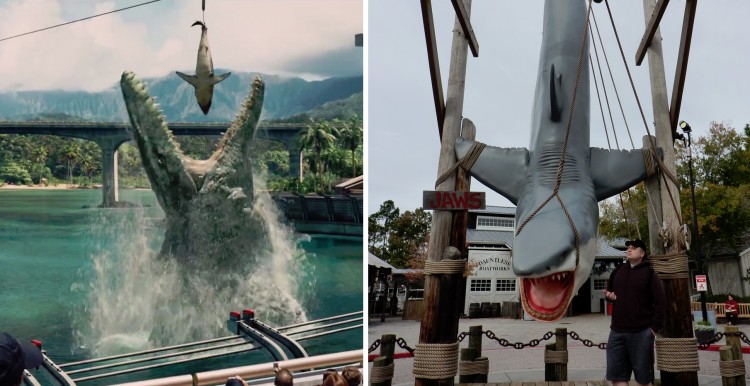 The mossasaurus is big enough to make a great white shark seem like an appetizer. According to director Colin Trevorrow, this was an intentional reference to Steven Spielberg’s Jaws, paying homage to how much it laid the foundation for monster movies like Jurassic World. The imagery of the shark hanging upside down even resembles the iconic entrance to the old Jaws ride at the Universal Studios theme parks. 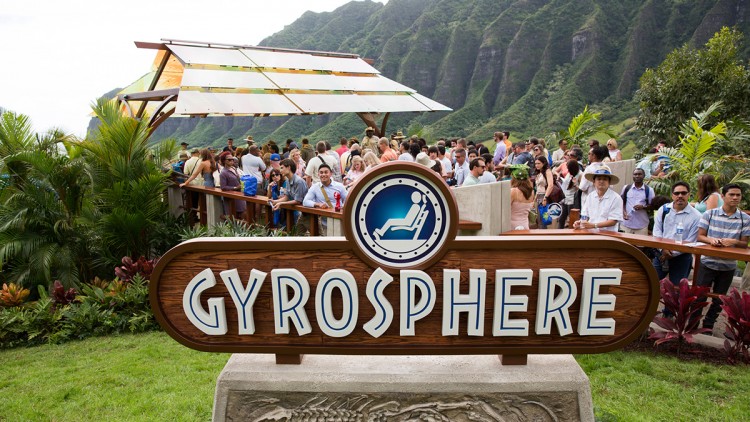 Speaking of theme parks, Jimmy Fallon makes a brief cameo as himself, narrating the Gyrosphere tour. That might seem really random, unless you’ve paid a visit to Universal Studios Hollywood in the past few years, where Fallon hosts the tram tour. 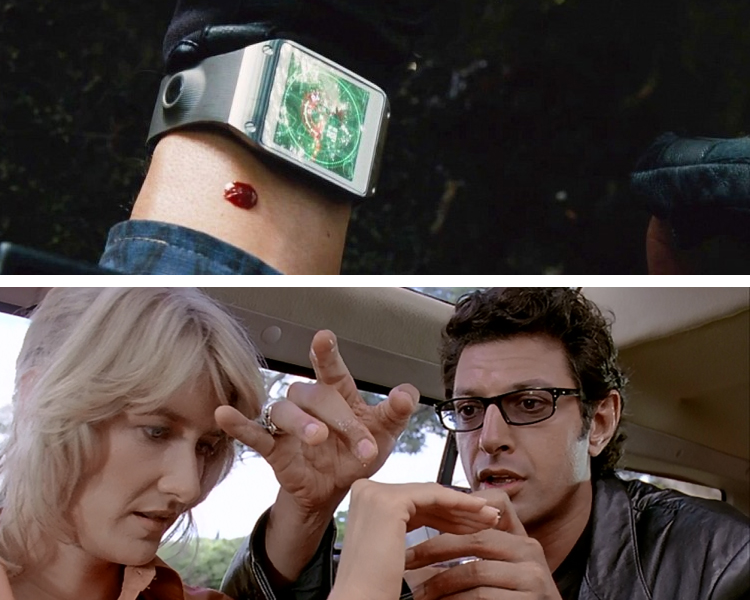 When two drops of blood fall on the park security guard’s arm, one rolls one way while the second rolls the other way. This is a slightly more morbid version of Iam Malcom’s demonstration of Chaos Theory from the original movie (he used water, much more sanitary). 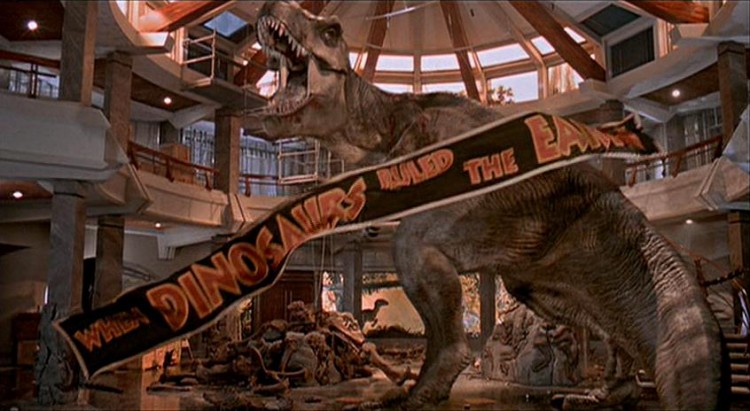 The scene where Gray and Zach take refuge in the ruins of the old Jurassic Park Visitor Center features a ton of little nods to the first movie. The pair stumble across the “When Dinosaurs Ruled the Earth” banner that fell during the one of the last scenes in that movie, which Zach turns into a torch using a bone from the T. rex skeleton display, while Gray picks up a pair of night-vision goggles, the same kind worn in the original movie. 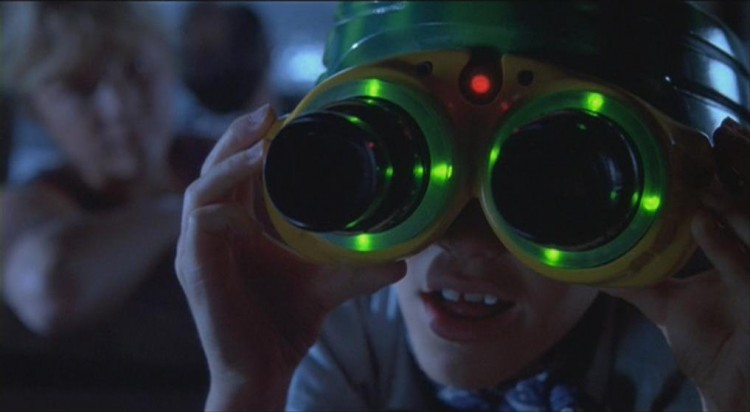 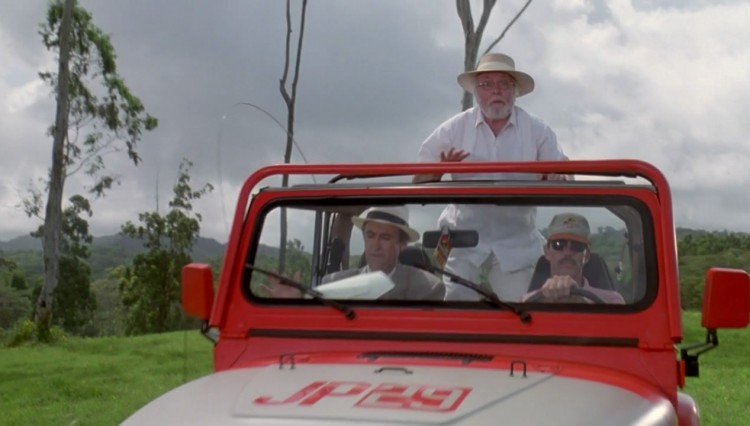 Eagle-eyed fans noticed that the Jurassic Park jeep that Zach and Gray fix isn’t just any old car. It’s actually JP29, the same one that John Hammond and Donald Genarro rode in during the first movie. 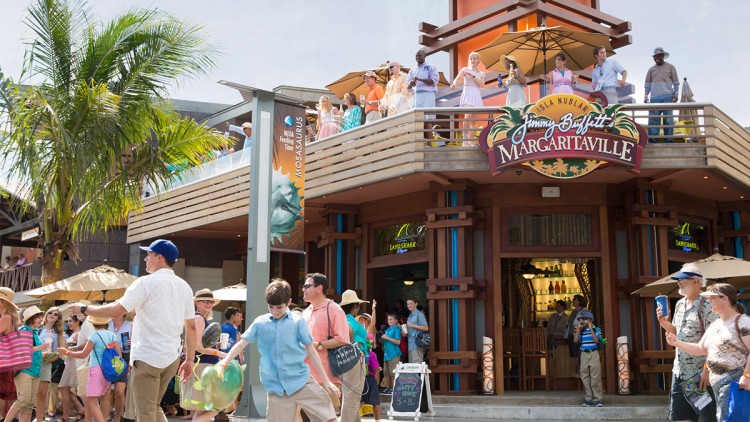 During the scene where the Pteranadons and Dimorphodons attack Main Street, you can briefly see a man running away from the dinosaurs while also trying not to spill his drinks. That isn’t just any random tourist, that’s Jimmy Buffet, the owner of the Margaritaville chain of restaurants (one of which is located in the Jurassic World park). 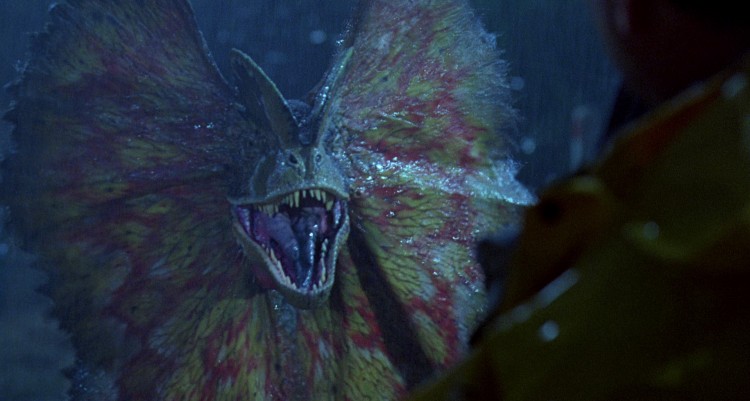 A hologram of the Dilophosaurus in the Innovation Center was cleverly used to distract a Velociraptor. Fans may remember this species of poison-spitting dinosaur from the original film as the one that killed Dennis Nedry. 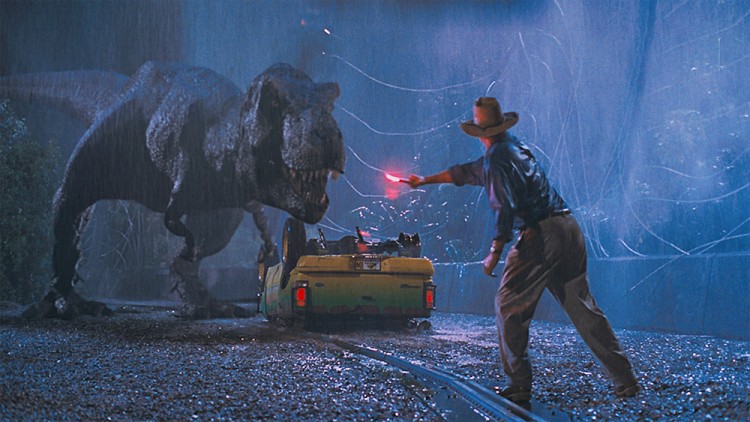 The red flares used to lure the T. rex (once as part of an attraction, and again by Claire at the end of the movie) are a direct reference to an iconic scene in Jurassic Park, where Ian Malcom and Alan Grant use emergency flares to try and distract the dinosaur. Their return actually makes a lot of story sense once you consider…

This seems a little implausible, but according to Colin Trevorrow and the movie’s official tie-in website, the T. rex that’s featured in Jurassic World is supposed to be the exact same one from the original movie. If you look closely, you can even see that it already has some scars from when it fought those raptors in the old Visitors Center. Considering it’s been 22 years since the events of Jurassic Park, that is one old dinosaur. One thing hasn’t changed though, he still has a taste for goat. 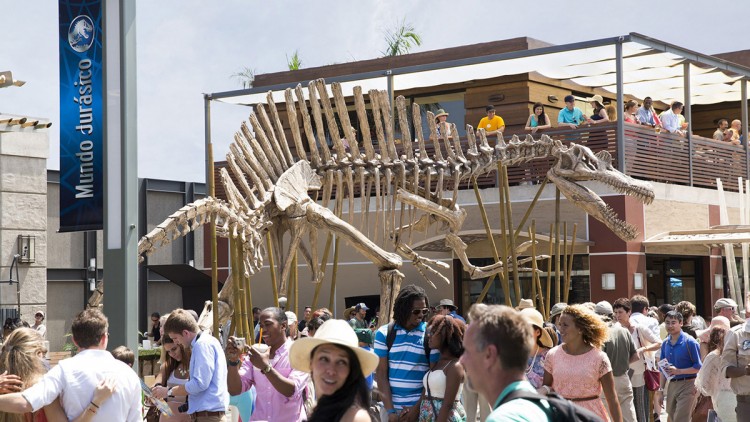 Jurassic Park III wasn’t exactly universally loved, but the Spinosaurus was still pretty cool to look at. It apparently didn’t warrant an attraction at the new park, but its bones are displayed on Main Street. The climax of the film even sees the T. rex smashing it to pieces on its way to fight the Indominus Rex, in what’s likely a cheeky little nod to which dinosaur Colin Trevorrow likes best.

All of Stan Lee’s Marvel Cameos So Far: Iron Man Through Age of Ultron [Updated]

by Ryan Matsunaga on October 2, 2015
The Stan Lee cameo is a bonafide Marvel movie tradition. He’s managed to show up in literally every installment of the Cinematic Universe to date, and more than a few Marvel movies by the other studios.

by Ryan Matsunaga on August 31, 2015
Avengers: Age of Ultron was a giant-size set up for future MCU movies, but with the impending release of the Blu-ray, we’re just getting started.