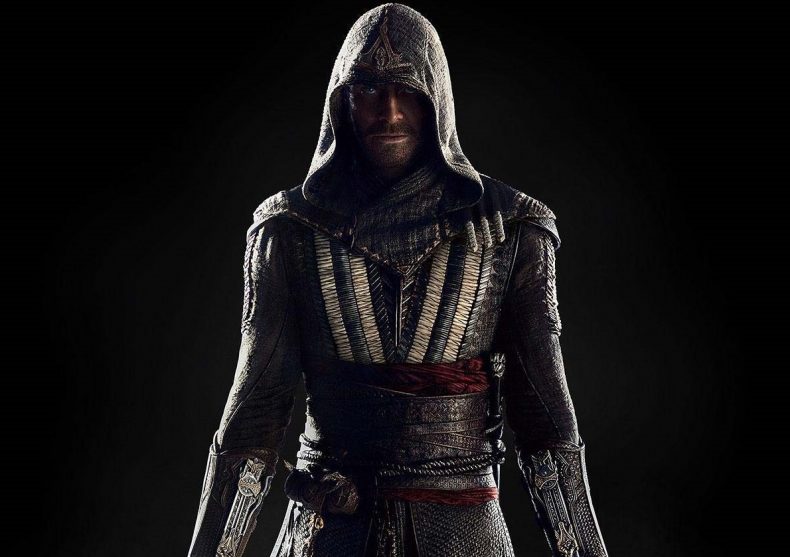 And how does it tie into the game series?

These days, Assassin’s Creed is the video game equivalent of Old Faithful: each installment arrives at about the same time every year and you usually know what to expect from it. You can always find a gruff but ultimately likable protagonist, a superbly detailed open world, historical figures as supporting characters, unnecessary sci-fi back story, and a frustratingly convoluted conspiracy plotline.

That’s all well and good for a game… but what about a movie?

Some info has slipped from between the cracks, with more still to come. We’ve created this handy FAQ to compile everything we know about the film and how it fits in with the games. We’ll be updating it regularly as new information arises.

At the moment, the movie is simply being called Assassin’s Creed. We imagine it’ll stay that way, though it isn’t outside the realm of possibility it could eventually be called something along the lines of Assassin’s Creed: Insert Subtitle Here.

Justin Kurzel is directing. The three officially credited writers are Bill Collage, Adam Cooper, and Michael Lesslie, though we’re sure Jurzel and Michael Fassbender have probably had a hand in shaping the script.

Justin Kurzel is an Australian director who’s been picking up a lot of buzz thanks to his extremely well reviewed adaptation of Macbeth starring Michael Fassbender, which is set for wide release in December.

Michael Fassbender is starring as Callum Lynch. Oscar winners Marion Cotillard (The Dark Knight Rises) and Jeremy Irons (The Lion King) will be joining him.

The word on the street is the historical portion of the film will be taking place in 15th Century Spain, which probably means the bad guys (or, rather, the Templars) will be part of the Spanish Inquisition. The head of the Inquisition was Grand Inquisitor Torquemdada, so we’re expecting him to be the main villain of the piece the same way Rodrigo Borgtia (Pope Alexander VI) was the main antagonist of the game Assassin’s Creed II.

What’s the film’s connection to the games?

It will reportedly take place in the same world as the games, but follow separate characters and events. 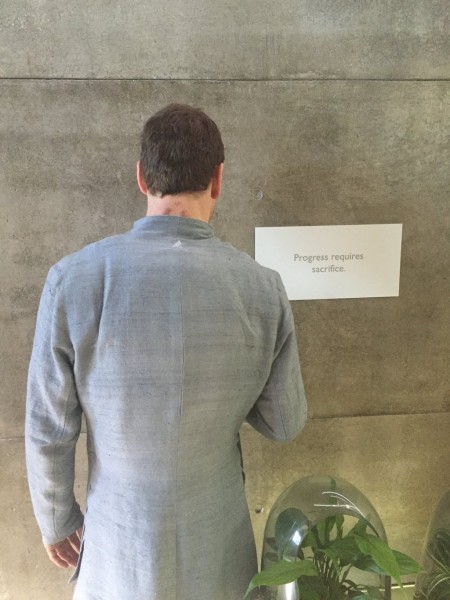 A picture from the set shows Fassbender at what appears to be Abstergo Industries, a corporate front for the Templars in present day. Could it be they’re forcing Lynch to relive ancestral memories the same way they did to Desmond in the first game?

[Update 12/28/15] In an interview with Entertainment Weekly, Michael Fassbender revealed he didn’t play the games when he signed on, but has now:

“I’ve played it since [being offered the job] mainly to get an idea of the physicality of the character. We’re striving to find something special. We believe the whole concept around it is special and want to service that the best we can. The fans are really passionate: very specific and they expect accuracy and historical detail. We’re really trying to capitalize and feed on and enjoy the fun element. We’re working hard to make this something special.”

How do we know if this will be any good?

Well, to be perfectly honest we don’t know for sure. However, there are plenty of aspects regarding the development of the film that give us hope.

First and foremost, Ubisoft is making the film on its own which means it will have total creative control rather than a Hollywood studio. Second, they hired Michael Fassbender to not only star in the film but produce it, which means he’ll be taking an active role behind the camera. Lastly, they hired a fantastic director who has experience with emotional period pieces.

In an interview with Slashfilm, Jean-Julien Baronnet, the CEO of Ubisoft Motion Pictures, described the development process with Fassbender:

“[Michael Fassbender] accepted very quickly. And it was the only actor which we thought was obvious. So we started with the actor, which is incongruous. Even more incongruous, he engaged us with nothing. There was no script, no studio or anything. We told him we were going to build the project together, we have a huge brand and we want to make a make a film with references to feature films like Batman Begins and Blade Runner. That is why we tend to. He was promised that he could work with the writers, we would associate it with all key creative choices.”

Anything else we should know?

We know that Michael Fassbender will be playing both his present day and period characters, as they’ve posted him in his Assassin costume online: 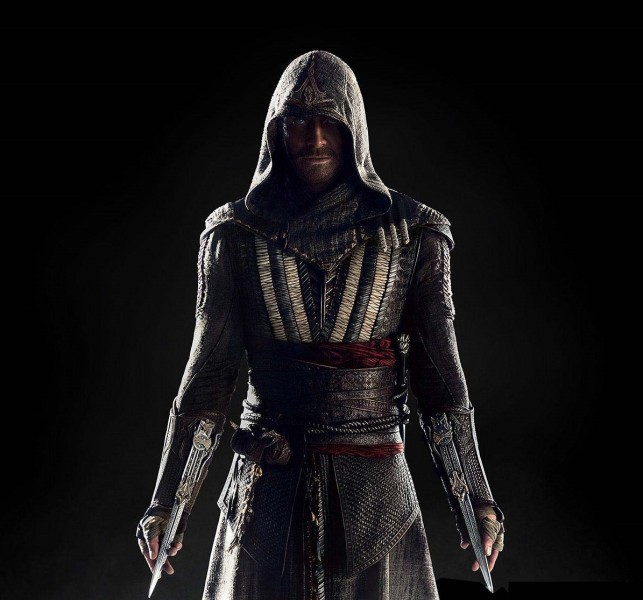 Based on that photo, we can surmise the movie will take a Quantum Leap stance on portraying ancestral memories, unlike the games. Where’s Ezio, Conner, Altair and the rest appeared as themselves instead of Desmond, we’ll be seeing the avatar of Callum instead of his ancestor.

It’s a little disappointing from a diversity standpoint, but when you pay to have Michael Fassbender in your movie you want him in there as much as possible.

[UPDATE 12/23/2015] The viral marketing for the campaign has kicked off. A fake website for Absertgo, the Templar corporation, is now live.

The site leads to a phone number for the company’s CEO, Alan Rikkin, played by Jeremy Irons in the film. Calling it leads to a voice mail that says something is going down on March 25th. Seeing as how that’s the release date of Batman v Superman, we’re guessing that’s when the trailer is coming.

Production is already underway. Some production stills of some swords have been posted on twitter. The swords are definitely Medieval given the prevalent iconography of the cross, confirming the 15th Century setting: 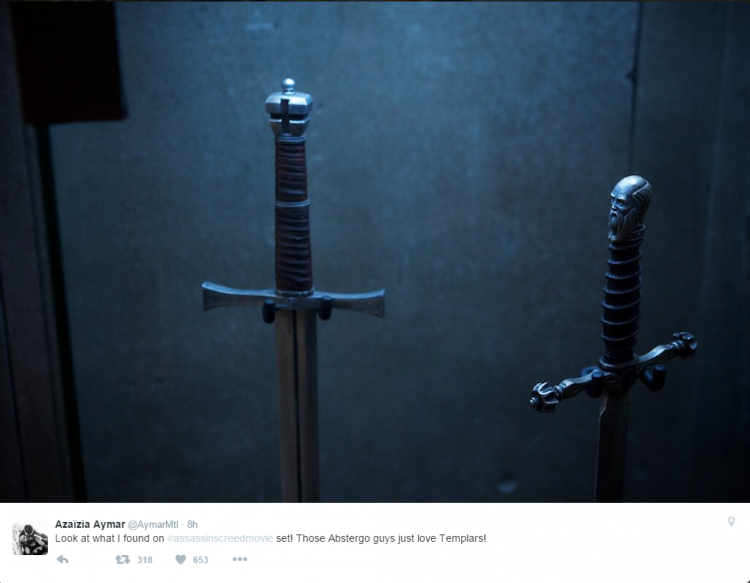 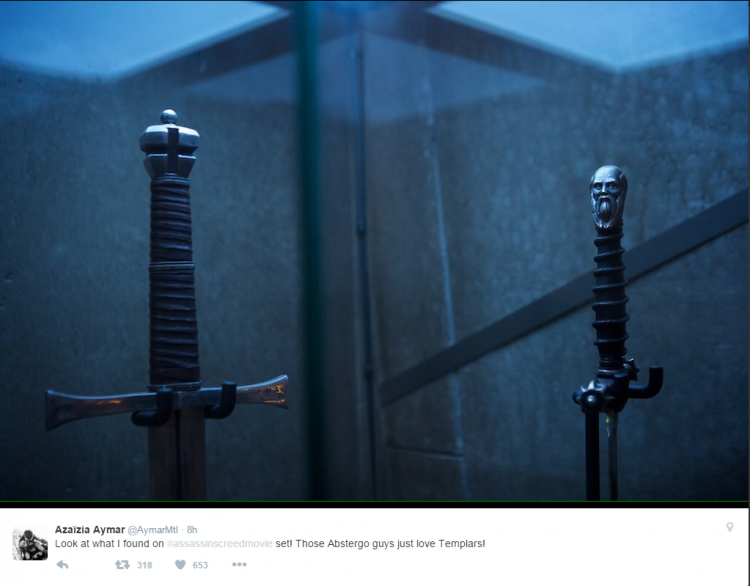 [UPDATE 12/10/15] More set photos from the production’s location shoot have leaked, showing Michael Fassbender and others in costume: 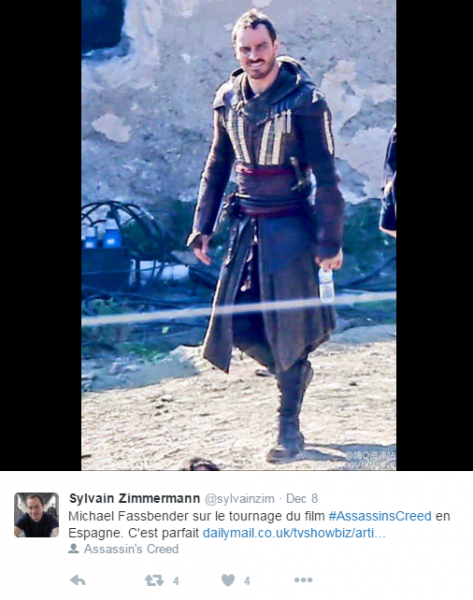 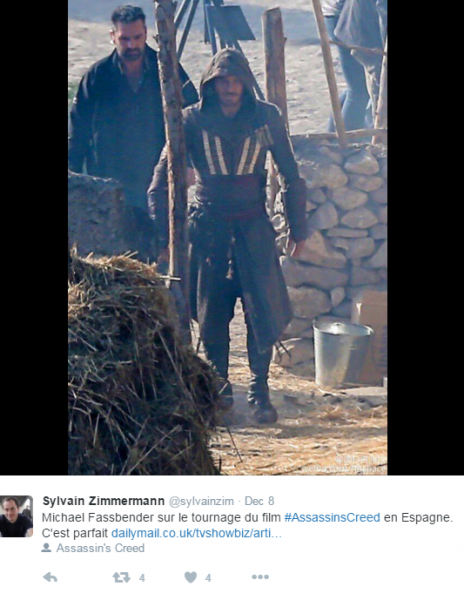 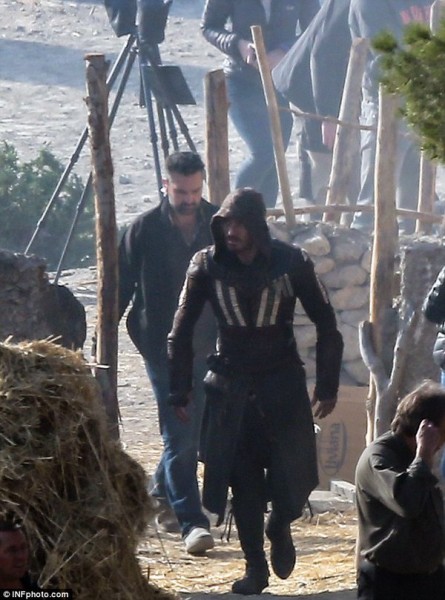 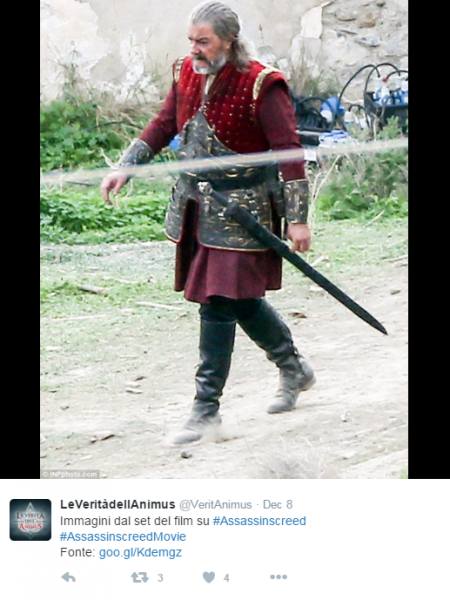 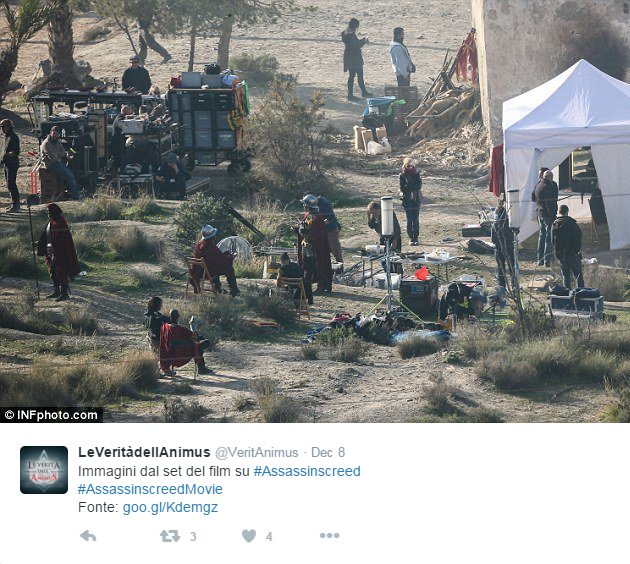 [Update 12/28/15] A new official production still from the film has been released by Entertainment Weekly with Michael Fassbender and Ariane Labed: 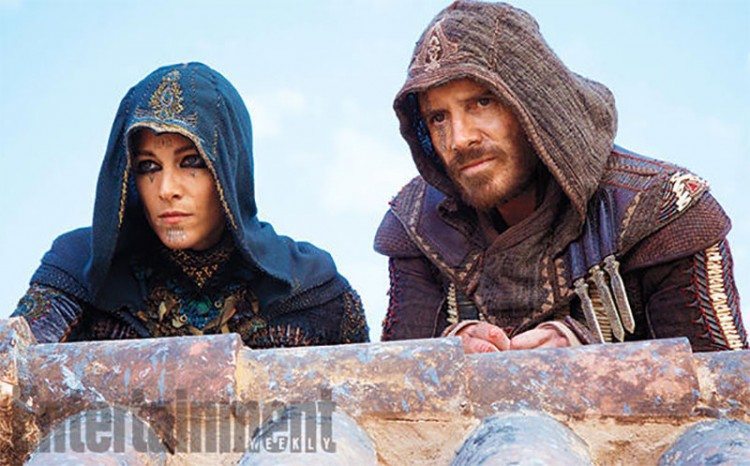 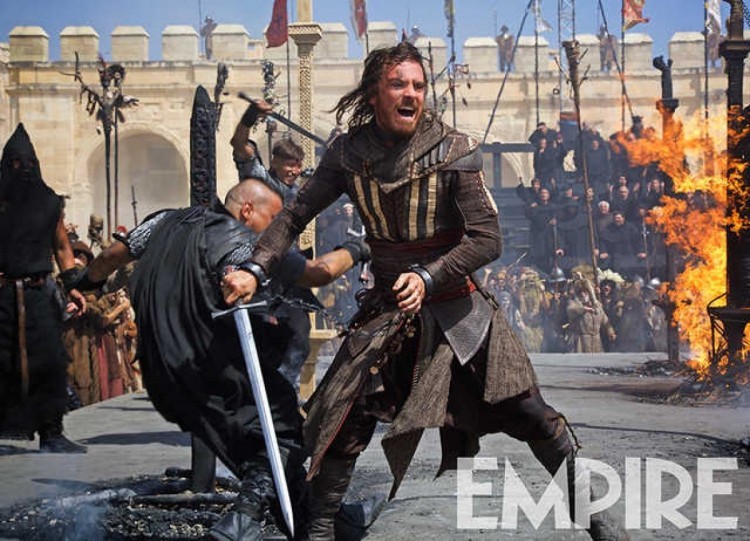 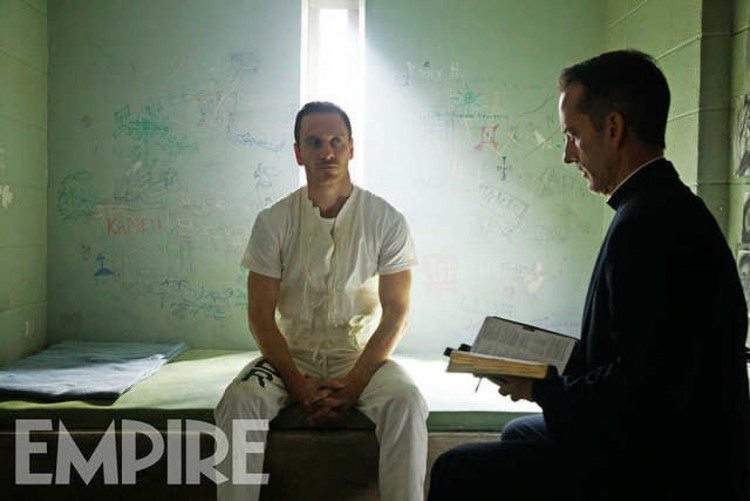 When will it be out?

The film is currently slated for release on December 21st, 2016, five days after Star Wars Rogue One. So, we imagine Assassin’s Creed will be changing its date.

Aaron Edwards is a Los Angeles based screenwriter and filmmaker. On one faithful night when he was five, he sneaked out of his room and watched Aliens on cable. Soon after, he fell in love with storytelling and has been a big ol' nerd ever since. You can follow him on twitter @aaronmedward
You might also like
Assassin's CreedGuidesDCEUMoviesMovie News

by Andy Gordon on December 30, 2015
There’s no word on a trailer yet, but in the meantime, here is our first look at the Assassin’s Creed movie.