007 has had a SPECTRE looming over him his entire life: Christoph Waltz

The new SPECTRE trailer is out, full of teases for amazing sequences and a potentially amazing story that ties together all of Daniel Craig’s Bond films. What stands out to us, however, is that the film feels like it’s trying to return to the classic Connery-era Bond films. We’ll break down all those elements as we analyze the new trailer.

Haven’t seen it? Check it out here before we begin:

Good to go? Let’s delve into this bad boy and see what we can find.

First, we start with the obligatory sweeping city shot to set up a sense of scale. We believe this particular shot is of Mexico City.

Here’s a shot of the Day of the Dead festival the production recreated in painstaking detail for a chase sequence. If you want to see more regarding the filming of the scene, check out this vlog:

Next up we have a woman and a man together in the crowd dressed for the occasion. Either the man is Bond, or someone Bond is hunting.

But judging from the fact that M is chewing Bond out…

… and the fact that Bond seems to be stalking someone from the rooftops, we’re pretty sure the guy in the mask is the target.

Bond carries out an explosive assassination, which appears to have been unauthorized. Is Bond abusing his license to kill for personal motives?

If he is, it seems that MI6 has kicked him out and he’s going rogue (again).

Moneypenny is certainly convinced that Bond will accomplish his mission, especially considering her experiences with him during the events of Skyfall.

Here we have Q’s reveal of the Aston Martin DB10 to Bond, which is confusing matters. If Bond is kicked out of MI6, then why is he getting assistance from Q and Tanner? Could it be that MI6 is staging Bond’s departure as a cover for him to go on an undercover mission to give them deniability?

Here we get a fantastic shot of Bond’s Aston Martin in the middle of a car chase with SPECTRE henchmen Hinx in Italy. Check out that incline they drive on. This should be quite a sequence.

Bond making a final request to Q after presumably getting his car and the rest of his gadgets: make him disappear. This seems to be supporting the idea that MI6 is disavowing him to allow for a deep cover mission.

Here are some shots of snow covered country, presumably in Austria where spent a fair amount of production time. Now, who could be hiding out in this rather large cabin with the scenic mountain location?

It’s Mr. White from Casino Royale and Quantum of Solace with a set up that looks like something out of a 90s hacker movie. He’s looking like something of a hobo. Is he in hiding because Bond helped dismantle Quantum or because SPECTRE is looking for him?

Bond has somehow acquired a ring with the SPECTRE symbol on it. Perhaps from his target in Mexico City? Bond is asking where “he” is, which we can only assume is Christoph Waltz’s character.

We’re in Rome now as Bond is meeting with Monica Bellucci’s Lucia Sciarra, who is reportedly the widow of an assassin killed by Bond. We’re assuming that assassin is the fellow Bond killed in Mexico City.

Here’s Dave Bautista’s henchmen Mr. Hinx, deciding to break a guy’s neck for reasons we’re sure will be much clearer in the film.

We’re back with Bond and Mr. White now. Bond is convinced Mr. White is protecting someone…

… and that someone is Dr. Madeline Swann (Lea Seydoux), who according to the recently released synopsis of the film is Mr. White’s daughter. It seems SPECTRE wants her for some reason, which may be why she’s in a vehicle with Mr. Hinx. Are they abducting her?

Either way, she doesn’t seem very happy Bond wants to save her. Something tells us she’s not a part of the family business and hates the fact she’s been caught in the middle of it.

… and here we see Bond is the one piloting the plane.

It seems Bond is going to some really extreme lengths to free her, which Swann can hardly believe.

But as Bond tells her, he and his crazy antics are the only thing that can save her life. But from who?

Could it be from this meeting that appears to be made up of the assorted leadership of SPECTRE?

Here’s SPECTRE’s logo on Q’s screen. Are they punking him after he attempts to hack them? It seems Bond and Q are looking into the members of SPECTRE and discover somehow James Bond is their point of commonality.

Bond goes to a (presumably MI6) memorial wall to find his name in graffiti. Is he walking into a trap?

Now we get into dialogue from Waltz’s character Franz Oberhauser where he reveals he’s been ingrained in events from Bond’s past. We have this shot, which seems like it might be from Silva’s island in Skyfall… but we’re willing to bet it comes from the aftermath of Bond’s explosive assassination in Mexico City.

Oberhauser at the SPECTRE meeting, who looks up at Bond who probably thinks he’s under cover. After that look, though, we’re pretty sure Bond knows the cat’s out of the bag. It’s either that, or he immediately recognizes Oberhauser and is completely floored.

Bond makes a daring jump for his car, presumably after Oberhauser blew is cover at the SPECTRE meeting. Big Bond fans will notice the theme from On Her Majesty’s Secret Service plays over the rest of the trailer, which is really cool. Wouldn’t it be awesome if they brought it back for the theme song in this film? You can listen to the original theme in the video below:

Now we get some more shots of the Rome car chase between Hinx and Bond. 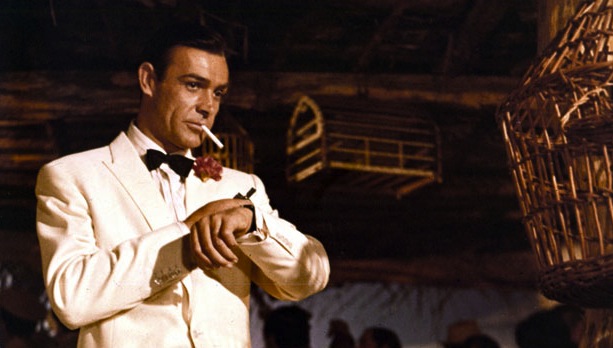 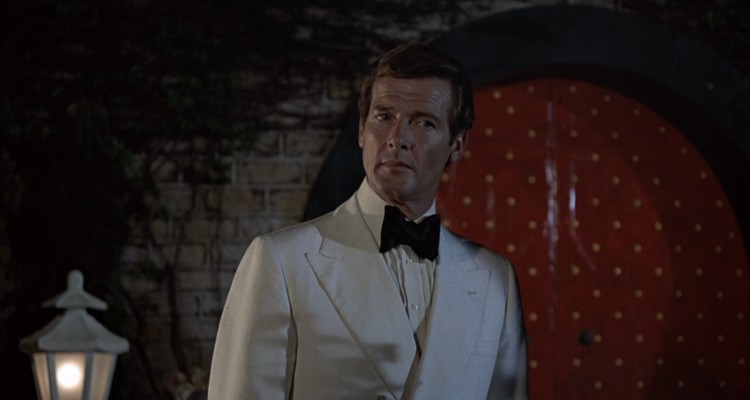 Here’s another classic Bond callback: the white tux, which was a staple of Connery and Moore era Bonds.

It seems he’s meeting Dr. Swann for a drink on a train.

Here’s a random shot in a shooting range. Is Bond being stalked or chasing someone?

Here’s a quick shot of Mr. Hinx and Bond fighting on the train around the same time Bond is meeting Swann, given that he’s wearing the same tux.

Lucia Sciarra, who looks like she’s about to be executed (and knows it) before saved by someone with a silenced pistol. Presumably, that someone is Bond.

Bond takes some guys out at what looks like a snowy mountain base. If you look at the name on the door and the building, it says “Hoffler.” Could that be a front company of some kind SPECTRE is using for cover?

More shots of Hinx, Swann, and Bond on the train. We’re willing to bet this sequence will probably play out like an homage of the train sequence in From Russia With Love.

This looks like a continuation of that shooting range scene.

Now we have a helicopter doing a corkscrew, which is insane. The only thing more insane is that Bond is on board having a melee fight at the same time.

Here are Bond and Oberhauser at a funeral. Could it be for that assassin Bond killed?

This shot looks like it’s from Bond’s Italy escape when he’s still trying to get to his car.

Now we’re getting somewhere: the SPECTRE lair, which looks like a cross between the set of a Nolan movie and the Connery SPECTRE lairs. It seems Bond has been captured. 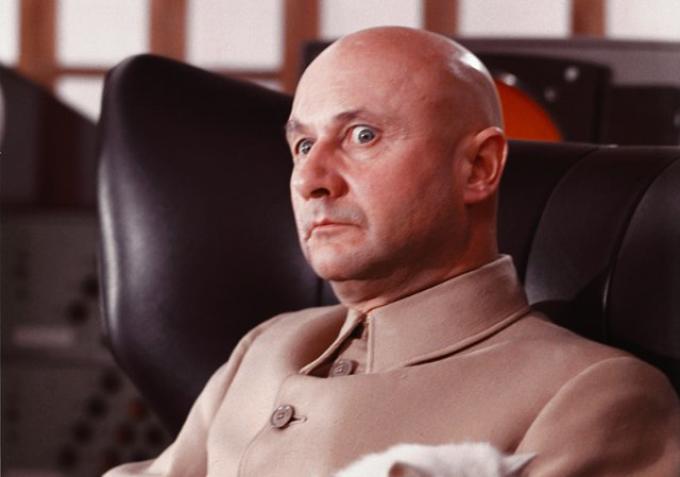 Here’s another shot of Oberhauser gloating to Bond about causing him a ton of pain while dressed in a very Blofeld-esque garb.

And here’s Andrew Scott aka Moriarty from Shelock, who with that scowl we’re guessing is a SPECTRE agent despite the fact he’s listed as playing a member of the British government.

Another shot of Bond in the SPECTRE lair, with some very 60s lighting on him.

Here’s an action shot of Bond storming that helicopter from earlier.

Bond kissing Dr. Swann and surprising no one in the process. Though, we have to admit it’s a little weird he’s kissing the guy responsible for Vesper’s death. We suppose this could be considered some immature revenge.

Bond’s plane is crashing through a cabin filled with fire wood. Awesome.

It seems we’ll also get a boat sequence in the film with Swann driving and Bond shooting. This means we have action sequences with pretty much every major form of modern transportation. That’s quite a feat.

See anything in the trailer you think we missed? Let us know in the comments!

Aaron Edwards is a Los Angeles based screenwriter and filmmaker. On one faithful night when he was five, he sneaked out of his room and watched Aliens on cable. Soon after, he fell in love with storytelling and has been a big ol' nerd ever since. You can follow him on twitter @aaronmedward
You might also like
James BondSkyfallSpectreMoviesFeatures

by Aaron Edwards on November 13, 2015
After fifty years, the James Bond series has become its own genre. However, a hero is only as good as his villains and Bond has had some classic ones in his time. With the news that the upcoming film SPECTRE will be tying together plots from the first [...]

James Bond 007 Canon Catch-Up: What Is The SPECTRE Organization? [Updated]

by Aaron Edwards on November 13, 2015
And where has it been all this time?