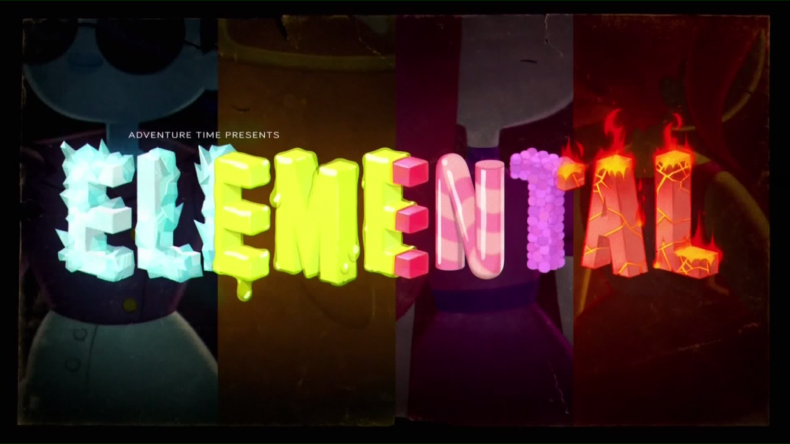 On the latest Adventure Time episode, “Elemental,” an ice elemental named Patience St. Pim awakens and reveals her shared destiny with Princess Bubblegum, Flame Princess, and Slime Princess. It’s the eponymous time again!This season’s been heavy on standalone episodes while keeping mythos to a relative minimum, and there’s nothing wrong with that. But it’s pretty refreshing to see the series return to its impressive narrative cosmogony with “Elemental.” The episode opens up new connections, and lends greater significance to the series’ array of princesses. Most satisfying, though, is the ambitious exploration of fate, the way adult fears of mortality are so similar to a child’s fears of aging, and how small these human fears feel on the scale of cosmic seasons and cycles.

The episode’s beginning sees the coathangers of Ooo mysteriously stolen, and once Bubblegum enlists Finn and Jake’s aid, they discover (unsurprisingly) Ice King as the culprit. They reluctantly follow him back to the Ice Kingdom to see what all the hangers were for: Ice King made a giant fishhook to pick his keys out of a massive crevice. Tunneling deep into the crack, they discover a giant disco ball made of ice, which shatters to reveal a smartly-dressed woman in a sailboat, crafting little figurines out of coathanger wire. 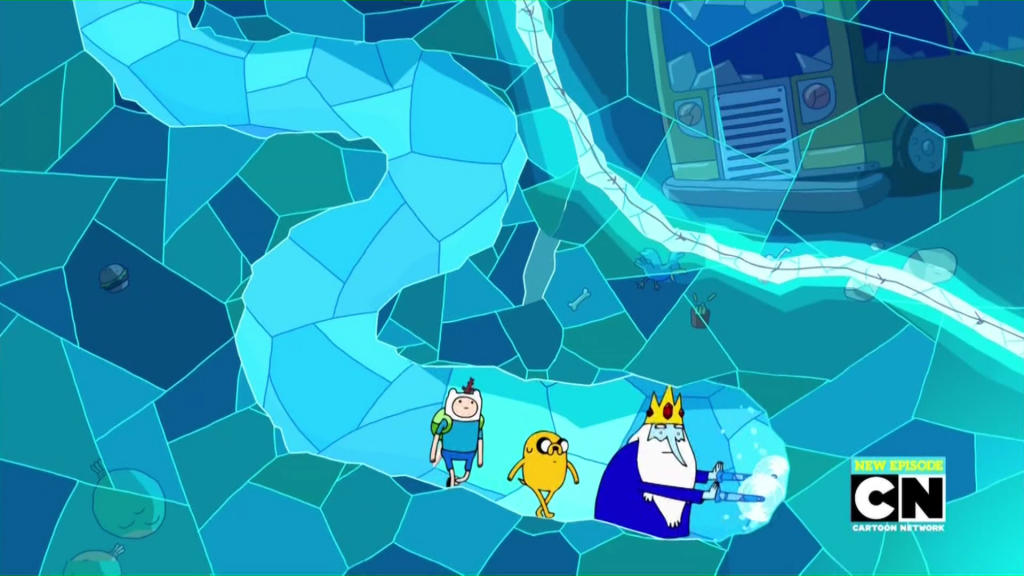 The woman is none other than Patience St. Pim, whose moniker’s every bit as sprightly and slightly obnoxious as her personality. Patience is fidgety, self-centered, manipulative, and fantastic as a brand new antagonist for the series. She reminds me a lot of Magic Man (god rest his crazy diamond soul) in her unhinged demeanor and overall unpredictability. Like lots of Adventure Time antagonists, Patience is only evil in the sense that her motives clash with those of others. Her excitability is childlike, and she never intends to actually harm anyone–nonetheless, she wastes no time working her feminine wiles and dance moves on Ice King, convincing him to round up Ooo’s Candy, Flame, and Slime Princesses for her. Aside from her dynamic personality, she’s also quite powerful, disabling Finn and Jake with ease when they protest to her sudden nefarious demands.

Ice King certainly looks like he’s having fun, getting back to his old hobby of kidnapping women. Once all three are delivered to St. Pim, she partially unfreezes them and greets them with surprising warmth; Patience explains that she’s getting the band back together, and by band, she means the eternal elemental quartet that reincarnates with every generation. The princesses look confused, and Patience elaborates, describing how the four elementals of Fire, Ice, Slime, and Candy have always existed on this planet, with abilities commensurate to the period’s magical-ness (the present moment being quite non-magical, and Ooo being crazy magical). Patience had been our present’s ice elemental, and though she and her comrades were weakened by our non-magical present, they had the ability to foresee a coming “transition” in the world, in the form of the Lich and the Mushroom War that created him. 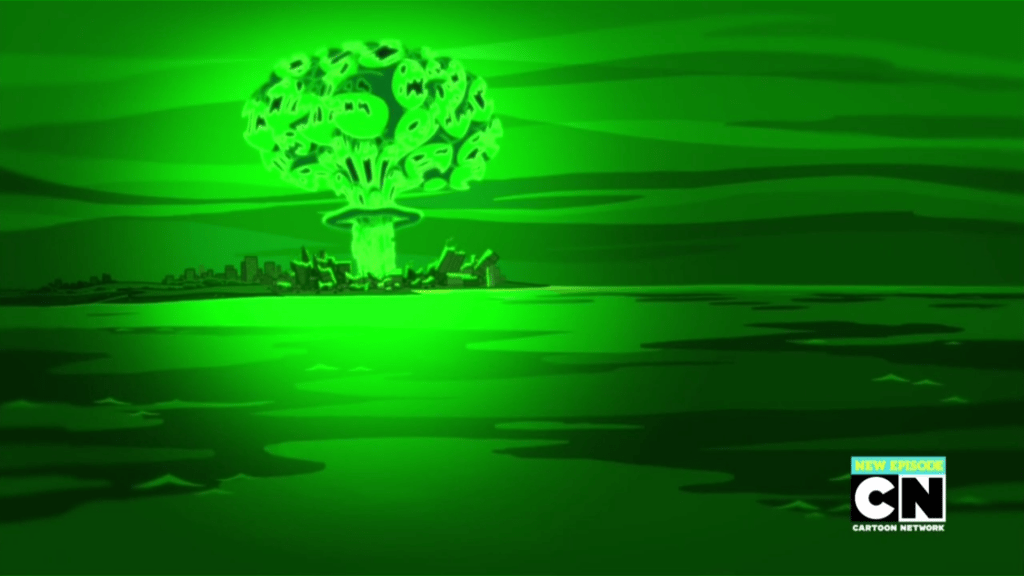 Adventure Time has always been very big on the theme of change and aging, especially the transition from childhood to adolescence, which was especially important back when Finn was the focus of the series: we watched Finn learn about women, death, fate, etc., and the prevailing theme every time was acceptance: everyone grows up, period. With this new arc regarding the Elementals, we’re seeing the same theme played out on a much grander scale. When the present-day elementals see the coming destruction, Patience plots to freeze them all so that they can hibernate and survive the cataclysm. However, the other three refuse, saying that they’ve accepted the fact that the elementals always perish and return, but Patience was in denial.

What’s unfolding now is the transition from adulthood to death, an ordeal which looks largely the same as Finn’s maturation. It’s impressive how Adventure Time has stayed true to the same core messages, elaborating upon them with concentric arcs. The fact of the elementals’ reincarnation lends an optimism to the series’ mythos: if destruction and reincarnation are both recurring, then there is no true destruction, only changes. We saw the same idea in childhood-centric episodes like “The More You Moe, the Moe You Know,” in which little BMO is anxious about growing up, fearing that his personality as he knows it will dissolve once he’s grown; the child will die, giving way to someone entirely different. The elementals’ reincarnation expresses the idea that even though change is inevitable, there is an essence that remains the same, but that isn’t good enough for Patience. In fact, it seems it’s never been good enough for the ice elementals. 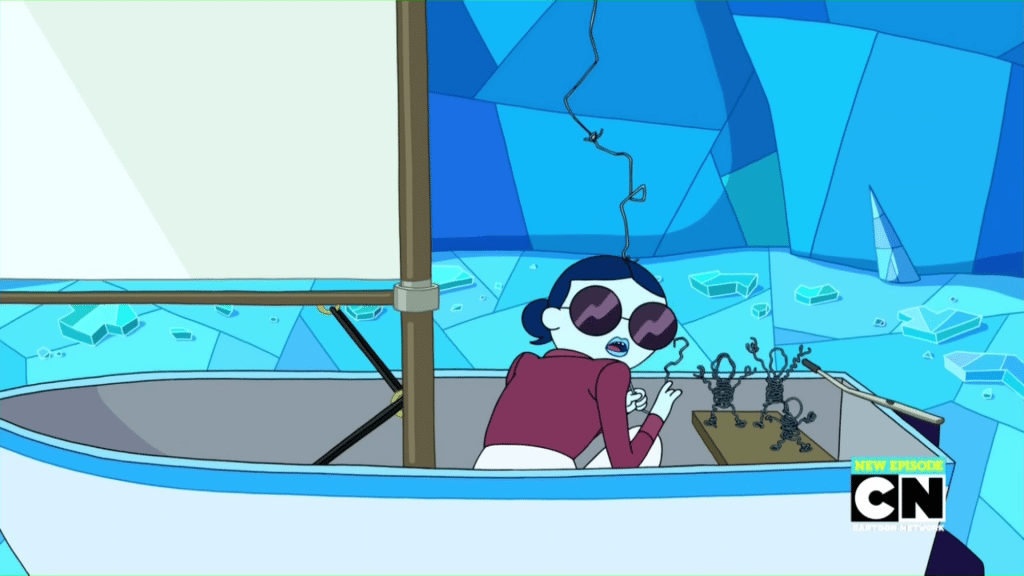 The irony of Patience’s apparent rebellion is that even though she’s attempting to cheat fate, her personality plays right into what looks like fate’s schemes for the ice elemental. In a past life, Patience had been Urgence Evergreen, the prehistoric Ice Wizard who attempted to stop the recurrence of the Catalyst Comet’s apocalyptic impact by empowering himself with the Ice Crown. At that time also, the other elementals had protested, saying that death isn’t something to be feared–not that Evergreen would listen, obsessed as he was with his own abilities. Patience bears all the same traits: she’s absolutely dazzled with her ice powers, and wanted to survive into the future to explore the range of her abilities and showboat around. In a short but telling moment, Patience comments on how PB looks 18, and laments her own old age (28 is old, I suppose), thus hinting at an underlying fear of death and aging. It seems that the ice elemental will always be the obsessive, isolated one of the four. Though St. Pim revels in her own individuality, she’ll never know that she’s simply enacting another trope, another recurring cycle. It’s quite sad, especially when you figure that all she wanted to do was to feel special, be a part of a group of special people. The coathangar figurines she was crafting were probably her own friends, whom she couldn’t wait to see again.

After relating their history together, Patience reveals Slime and Bubblegum Princess’s own latent elemental abilities, which they use to handily defeat her (of course Slime beats Ice). They leave her to her own devices, humiliated and covered in slime. The episode closes as Ice King finds his keys (in his mouth) and Patience promises to appear again.